In this newsletter we continue with our story on the Swartberg Classic Tour. This chapter deals with the drive from Bosch Luys Kloof to the Nelsrivier Dam via Calitzdorp.

Day 2 of the tour dawned warm and sunny, the temperature would later rise to 36C. With the customary radio checks done we bade farewell to the lovely Bosch Luys Kloof Lodge and ascended the Bosluiskloof Pass with the sun behind us, but the one thing there was no shortage of was dust! Throughout the tour dust caused the convoy to spread over a large distance. This requires regular stops by the lead vehicle to allow the convoy to regroup to ensure clear comms.

It's always interesting how different a pass feels driving it in the opposite direction. Bosluiskloof and Seweweekspoort were prime examples. The latter took some time as our guests were stopping to take photos - lots of them - in the perfect early morning light.

Once back at the R62 we hooked a left (east) to drive the tarred Huisrivier Pass. The 13,4 km long Huisrivier pass lies on the R62 between two valleys in the Little Karoo between the towns of Ladismith in the west and Calitzdorp in the east.

It has 39 bends, corners and curves packed into that distance, which requires vigilant driving. Not only is this a fairly long pass, but it has many sharp corners and exceptionally attractive scenery. Many lovely rest areas have been provided by the road builders.

This pass is unique in that its geology is unusually unstable (shale) and several pioneering engineering techniques had to be applied to successfully build a safe all-weather pass. The pass, which includes three river crossings, is not particularly steep, where the engineers have managed to limit the steepest gradients to a fairly comfortable 1:10. 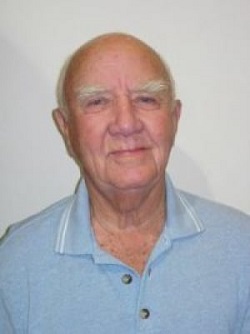 The engineer responsible for this pass was the late Dr Graham Ross, who authored the book "Romance of Cape Mountain Passes". Dr Ross took an active role in the early years of the MPSA project offering valuable guidance on road engineering and history. We will remain forever in his debt.

The port of Calitzdorp

After enjoying the Huisrivier Pass scenery, we descended into the wide Klein Karoo valley to Calitzdorp, known for its excellent port wine and the hot mineral springs south of the town.

Calitzdorp is also known for its beautiful gardens featuring splendid bougainvillea and the wide variety of special architectural styles of the village houses which date from the founding of the village in 1821.

The farm on which Calitzdorp stands was granted to JJ and MC Calitz in 1831, who named it Buffelsvlei. During the pioneering days hunting was good and by 1845 a community centre was established after the establishment of several homesteads.

The Dutch Reformed Church, declared a national monument in 1991, was originally built in 1857 and hosts a magnificent organ, large even by European standards. Richard van Reenen Barry was the first pastor and served the community for 40 years. In 1910 the population reached 4000 and it was decided to build a new church.

1912 was an important year as the new church was erected in the neo-Byzantine style with a Marseilles roof. The same year the new school building was also completed, and a start made with the building of the old Standard Bank building, presently housing the museum, as well as the Nelsrivier Dam. 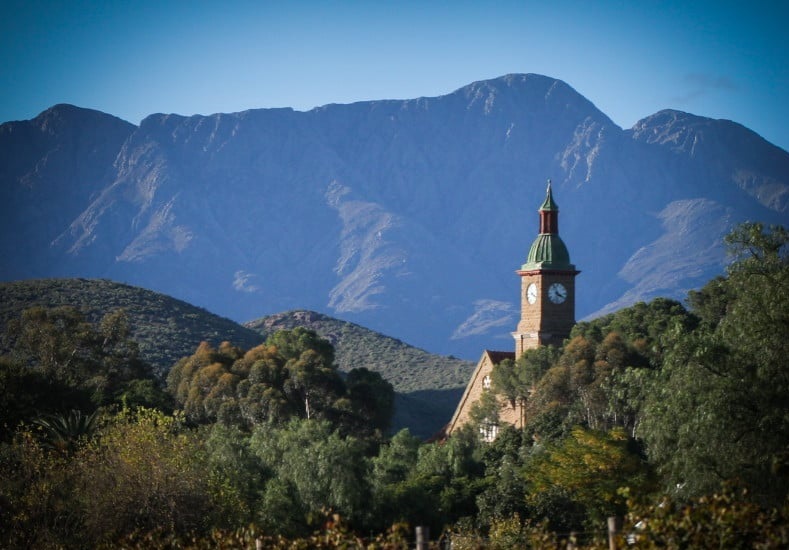 Subsequently drought, the great flu epidemic and the collapse of the ostrich feather industry all hit the area hard. However economic recovery followed with the opening of the railway line (1924), electrification of the town and the construction of a cement road between Calitzdorp and Oudtshoorn, also a first for South Africa (1937). The new R62 highway was built in 1978.

After refuelling some of the vehicles in Calitzdorp, we left the R62 and took the gravel road north leading to the Calitzdorp Dam, or more correctly the Nelsrivier Dam. 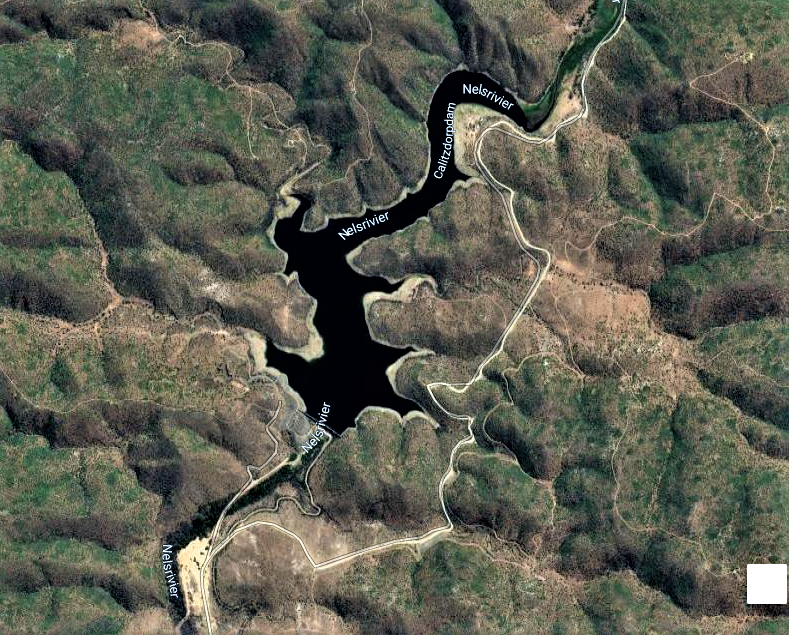 Satellite image of the Nelsrivier Dam showing the road on the right. / Image: Google Earth

The winding road along the gravel eastern side of the river valley is an unnamed pass in itself and offers elevated views of the dam and surrounding dams. The dam has an interesting history and is one of the oldest in South Africa. Camping, fishing and boating is available.

Tucked behind Besemkop in the Nel’s River valley, about 5 km north of Calitzdorp in the Little Karoo lies the Calitzdorp Dam or, more correctly, Nelsrivier Dam. Completed in 1918 it is South Africa’s first and oldest concrete gravity dam that was built for irrigation purposes and that is still in working condition – a living pioneering engineering achievement. 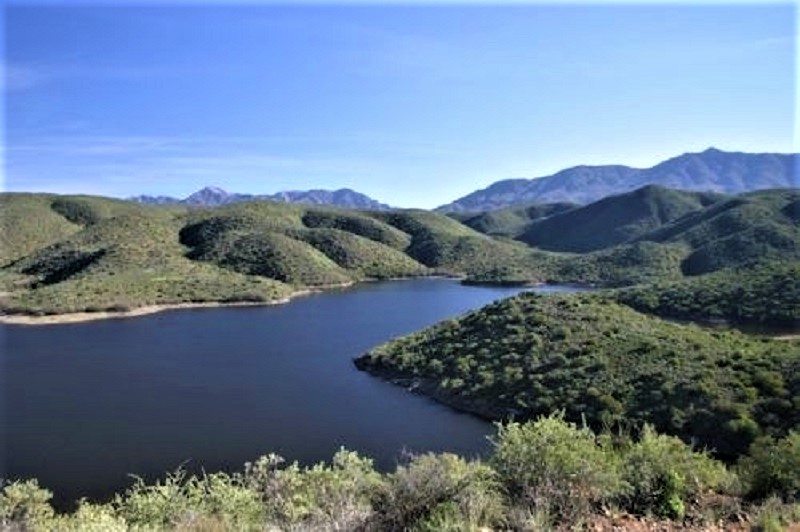 Nel’s River Dam, which took about five years to build, comprises approximately 110 000 cubic tons of concrete. The dam wall has a height of 18 m and length of 213 m. The spillway consists of a low concrete overflow with a drainage canal that was blasted into the side rock and left unlined. The permissible height of the overflow is 1.8 m. The dam provides water to 70 irrigation users of the Calitzdorp Irrigation Board with their 520 ha of scheduled irrigation lands, as well as the approximately 4 700 residents of the town.

Next week: Kruisrivier Valley to the R328

Paraprosdokian of the week: "Change is inevitable - except from a vending machine".