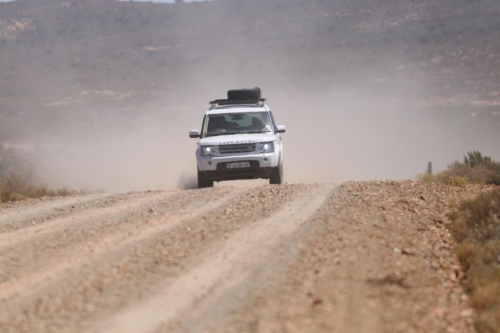 There was no shortage of dust! - Photo: MPSA Tour Group

The week that was...

This week we continue with our report back on the Swartberg Classic Tour.

Our journey continues from the summit of the Gysmanshoek Pass.

At the northern end of the Gysmanshoek Pass, we connected with a good gravel road and drove east to the tarred R323, where we visited the Muiskraal farm. Anyone who has ever driven the R323 will instantly recognize the entrance gates which are very distinctive.

The pass to the south of the farm (Muiskraal Pass) leads up to the summit of the much more famous Garcia's Pass. It was getting hot so we made use of the shade inside the Muiskraal farm stall, where we made the farmer's day as our guests bought armfuls of olives, preserves, jams, juices and dried fruit. Ka-ching, ka-ching, ka-ching!

The olive oil tanks are in the same building and if you enjoy cooking with olive oil, we recommend you stop here as the prices are very good and the quality excellent. We had decided to omit the slow drive over the Brandrivier Pass to make up time and continued on to Ladismith via the Voetpadkloof, Kruippoort and Naauwkloof passes, the latter which delivers perfect views of the cleft peak, known as Towerkop.

From Ladismith our routing took us to the settlements of Zoar and Amalienstein, where we stopped at the old church for a leg stretch and some photos. The mercury had crept up to 33C and the vehicle air conditioners were working hard. The second highlight of the day beckoned - the incredible Seweweekspoort.

Just as one enters the poort after the second bridge, a small two spoor track leads away into the bush. It heads up to the Tierkloof Dam. The spot is particularly attractive as the contorted and twisted Cape Fold mountains confine the narrow kloof and the river that flows along its little valley.

The road winds over the river three times over neatly constructed causeways smothered on either side by dense riverine vegetation, then levels off, revealing the dam wall, which towers over the road. If you're feeling energetic, you can climb the "stairs" all the way to the top to enjoy the views, but be warned it's very steep. The dam is narrow and deep (like well-designed dams should be) and provides fresh potable water to Zoar and Amalienstein.

The unmatched majesty of SeweweekspoortSeweweekspoort never disappoints. On this tour we drove it in both directions over two separate days. The roadworks have been completed and it is in excellent condition. In fact the vast majority of gravel roads we drove on this tour were very well maintained (bar the first 8 km of the Otto du Plessis Road / Gamkaskloof). Well done Western Cape government

The Seweweekspoort is probably the most beautiful 18 km stretch of gravel road anywhere in South Africa. With easy gradients, multiple river crossings, mind-boggling geology, camping and self catering accommodation all packed into an almost perfect micro-climate, this road is an absolute joy to drive or ride, as it twists and turns through every angle of the compass, as it follows the contorted bends of the river and falls entirely under the control of Cape Nature Conservation and more specifically the Swartberg and Towerkop Nature Reserves. It is also a certified Unesco World Heritage Site. This poort is one of our Top 20 all time favourite roads. Add it to your bucket list!

Bosluiskloof Pass was the last pass scheduled for the first day of the tour. As one crests the summit point, a dramatic view presents itself, with row upon row of hills and peaks fading away into the east. Here the road begins descending along the northern flank of a steep sided kloof and where Thomas Bain's brother in law, Adam de Smidt's stonework can still be seen holding the road up almost 150 years later.

Beautiful BosluiskloofThis is one of the most spectacular gravel passes in the Western Cape offering stunning scenery of craggy mountains, vertical rock walled poorts, old-school engineering, game spotting, birdlife and a fabulous 4 star lodge to ease weary travellers into the bushveld way of life.

This historic pass dates back to 1862. The road is named after the many fossilised ticks found in the rocks when the road was built. This used to be the main road between Laingsburg and Prince Albert up till the late 1960's when the Dept. of Water Affairs built the Gamkapoort Dam, which had a number of consequences, including making this road obsolete.

At the end of our first day we arrived at the Bosch Luys Kloof Lodge set in a valley near the foot of the Bosluiskloof Pass. Here you will find utter peace and quiet. There's no cell reception. The hush of the bush envelopes you and the city stresses fall away.

The main lodge building houses the reception area, a large lounge, deck area, swimming pool, kitchen, dining rooms and a very cool pub. The chalets are set along the ridge to the east of the main lodge. Each has a unique view of the valley and mountains and most of them sport an outside shower. What nicer way to wash the day's dust off?! 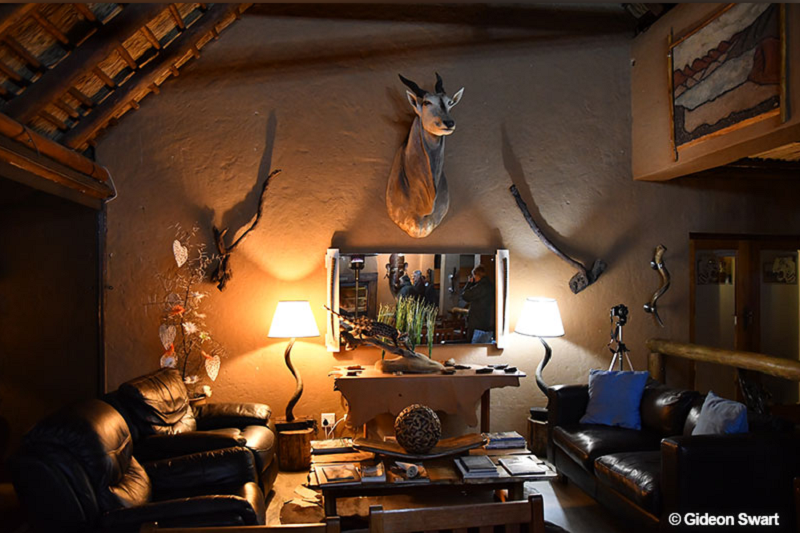 One of several cosy corners in the main lodge

Bruce, Henry and the staff welcomed us and after slaking our thirsts in the pub , we were served with dinner - what better than lamb shanks in this part of the world? The night was warm as a million stars lit the way back to our chalets for another good night's sleep.

On arrival at Bosch Luys Kloof on the second night of the tour, one of our guests, Ken Vorster, (who is a distant relative to BJ himself) could not find his phone. An hour was spent completely unpacking his vehicle and all his luggage. No phone! The next day as we were approaching the R62 (and mobile reception) we received a message from Rotterdam Hotel in Swellendam that they had found Mr. Vorster's phone in the bathroom. I immediately relayed the good news to Ken over the radio. To say he was delighted was an understatement. What they didn't specify was that the phone was actually found in the toilet bowl! After the tour was over, Ken detoured to Swellendam to collect his phone. Imagine the disappointment to discover it had been lying in water overnight! The story is that he was wearing a jacket with shallow pockets. You have been warned! 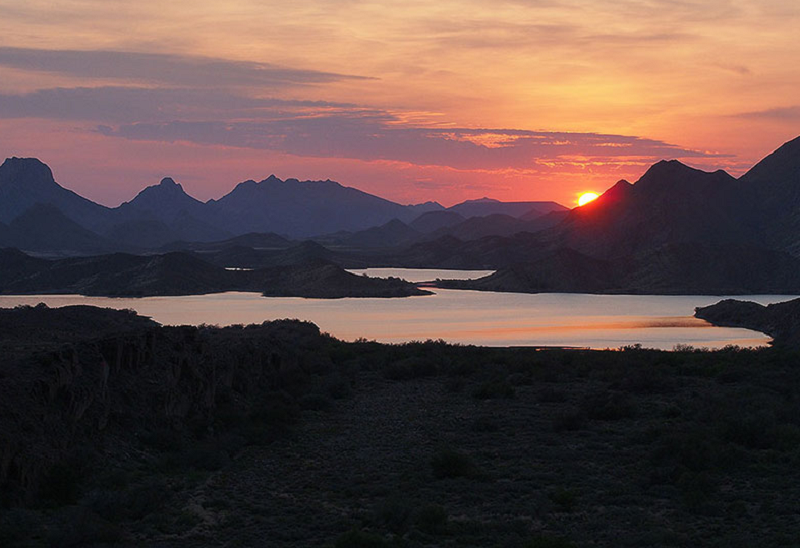 Over the past approximately 160 years until ±1970 different parts of the reserve were extensively used for stock farming, mainly merino sheep. Currently it extends near 14 000 hectares, but it was of still greater magnitude before the Gamkapoort Dam was built in 1967 – 1969 on the eastern side of the property.

The Dam cut off a few thousand hectares and also blocked off the former road to Prince Albert. Although many different owners farmed with livestock until ±1970, only small scale herding has taken place since. The reserve thus fortunately had a period of natural rehabilitation of 40 years plus. The veld in some areas is untouched by grazing but other areas were not that fortunate.

Since the building of the dam the veld had time to rehabilitate causing it to improve every year. Much however depends on the rainfall patterns. The well known Spekbos (Portulacaria afra) footprint is increasing nicely. The reserve still has remnants of old stone structures, used by shepherds of the stock-farmers of the past. There are also a number of old graves from the middle 19th century. There were four main farmsteads on the present reserve land.

The cuisine was top class at the lodge and it was a happy, but tired group that hit the sack that night under a warm, dark and starry night.

Next week: Bosluiskloof to Calitzdorp

PODCAST: We chat about the first half of Day 2 of the recent Swartberg Classic Tour. CLICK TO LISTEN

New Dictionary: " A clear conscience is a sign of a fuzzy memory"