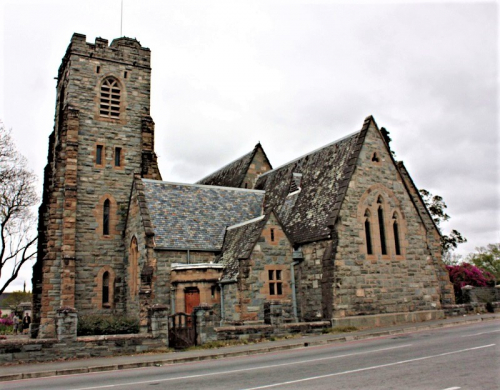 AUGUST 23rd (Sunday):
Elgin-Grabouw 4x4 Tour - To be launched early next week. This is a one day tour (allowed under current lockdown rules) offering lovely scenery of mountains and lakes amongst fynbos and pines. We can take 10 vehicles on this tour. The grading ranges from 1 to 5, but there are escape routes on most of the difficult obstacles. We will only drive up to Grade 3 level. This tour is suitable for novice and intermediate 4x4 drivers and will double as an introduction to offroad driving. You will need a 4x4 with low range. Bookings will open by Tuesday 4th August . Distance 27 km. 4 to 5 hours duration. Only open to residents in the Western Cape.

Last week's article on the manganese mine in Du Toitskloof sparked a lot of interest and the snippets of unusual history that we weren't privy to at school, are quite captivating. Today we start Part 1 of a series on the Forts of South Africa. The article was compiled  for the Grahamstown Historical Society by Eily Gledhill.  Photographs by Rex and Barbara Reynolds. Published by the 1820 Settlers National Monument Foundation.

The initial disasters of the war which commenced in March, 1847 were severe.  Elands Post was abandoned.  A strong punitive force under Col. Somerset which had pushed across the border of the Colony to Burn’s Hill near Fort Cox, had to retreat to Block Drift but at the Keiskamma River crossing another heavy attack resulted in the loss of half of the 125 ox wagons carrying military stores.  Peddie was invested.  In Lower Albany, Cuylerville, Bathurst and the fortified farmhouses were besieged.  Refugees flocked to Grahamstown where the streets were barricaded.

Eventually Fort Peddie was relieved via Committees Drift and Trompetter’s Drift and the Battle of the Gwanga ended in a resounding victory for the Colonial forces.

Fort Dacres.  A temporary earthen fort was built by seamen of H.M.S. President on the west bank at the mouth of the Fish River as a base for troops crossing into the war zone.  It was named after Admiral Dacres.  Reinforcements also came by sea from Cape Town and some were landed at Waterloo Bay immediately east of the river mouth.  The campaign was pushed eastwards and an advance base was set up at old Fort Warden for the final push across the Kei River. 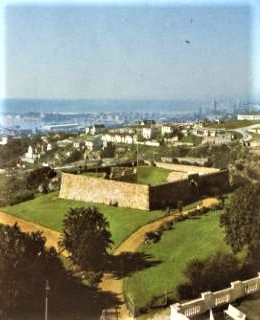 Fort Hare.  The new Governor, Sir Harry Smith arrived in December 1847.  On landing he issued two proclamations:  the first extended the boundary of the Colony to the Keiskamma River thus re-incorporating the old Ceded Territory.  The chief town was to be Alice and Fort Hare was built to protect it.

The Forts of British Kaffraria.  By the second proclamation the territory between the Keiskamma and Kei Rivers became British Kaffraria, this was virtually the former Province of Queen Adelaide.  Re-occupation of Sir Benjamin Durban’s old forts started immediately.  Fort Hill was in ruins but KingWilliam’s Town was re-built as headquarters for the troops in British Kaffraria.  Col. Evelyn wrote of the Rifle Brigade “They built a town, they built a barracks, they built houses for their officers, some of ‘wattle and daub’, some of bricks, and roofed with various materials.  They also made an aqueduct some 3 or 4 miles long to supply the camp with water and for irrigation.  When we left they had had more than half built permanent barracks of stone…”

Fort Glamorgan was established on the west bank at the mouth of the Buffalo River and on January 14, 1848 Sir Harry Smith named the new port East London.

The Military Villages.  At the end of the war discharged soldiers were encouraged to settle on the frontier and four military villages Woburn, Auckland, Juanasberg and Ely were established in and around the upper Tuymie valley.  The experiment was not a success, more than half of the men moved away after about twelve months and the tragedy of 1850 put an end to these establishments.

Fort Armstrong.  The defection of the Hottentots began in the Kat River Valley and spread to Theopolis and Whittlesea.  Hermanus, the Kat River leader, was killed early in January, 1851 when leading an assault on Fort Beaufort.  William Uithaalder, a Cape Corps pensioner assumed command and with augmented forces led an attack on Fort Armstrong.  The whites managed to escape and the fort became Uithaalder’s stronghold and storehouse for plunder.  In February a force assembled at Post Retief consisting of 200 English, 400 Burghers, 200 Fingoes and volunteers from Grahamstown under Commandant Currie.  They proceeded to Fort Armstrong where they met with stubborn resistance.  Reinforcements arrived under Col. Somerset from Fort Hare when other rebels had been successfully repulsed.  The attack was pressed home with two howitzers, the walls were breached and 400 women and children were taken into custody.  The men in the tower held out doggedly and only after considerable effort was the fort recaptured. 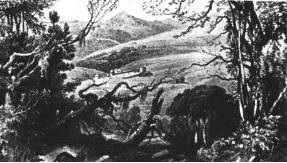 Fort Cox.  The sudden and simultaneous attacks on many parts of the frontier showed that Sandile and his followers had prepared their plans well in advance.  The Christmas Day massacres at Woburn, Auckland and Juanasberg and the attack on the 45th Regiment on the Debe flats were but part of this widespread uprising.  Sir Harry Smith had come to direct the offensive in person and on 23 December 1850 sent out a strong patrol of 500 infantry, 150 cavalry and Fingo police to Keiskamma Hoek.  This force was ambushed in the Boomah Pass with heavy losses.  The Governor was then virtually a prisoner at Fort Cox which was situated on a narrow neck of land with the river far below on either side.  However he succeeded in making his escape with a detachment of the C.M.R. before the fort was completely cut off.  The garrison was eventually relieved in January 1851, the men being then in a weak and emaciated condition.

Castle Eyre.  Sir George Cathcart took office as Governor in march 1852 and by August a large force had been assembled for a concerted drive across the Kei.  Sandile fled and Kreli, chief of the Ngqika sued for peace which was proclaimed in March, 1853.  Cathcart’s blockhouse policy to police the frontier called for the erection of eight towers in the area between the Keiskamma and the Kei.  Only one of these was ever built, this was ‘Castle Eyre’, called after Col. Eyre of the 75th Regiment, and erected on the outskirts of Keiskamma Hoek.  The tower of two storeys was fifteen foot square, with a flat roof which provided emplacement for a swivel gun.

There will be more fascinating history on this subject next week.

Podcast: We chat about Part 3 of the Bain's Kloof Pass and take a visit to the army base in Heidelberg, Transvaal in 1969 for a bit of fun in the sun. Click to listen.

Our featured pass this week is in keeping with the the main story of this newsletter and centres around the area of the Frontier Wars.

Words of Wisdom: "Wake up with determination. Go to bed with satisfaction."