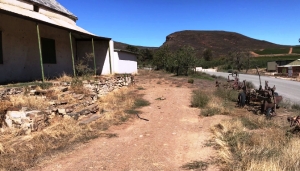 The Bo-Swaarmoed Pass  is located to the north of the much bigger Swaarmoed Pass, 3,5 km kilometers after the Matroosberg/Erfdeel turn-off. It is a gravel road that connects the summit area of the Swaarmoed Pass with the farm Uitkomst (Matjiesrivier) in the lower valley to the north. The pass is also sometimes called the Uitkomst Pass and the Bloubank Pass by locals. This is a very old farm with old buildings, dry packed stone walls and a unique and completely intact slave bell dating back to the early 1700's.

Most of the passes aound Ceres are tarred which tends to lull drivers into a false sense of security. When adding very steep gradients, sharp corners and several bends which have negative banking, this pass has the potential to become very dangerous and doubly so during snow or after heavy rain for unattentive drivers. Don't be fooled by the mild statistics or how easy it looks on the video. It is safer to ascend this pass than descend it. Speed needs to be drastically reduced if you have approached from the south via the Swaarmoed Pass.