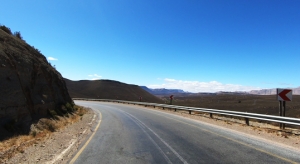 Ceres has an abundance of passes connecting it to the outside world. One of the oldest is the Hottentotskloof Pass, which was the original wagon route between Cape Town and the Karoo through Ceres, long before the N1 was thought about. Together with the Karoopoort these two passes carried considerable wagon traffic to the northern parts of South Africa. The  modern pass we drive on today does not follow the original wagon route, which is slightly further south, a little lower down the slope. The careful observer will be able to trace the old road and it is clearly visible on Google Earth, but no longer publicly accessible.