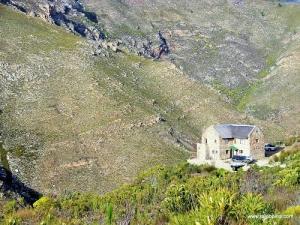 This seldom driven gem of a pass ends in a dead end with a story attached. It is frequently referred to in its Afrikaans format - Boesmanskloofpas and is also called the "Road to Nowhere". The pass connects the town of McGregor with the farm Die Galg at the summit, where it ends. However in the early 1900's there was a strong need to build a road directly from McGregor to Greyton, which is a scant 25 kms to the west. The road was subsequently built and continues over the neck (Die Galg) and then descends along the northern side of the ravine, where the road was literally hacked out of the mountainside. This proved to be an onerous and expensive project and was abandoned due to lack of funds. 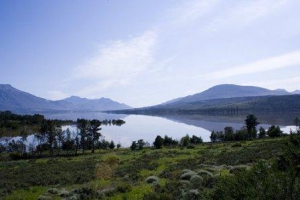 Floorshoogte is a 16 km long tarred pass on the R43 between Villiersdorp and Caledon. It climbs/descends 257 meters to summit at 525m ASL producing a comfortable average gradient of 1:62, which is mainly due to an undulating middle section. The initial climb up from the Theewaterskloof Dam to the summit is a long, continuous climb with a gradient of 1:8 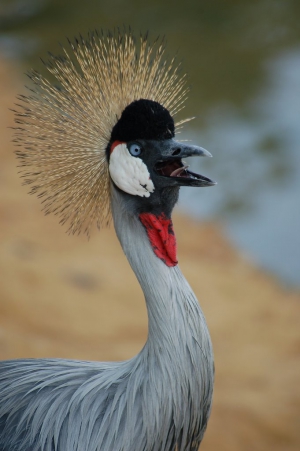 The Dwarskloof Pass is located between the N2 (east of Caledon) and the village of Greyton. It is a minor and completely safe pass and if you didn't know it was an official pass, you would probably miss it completely. It is nothing more than a long descent down a gravel farm road towards the Riviersonderend valley. The gradient is a very easy 1:44 and the steepest part is 1:11. It is perfectly safe for all vehicles and bicycles will have no issues either.

We filmed the pass from south to north to maximise on the beautiful mountain backdrop. Despite the placidness of this pass, it does offer magnificent scenery. In front of you the looming bulk of the Sonderend Mountains form a formidable obstacle, whilst the fields on either side are a mass of rolling hills clad in green and yellow (wheat and canola) in winter and spring. This is also a place you are likely to see South Africa's national bird - the Blue Crane.