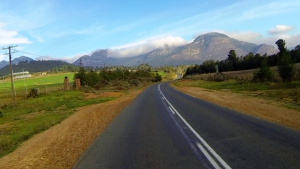 Just north of the Outeniqua mountains along the N9 national route lies a pass that very few people know exists, despite the fact the thousands of vehicles commute over the route daily. The Beveraas Kloof is formed by the north flowing Waboomskraal river that descends from the summit area of the Outeniqua Pass and is fed by at least three powerful tributaries. This lovely section of roadway is mostly overlooked compared to the limelight which inevitably goes to the nearby Outeniqua Pass. The Beveraas Kloof Pass is fairly short at 4,6 km and presents an altitude variance of only 60m producing an easy average gradient of 1:115 with the steepest parts being at 1:11. This road is technically much more of a poort than a pass. It's named after the original farm Beveraas Kloof, which is located on the western side of the road and is frequently listed with the slightly different spelling of Beverass, which is typical of how older names get changed over time to suit a local dialect.