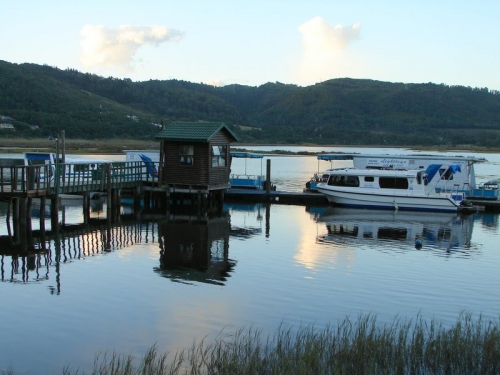 Lightleys houseboats are located at the bottom of the pass - Photo: Panoramio

Getting there: Head east out of Sedgefield on the N2 towards Knysna via the Goukamma Pass. When you reach the summit of the Goukamma Pass, this is where the Keytersnek Pass starts at its western end.

The road begins descending immediately via a wide right hand bend. Within 300m of the summit on the left hand side of the road is a dangerous intersection to the left. 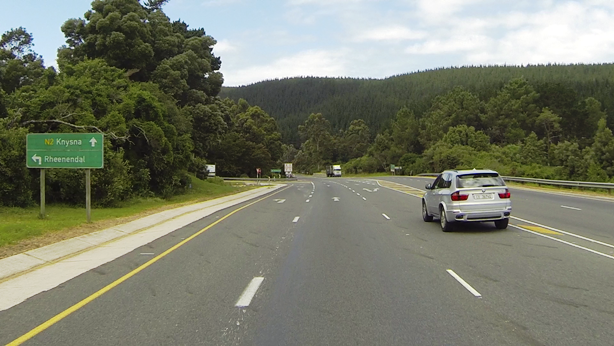 Danger! The Rheenendal intersection / Photo: Trygve RobertsThis road is tarred and heads for Rheenendal and the Millwood old gold mine. It is also a link road onto the 7 Passes Road. It has a dedicated left only lane. If you are turning left here, move to the left early and indicate clearly what your intentions are as the probability of a rear end collision is high. The turn to the left is acute and turns through 150 degrees plus its reverese banked, which means having to slow right down to about 30 kph.

Be particularly careful of ascending traffic wanting to turn right onto this road across the face of two lanes of fast moving traffic.

Once past the intersection, the road straightens out for 1,4 km with a descent gradient of 1:10.

This section is a recipe for disaster for heavy vehicles which are not in the correct gear, as a sharp left hand bend follows at the bottom - the only arrestor bed in sight is the Knysna Lagoon itself! 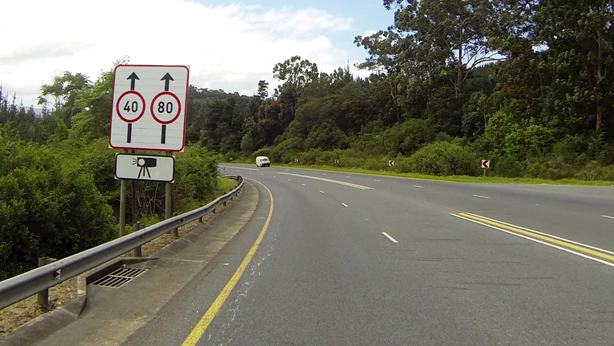 Note the different speed limits per lane / Photo: Trygve RobertsLike the Kaaimans River Pass near George, this descent has different speed limits for different lanes. There are four lanes of which two are dedicated to the descent. The left lane holds a limit of 40 kph, whereas the right lane is set at 80 kph. The temptation to drive faster is enormous as this is a seriously momentum gaining descent, and most vehicles exceed the speed limit, making it a perfect spot for laser camera checking.

The last bend  is a left hand S-bend of which the first one turns through 80 degrees. From this corner the views of the river, lagoon and estuary open up.

The bridge comes up quickly as the road bends to the right through an easier radius. There is another dangerous intersection formed by a T-junction coming in from the left (north). This is the eastern end of the Phantom Pass - the most easterly of the 7 historical Passes. The speed limit for the right lane decreases briefly to 60 kph, then increases to 80 kph once you're on the bridge. The dangerous intersection at the end of the pass / Photo: Trygve RobertsIt's also the access road to the suburbs and villages on the western side of the lagoon including Brenton on Sea and Belvidere Estate. Simlar to the intersection at the summit, this one exhibits the same dangers of slow moving traffic taking chances trying to feed into the fast descending traffic on the N2, and of course westbound traffic from Knysna has a dedicated right lane needing to cross the face of descending traffic. Note that the speed limit is only 60 kph here and if you comply, there should be no real problems. The two lanes feed into a single land at the start of the bridge, causing a bottleneck effect and erratic braking from vehicles travelling too fast.

Lightleys Houseboats operate their fleet of floating holiday houseboat rentals from the river bank to the left. Looking upstream (north) the Knysna River disappears around a wide loop into the green mountains and here the river is still tidal. At low tide there are many acres of mud flats and the various complex channels can be seen forming a web over the vast area of the lagoon. At high tide it forms a vast expanse of sparkling blue water, which is perfect for most forms of boating.

Looking to the right, there are good views of Belvidere on the far side of the lagoon and in the far distance you'll get the first glimpse of famous Knysna Heads. The Brenton Pass is also accessible from the intersection at the bottom of the Keyersnek Pass. The pass ends at the crossing of the river. It's a further 6 km into the town of Knysna via a well constructed, winding road  which follows the banks of the lagoon 2m above the high water mark. Overtaking is difficult due to heavy traffic volumes, large trucks and long stretches of double barrier lines.

||Click to download: Keytersnek Pass   (Note - This is a .kmz file which can be opened in Google earth and most GPS software systems)

Published in The Western Cape
Tagged under
More in this category: « Goukamma Pass (N2) Ganzvlei Pass »
back to top