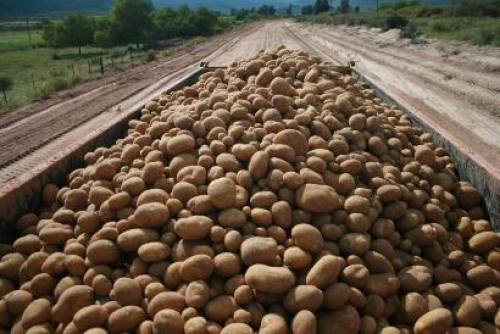 This is an easy gravel poort in the heart of the Sandveld potato growing region that connects a range of local farms. It has a minor change in altitude and a single S-bend in the middle of the poort. Typical of a poort, it sports an easy average gradient of only 1:30 and the steepest section is a mild 1:16. The road is suitable for all cars, bearing in mind that gravel roads can change quickly in wet weather. In the dry season, the road is subject to corrugations, so adjust your speed accordingly. The road runs through a gap on the southern side of the Heerenlogement mountain, which plays host to the famous 18th century traveller's cave of the same name.

Getting there: We filmed this poort from east to west. It can be approached from either direction, but we describe it here in the descending mode. From the N7 at Trawal (which is 43 km north of Clanwilliam), take the gravel road (P2197) to the left at GPS S31.886898  E18.632943. The road heads in a south-westerly direction up the Fonteintjiesberg Pass for 14 km following the railway line on your left, to arrive at the eastern start of the Ratelfontein Poort.

After a fairly flat terrained approach through vast fields of potato fields and citrus orchards, the Heerenlogement mountain can be clearly seen ahead dominating the skyline. The road heads purposefully towards the southern end of this mountain to breach a narrow poort formed between the Heerenlogement mountain and the two more southerly mountain formed by two peaks - Lea se Kop [344m] and the higher Kliphoutkop [450m] slightly further to the south. 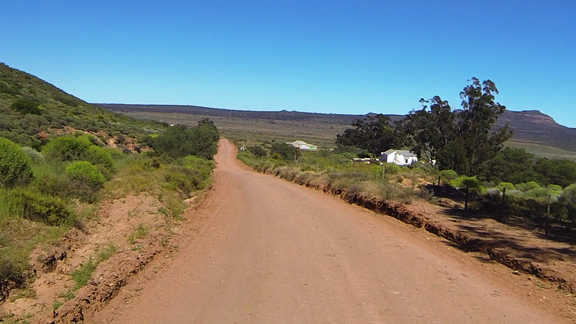 The Noupoort farmstead is on the western side of the road / Photo by Trygve RobertsThis narrow devide through the mountain is shared by a small stream, the road, the railway line, which can be seen close to the road a slightly higher elevation and a farm appropriately called Noupoort (Narrow Ravine).

From the start the road is dead straight into the south-west as it rises gently and imperceptibly up to the summit point of 291m ASL and descends just as gently towards the Noupoort farm, which is on the right hand side (west) of the road adjacent to the only sharp bend amongst a cluster of bluegum trees.

Slow down near the farm and expect farm vehicles at any point along this section. The farmer will also appreciate it if you keep your speed down in case of livestock on the road as well as keeping dust levels down.

After the farm the road bends into the east and then straightens out for the final part of the descent, where the gradient is 1:16, which is moderate to easy. Far ahead in the distance is a range of low, but distinct peaks, collectively called the Klipfonteinkoppe, but each peak has its own name as well. They are from left to right (south to north) - Pankop, Donkerkop, Besemrietkop and Lekfonteinkop.

The pass ends at the T-junction with the main gravel road. A left turn will get you to Graafwater on the R364 and a right turn will take you to the Heerenlogement Cave [5,5 km] 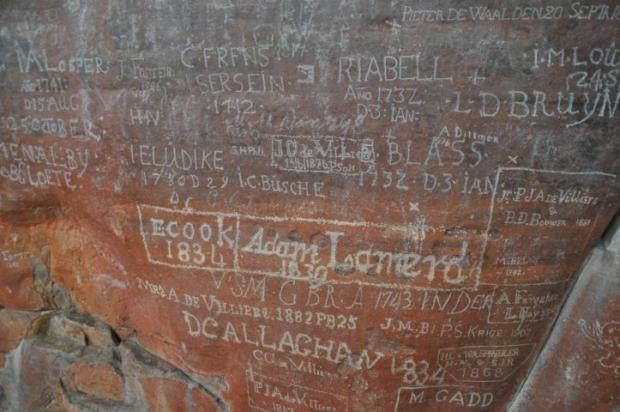 Heerenlogement (Dutch for Gentlemen's Lodgings) is an overhanging rock used as an overnight shelter. Stop at the parking area and walk about 20 - 30 metres to the cave. The walk is worth it as at the mouth of this famous cave, you can see across the Rooibos farms all the way down to the coast.

During the 17th Century, San and Khoi guides had exposed colonial travellers to this refuge,and it soon became a favourite amongst the early explorers. Their names still cover the cave walls.

Originally the cave was used by indigenous San (also known as Bushmen) and Khoi peoples and later discovered by Simon Van der Stel and his party on his way north in search of copper in 1685 and again on 29 October 1712. The best “hotel”, as it was known, was a popular overnight stop for travellers, soldiers, hunters and traders between 1665 and 1682. Today, the cave is comically touted as "The Holiday Inn of the 18th century" 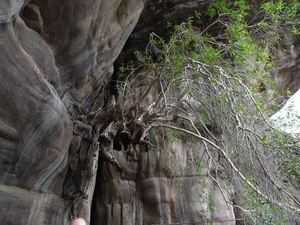 The 300 year old Wild Fig Tree in the caveIn 1682 Olaf Bergh came to Graafwater in search of the legendary gold fields of Monomotapa and was one of the first white people who spent the night there. The cave and its well preserved engravings provide evidence of those early travellers whose journals support the names of the visitors.

Just more than a century after the first colonial ‘guests’ arrived at the Heerenlogement, the jauntiest traveller of them all – Francois le Vaillant – pitched up in full sail. In his hat he wore a large ostrich feather, and he had his infamous scheming Chacma baboon called Kees by his side, and in his wake came a large retinue of Khoi and no fewer than 3 wagons.

They stayed there for a week, fattening their trek oxen and dining on dassies (rock rabbits or hyraxes) before wandering north to the Orange River in search of specimens and thrilling adventures. If you stroll around inside the Heerenlogement, you will find the name Vailant (sic), dated 1783, etched into the stone. You will also find other celebrated names alongside his. This cave contains some of the oldest colonial graffiti found anywhere in South Africa.

The zinc blockhouse dating back to the Anglo-Boer war / Photo: SouthAfrica.netOthers who slept in the secluded cave were Ensign IT Rhenius (1721), the Swedish botanist Carl Thunberg (1774).

Andrew Geddes Bain, the road engineer and father of Thomas Bain, also visited the cave and left his mark. Other well-known travellers also visited the cave during the 19th century were Captain James Alexander and Baron Von Ludwig. Once you’re inside the shallow cave, look up and you will see a 300-year-old tree bulging through a cleft in the rock roof – and it’s still growing strong...

Commander K.J. Slotsbo in 1712 wrote about the tree growing from the cleft in the rock roof which is still in the cave 300 years later. Cape Governor Hendrik Swellengrebel passed this way in 1737 and later wrote an account of this shelter. He mentioned a wild fig tree growing out of a cleft at the back of the cave. The cave has been declared a national monument.

From the cave you can see the zinc blokhouse which was used to stop the Boer soldiers, on the farm Graafwaterplaas, as well as the Oloffs/Bergfonteijn on the farm Klipfontein, 10km south from the Heerenlogement, also one of the oldest rest places on the historical route to the north.

||Click to download: Ratelfontein Poort (Note - This is a .kmz file which can be opened in Google earth and most GPS software systems)

Published in The Western Cape
Tagged under
More in this category: « Kraaiberg Pass Fonteintjiesberg Pass (P2197) »
back to top