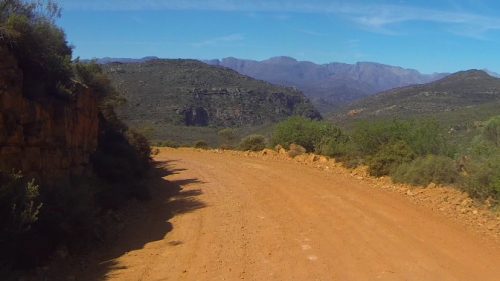 This scenic pass of 4,16 km descends through the attractive Diepkloof - a hidden kloof in the Swartberg and Skimmelberg mountains a few kilometres due west of the N7 and the Olifants River Valley approximately halfway between Citrusdal and Clanwiliam. The pass has some very steep gradients of 1;5 but these only last for short distances and will not present many problems for normal cars. The road does have some very sharp corners though, where caution needs to be exercised. This is a connecting farm road with low traffic volumes and offers a sublime drive for the less hurried traveller who enjoys gravel road driving. Best time to visit is June through to October.

Getting there: We filmed this pass from east to west and describe it approaching from that direction. Should you be approaching from the north or east, invert these directions. From Piketberg on the N7 head north for 43 km via the Piekenierskloof Pass. At the summit turn left onto a tarred road at GPS S32.626730 E18.949314, heading north-west for a further 11 km. Take a right turn onto a gravel road at GPS S32.542807 E18.889259. Follow this road for 16 km as it heads in a generally northerly direction for 16 km. Turn right again at a Y-junction at GPS S32.419679 E18.866480. This point is the western start of the Diepkloof Pass. 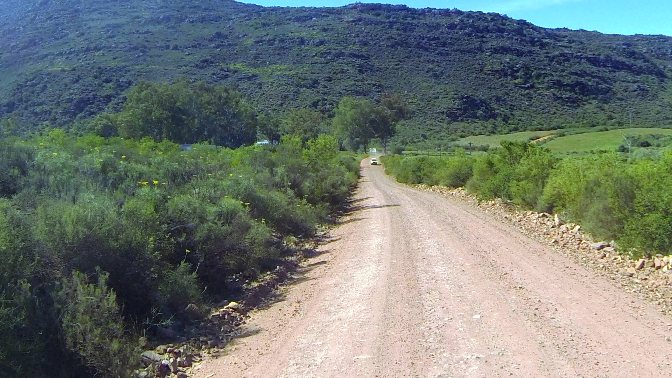 Approaching the Diepkloof farmstead / Photo: Trygve RobertsThe road follows the contours of a low mountain, called Skimmelberg, to the north via a wide S-bend and descends steadily at a fairly stiff gradient of 1:7. To the south are fields of crops belonging to the farm Diepkloof, which appears at the end of the S-bend on the northern side of the road at the 1,18 km mark. The pass is named after this farm.

The road changes direction more into the east after the farm and follows the contour of the much bigger Swartberg mountain (in no way connected with other Swartberg mountain in the Southern Cape). This next section of 1,3 km is mostly level, but there are several very sharp corners, of which two are dangerously blind. Be prepared for oncoming traffic and keep as far left as possible. Local farmers who use these gravel roads on a daily basis tend to drive fast. 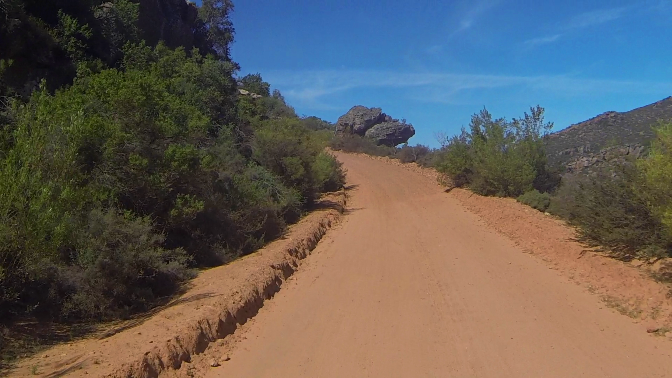 Look for the balancing rock at the 3 km mark / Photo: Trygve RobertsA short climb leads to a false summit of 478m ASL, which is followed by a very steep drop with a gradient of 1:5, which rapidly eases off to 1:30 as the road bends gently into the north via an easy 90 degree bend. A small river cuts through the kloof opening up on the right (east) which is called Grootkloof. This stream forms a confluence with the Haarwegskloof River a little further, which in turn forms a confluence with the Olifants River.

At the 3 km mark, there is a very sharp right hand bend of 100 degrees, as the road attempts to hold its altitude through a transverse ravine. Take this one at 20 kph.

After the sharp right hander, the road again follows the contour of the mountain on the left and begins the final climb at a gradient of 1:14 to the second false summit of 447m ASL, before descending at 1:20 through a lovely kloof towards the end of the pass. Ahead the road becomes tarred and this point also marks the end of the pass. The Haarwegskloof Pass also ends at this intersection at its northern end, so if you want to get back to the N7, take a right turn here and descend to the N7 via the Haarwegskloof Pass  which is a lovely, scenic drive of approximately 8 km. 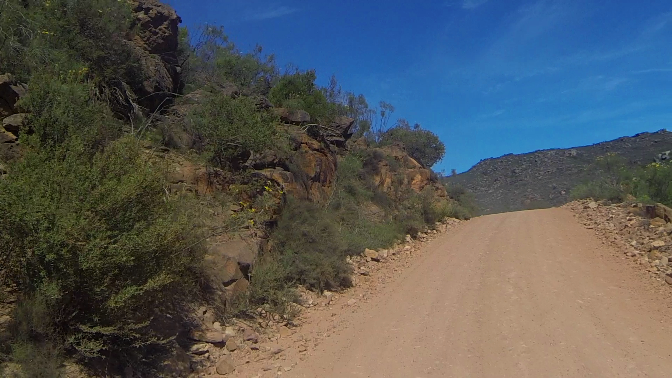 One of several sharp, blind corners on the pass / Photo: Trygve RobertsFor those wishing to continue north towards Clanwilliam via the back roads, continue straight on. The tar peters out and it's back to gravel road driving. Make sure you know where you're heading and where to turn as this region has many farm roads criss-crossing it. If you dont have a GPS, just keep turning right and you will end up descending via the Kransvleikloof Pass to rejoin the N7 at the Clanwilliam Dam about 25 km further north.

At the time of filming in September, 2015, the N7 was a congested and frustrating set of stop-go's as the wall of the Clanwilliam Dam is being raised to increase storage capacity. In the process a section of the N7 is being rebuilt at a higher level to allow for the higher water level. It is anticipated that this construction phase will last for several years, which makes the alternative back roads a very attractive option.

||Click to download: Diepkloof Pass (Note - This is a .kmz file which can be opened in Google earth and most GPS software systems)

Published in The Western Cape
Tagged under
More in this category: « Uitspankraal Pass (P2266) Januariesfontein Pass »
back to top