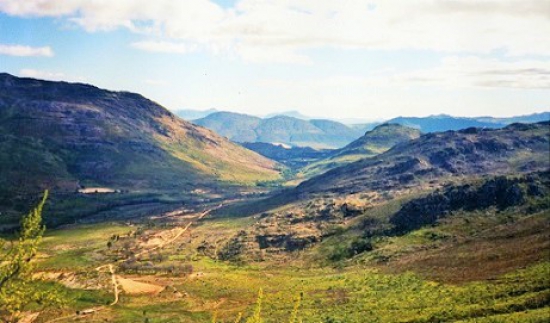 The Buffelshoek Pass should be viewed in conjunction with the Middelberg Pass as it is to all intents and purposes the southern half of the Middelberg Pass. The pass takes its name from the nearby Buffelshoek farming area and translates from Afrikaans into 'Buffalo Corner' undoubtedly relating to the presence of buffaloes here in the 1800's. The pass is gravel and generally maintained to a good standard. It offers fabulous views over the valley when driven from north to south (descending) - views that stretch back to the south as far as the eye can see in a blend of greenery and rugged mountains. It does sometimes snow on the pass, but during the summer months, it is hot and dry.

The pass compresses 30 bends, corners and curves into its 5,3 km length ranging from gentle curves to some extremely tight hairpins. Most of the steeper parts are in the upper reaches of the pass which also include most of the sharper corners, whilst the lower part of the pass through the farming area is much milder in terms of severity of bends and easier gradients. The pass is suitable for all cars, but be warned the surface can be rutted and rough at times, depending on when it was last maintained. We strongly recommend tyre deflation by at least 20% for any vehicle driving the pass.

Getting there: To approach from the north (as we have produced it), head east out of Citrusdal on the tarred R303 and ascend the Elandskloof Pass. The R303 becomes gravel 11 km after leaving Citrusdal. Almost immediately the much bigger Middelberg Pass must be ascended. The Buffelshoek pass and the Middelberg share the same summit point, so when you get to the end of the Middelberg Pass, you have arrived at the northern starting point of the Buffelshoek Pass. Please use the hyperlinks provided to get the exact directions to those two afore-mentioned passes. 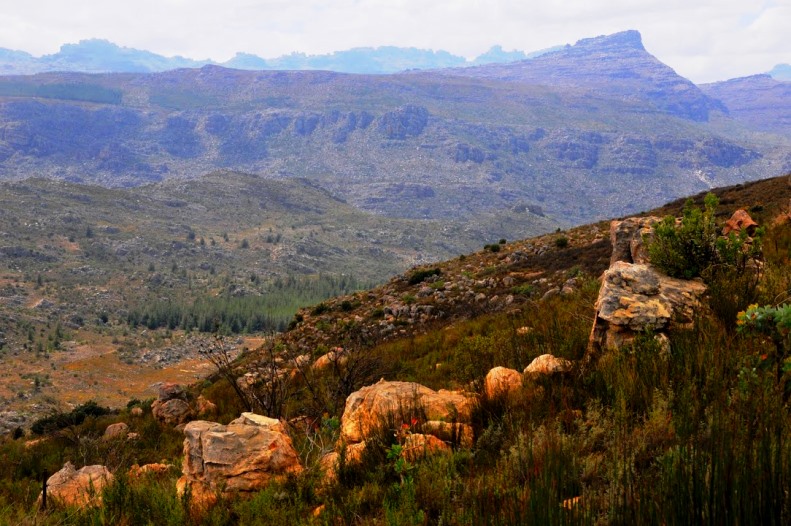 To approach from the south, travel north from Op die Berg for 46 km to arrive at the southern start of the pass. The southern approach to this pass are exceptionally attractive with towering mountains and crystal clear streams keeping watch over restful farms like Die Hoek and Kunje with the mountain known as Geelberg [1142m] forming the south-eastern portal of the kloof carved out by the Middeldeurrivier. The road then curls to the left around a 900m peak past the farms Bergsig and Ysterplaat, as a new tributary stream is followed - the Suurvleirivier. 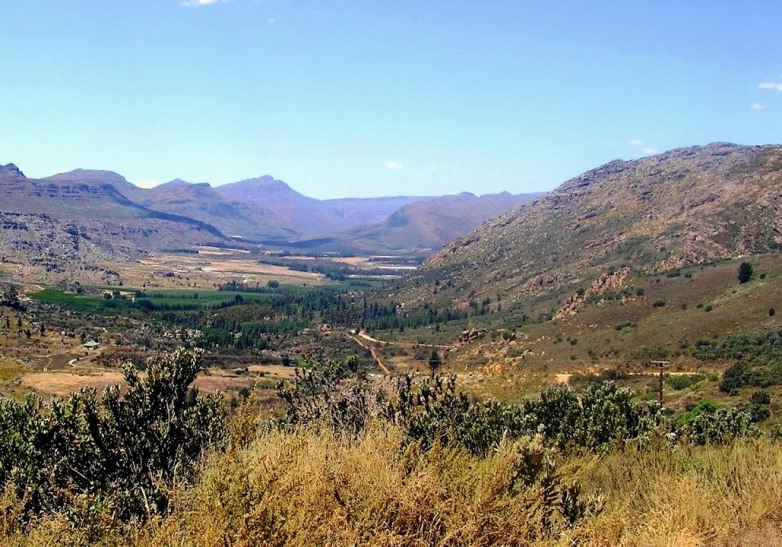 Pass Description: The northern start and summit point of the pass is marked by a small clearing right next to a large cluster of Cederberg sandstone formations. The views are wonderful from this spot, but a short walk into the north of 50m will reveal an even better view towards the north-west. Popular rest stops (like the summit of Buffelshoek Pass) are often subject to litter - a widespread problem throughout South Africa, where the responsible government authorities dont seem to understand the importance of regularly keeping these spots tidy.

There is a brown tourist board indicating that you are at the summit of the Middelberg Pass. This is also the summit of the Buffelshoek pass. It's easy to see why so many people get confused with the name of this pass. Most people call the entire pass the Middelberg Pass and very few refer to the southern section by its correct name (as indicated on the official government maps.) 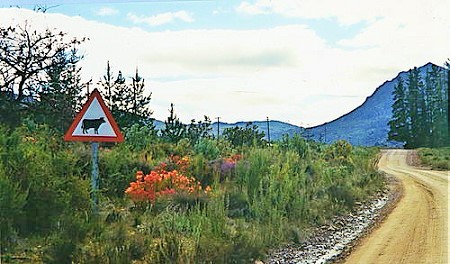 Pastoral scene near the foot of the pass / Photo: Panoramio

The road begins descending into the ESE at a gradient of 1:10 via three easy curves. These lead quickly into the first hairpin bend, which occurs 230m from the summit. This is the tightest of the hairpins, and it does require your full concentration and a reduction in speed to 30 kph. During the fruit harvesting season, there are often large trucks on this road, so be aware that they will require the entire width of the road to negotiate these hairpins. Hold back and allow them right of way as a courtesy to our farmers.

After the first hairpin, the heading changes completely and initially heads due west, but this changes gradually into the north as the road drops steadily down the eastern flank of the main ridge. The views along this section are wonderful and the elevation allows a perspective of the scope of the valley and surrounding farms.

At the 0,7 km mark, there is a wide right bend of 45 degrees, which leads into the second hairpin bend, which occurs at the 1 km mark. This is not a true hairpin, but more of a U-shaped bend, but it does turn through 160 degrees.

At the apex of this bend, a smaller road heads off into the north east - this road is marked Buffelshoek and leads to further outposts of the farm Buffelshoek. The entire pass traverses the head of the valley formed between the Middelberg and Grootberg mountains. 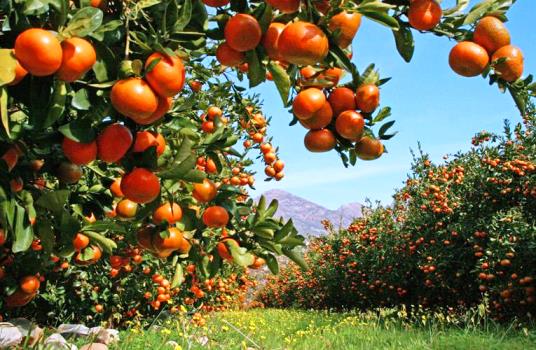 As the second hairpin is completed, the road settles down into its new heading of south-west and remains in that direction till the end of the pass. There are still many corners to negotiate so keep your speed moderate and more importantly as you approach the first cultivated fields and orchards, drop your speed to 30 kph in an effort to reduce dust on crops. Dust is a major contributor to poor quality crops. In this small way, each one of us driving these gravel roads purely for pleasure, can contribute to the well being of SA's agriculture. Make it a standard personal rule.

At several places along the lower half of the descent, smaller roads and jeep tracks lead off to the left (east). All of these lead to the Buffelshoek farms, outlying citrus orchards or Rooibos plantations. It is interesting to note that the Rooibos name has now been trademarked world-wide and no other country may sell similar products under that brand name in any overseas country. This is similar to champagne that may only be sold under that name, if it comes from the Champagne region in France.

The southern section ends adjacent the Tuinskloof farm as the road meanders towards the end of the valley through shady stands of pine trees. The farms in this valley produce primarily citrus fruit and there is some Rooibos grown in the northern reaches at higher altitudes.

||Click to download: Buffelshoek Pass (Note, this is a.kmz file which can be opened in Google Earth and most GPS software systems.)