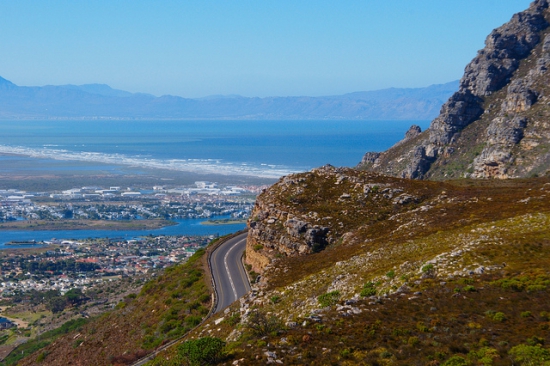 Despite the romantic, historical connotations of its name "Ou Kaapse Weg" ('Old Cape Road'), this is actually a relatively modern road, which was opened in 1968. There is a jeep track that runs more or less paralell, but higher up the northern side of the pass, which is purportedly an old wagon road road used to cart ore from the silver mine lower down the mountain in the late 1800's, and which is still accessible to hikers who walk the many beautiful routes available on both sides of the pass within the Silvermine Nature Reserve.

The pass is a major one covering a distance of 10,6 km and in that length contains 26 bends, curves and corners including 3 full horseshoe bends and another 3 corners in excess of 90 degrees. The pass offers a modern, well bult road with superb views over it's entire length of both False Bay and the Atlantic Ocean with the Steenberg Mountains and Silvermine Nature Reserve with its winter waterfall keeping travellers entertained through the middle section. It gives access to Fish Hoek, Noordhoek, Kommetjie, Simonstown and the Cape Point Nature Reserve.

Scroll down to view the map & video. It is recommended to watch this video in HD. (Click on the "quality" button on the lower taskbar of the video screen and select 720HD)

The pass starts on the outskirts of the village of Noordhoek (if you are travelling in a North-Easterly direction) and starts climbing immediately at a gradient of 1/18, but levels off for a brief period after two big sweeping 180 degree bends, past the intersection to Noordhoek Extension. The pass climbs again through many tight corners as it winds its way towards the summit, becoming steeper towards the last third of the ascent. Note that overtaking along this section is very difficult due to the almost continious barrier lines. 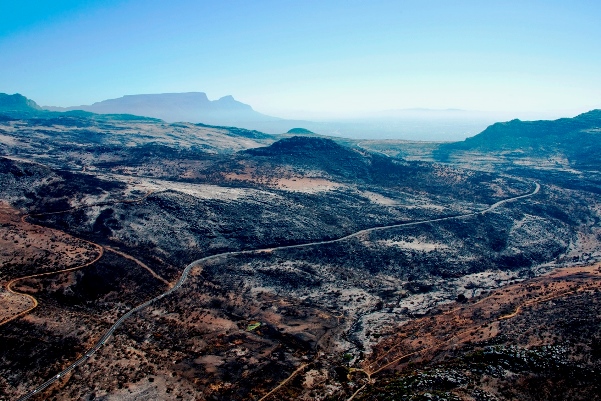 The western section of the pass after fires ravaged the mountain in the blistering summer of 2015/2016 / Photo: Jean TresfonThis is a very busy road on any day of the week and is the preferred route to the southern peninsula by locals over the very slow and congested coastal road via Muizenberg, Kalk Bay and FishHoek. The average speed will always be slow (60 kph) due to the many trucks, buses and slow vehicles that are inevitably plying this route. be patient and dont try any risky overtaking manouvres.

The summit is at 315m ASL providing a fabulous vista over the southern suburbs of Cape Town with False Bay on the right and the Back Table and Devils Peak in the background on the left, with the farming and equestrian areas of Constantia and Tokai directly below. Once over the crest of the world-class nature reserve of Silvermine, the road starts descending rapidly at a gradient of 1/15 via two large horseshoe bends to end at the T Junction at an altitude of 78m ASL. Watch out for cyclists and rockfalls. In 2012 Ou Kaapse Weg suffered severe traffic congestion because it was used as an alternative route to avoid construction work on Main Road between Muizenberg and Fish Hoek

The Silvermine Nature Reserve takes its name from the old mine and offers spectacular trails, picnic sites and mountain bike routes to the public. It falls within the jurisdiction of the Table Mountain National Park and is a beautiful place to visit at any time of the year, with winter providing the best conditions for walking. On the northern side of the reserve there are hikes offering views over the Atlantic ocean and walks that reach as far as Table Mountain including one that loops to the summit of Constantiaberg with its forest of communications antennae. 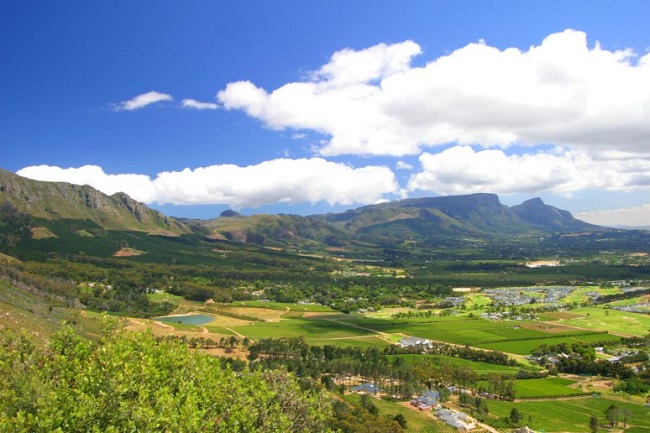 Looking north over Steenberg and Tokai / Photo: Road Travel FilesThe southern side offers slightly more gentle trails but there is a fabulous waterfall that provides a lovely view during winter. How marvellous for motorists to be able to drive daily along this beautiful pass right through a major nature reserve on their way to work every day. That is Cape Town!

The Noordhoek Valley is bounded in the north by Chapman’s Peak, Noordhoek Ridge and the sweep of mountains which make up the Steenberg Plateau towards Muizenberg, all of which form a magnificent natural amphitheatre. For many years Noordhoek was a fairly remote and inaccessible corner of the southern peninsula.

Until the Ou Kaapse Weg was completed in 1960s, the only access for nearly 300 years was via the main road that follows the railway line along the False Bay shore from Muizenberg via St James, Kalk Bay and Fish Hoek to Simon’s Town. It was not until 1923, that the scenic Chapman’s Peak Drive which links Hout Bay to Noordhoek was opened. There never was an original Ou Kaapse Weg. The name of the modern road is based purely on romance. The only way over the mountains was little more than a track from Kalk Bay to Hout Bay. Consequently, Noordhoek was for many years cut off from the main urban development of the southern peninsula. Since the Ou Kaapse Weg was completed, however, the valley has not been spared the ravages of urban blight which are in danger of destroying the very qualities that made Noordhoek attractive to start with: its rural landscape and natural beauty, which are now a mere 30 minutes from the heart of Cape Town.

Try these other scenic suburban passes in and around Cape Town:

||Click to download: Ou Kaapse Weg (Note that this is a .kmz file which can be opened in Google Earth and most GPS software systems)

Published in The Western Cape
Tagged under
Download attachments:
More in this category: « Blinkberg Pass (P1482) Akkedisberg Pass (R326) »
back to top