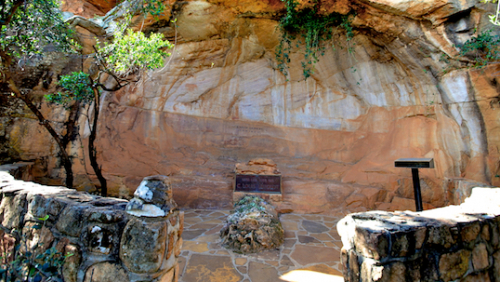 The Pakhuis Pass (meaning 'packing shed' in Afrikaans) begins just outside Clanwilliam, connecting it with the Karoo town of Calvinia and beyond. The pass's surveyor and builder, Thomas Bain, was an incredibly energetic man of many talents, which included art, rock paintings, geology, cartography and engineering. This is a major pass which has recently been fully tarred over its entire length and offers a wide variety of scenery, grave sites, weathered rock formations, picnic sites and some of the Cederberg's finest hiking trails.

The pass is suitable for all vehicles but do comply with the speed limits, especially along the northern switchback section, where the gradients are quite steep and the corners (although nicely radiused by the road builders), are quite sharp. The pass is in the Top 20 passes nationally in terms of its length (26,4 km)  and has a big altitude gain of 824m. Most of the new road follows Thomas Bain's original lines.

Getting there: To approach in the direction we have filmed it (east to west), simply drive north out of Clanwilliam on the R364. The pass starts at the crossing of the Jan Disselsrivier. 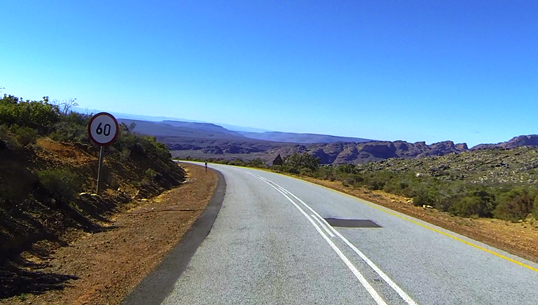 Summit view - note the speed limit / Photo: Trygve RobertsAt the time of building the Pakhuis Pass, Bain was busy with no less than four other passes in the Western Cape. The Cape has much to thank him for in how the region developed economically. The quality of his workmanship has truly stood the test of time, with many of his works being listed as national monuments. In 1877, Bain reconnoitered the route on horseback and created the start of what is a marvellously laid-out and constructed road across the unforgivingly rugged Cederberg Mountains that has only been tarred as recently as 2011/2012.

This double video set features the entire pass, starting just outside Clanwilliam and its popular dam, ending at the first farmhouse at the bottom of the Agter Pakhuis. Along the route there are several B&B and guest-farm establishments, ranging in style from rustic all the way through to 6-star international quality. Every visitor should spend at least one night in the Cederberg simply to wonder in awe at the endless galaxies spiralling out in the night-sky! There is plenty to do in the area for nature lovers; most notably excellent bird-watching and the famous explosion of wildflowers in springtime (August/September). Hiking and 4x4 trails abound! 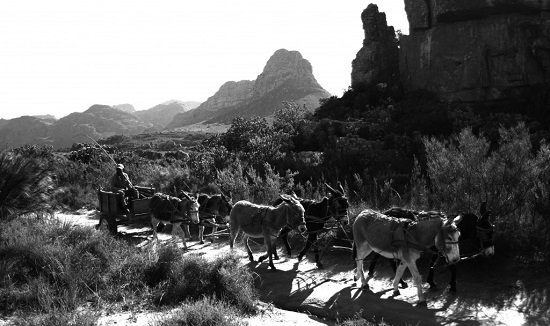 The traditional mode of transport in the Cederberg and still seen today / Photo: ArchivesHistory-lovers should stop at C. Louis Leipoldt's grave, which can be found approximately halfway along the route on the eastern side of the road. Johann GottliebLeipoldt, his grandfather, founded the tiny Moravian mission station of Wuppertal, which hosts South Africa's oldest working shoe factory: the home of the famous South African handsewn, leather 'vellies' ('veldskoene' translates as 'field shoes'.)

Before reaching the maximum altitude of 905m, look up and to the left where you will see the three serrated peaks of Charity, Hope & Faith. Continue on this road until you get to a turnoff, to the right, marked 'Wupperthal'. This low-quality gravel road will take you through the Biedouw Valley and eventually on to the Moravian hamlet of Wupperthal which is well worth a visit. You will get to travel another two passes featured on this website - Kouberg Pass and Hoek se Berg Pass. (links below)

There are a number of thoroughly enjoyable mountain passes in the Cederberg, all of which can be viewed on this website. These include the Kromrivier Pass, Uitkyk Pass, Nieuwoudts Pass, Pakhuis Pass, Hoek se Berg Pass, Kouberg Pass, Eselbank Pass, Grootrivier Pass, and  Blinkberg Pass.

One of the ten oldest towns in the Cape, Clanwilliam's beginnings go back to 1660 when a team of Dutch explorers who were sent out by Jan van Riebeeck first reached the Olifants River. When they entered the valley, the saw a large number of elephant on the riverbank. Jan Danckaert, the Dutch cadet in charge of the party, then named the river - Olifantsrivier. 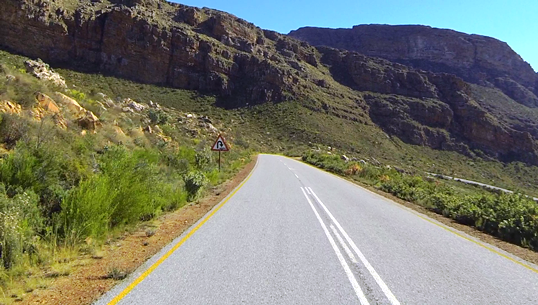 One of the four hairpins on the northern descent / Photo: Trygve Roberts

In 1732 the first farm in the Olifants River valley was awarded to Pieter van Zyl. The Town was originally known as Jan Disselsvlei , after Jan Dissel, a local pioneer and a botanist who lived in the Rhenosterbosch at Piquetbergen.

The area first formed part of the district of Stellenbosch, but was declared a sub-district of its own in 1808 by the Earl of Caledon, then Governor of the Cape.

On 1 January 1814, Caledon's successor, Sir John Cradock, renamed the area after his father-in-law, the Earl of Clanwilliam. It cannot be said with certainty when the town originated, but according to the available information it must have been between 1804 and 1808.

||Click to download: Pakhuis Pass (Note - This is a .kmz file which can be opened in Google Earth and most GPS software systems)

Published in The Western Cape
Tagged under
More in this category: « Kromrivier Pass, Cederberg Hoek se Berg Pass (P2262) »
back to top