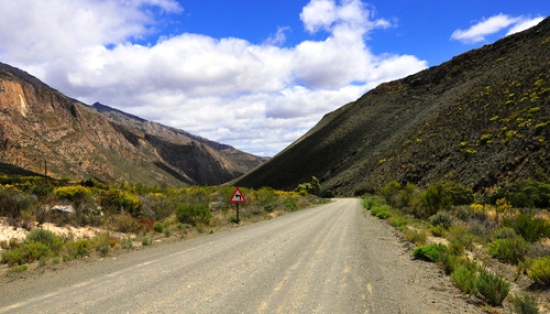 Near the summit of the Koueveld Pass - Photo: Pic courtesy Peter B Pearman/Panoramio

This well maintained gravel road pass lies on the northern side of the Swartberg Mountains close to the Seweweeks Poort. It connects the Seweweeks Poort area and farms eastwards and up to the Gamkapoort Dam with Laingsburg. The 6 km long pass is subject to winter snowfalls with a summit altitude of 1202m ASL and an altitude variance of 341m, producing an average gradient of 1:18, with the steepest parts being at 1:8. Two waterfalls on the Swartberg side of the pass makes this a great detour off the busier R62 route.

To locate the eastern start of this pass, simply drive  from Ladismith on the R62 by turning northwards onto the R323 through the awe-inspiring Seweweeks Poort. [Seven Weeks Poort]  At the northern exit there is a T-Junction. Don't turn right, unless you want to go on a very long and winding drive to the Gamka Poort Dam down the Bosluiskloof Pass. 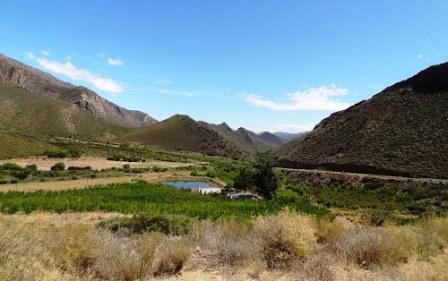 Turn left (west) and head for Laingsburg. After 8 km and after passing the Jannie le Roux Dam on your left, then the Rondefontein farm, you will arrive at the start (and summit) of the Koueveld Pass opposite a farm named Sandrivier at an altitude of 1202m ASL. Snow falls are not uncommon here in winter, hence the name of the pass. Translated it means 'Cold Fields'

The road starts descending at a gradient of 1:5. Around the first big left hand bend at the 1,4 km mark, you will see a lovely waterfall tumbling out of the Swartberg on your left side (assuming it has been raining of course!). The waterfall cascades down a sheer rockface which has been stained black over the years. This is the second of two waterfalls, called appropriately 'Swartval' [Black Falls]. A smaller waterfall is visible up the previous ravine, called 'Eersteval' [First Falls]. During the winter and spring season, these waterfalls are exceptionally attractive and make for great photographic opportunities, especially if you have a good zoom lens and a tripod. 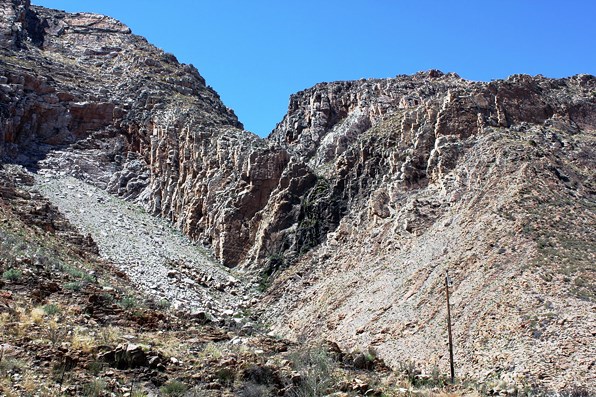 Rugged cliffs of the Swartberg / Photo: Trygve RobertsOn your right hand side opposite the waterfall is the 1207m high Horlosiekrans (Wrist-watch Cliff). The entire mountainside on the left hand side of the road is part of the Towerkop Nature Reserve. The road now descends via a wide right hand bend into the north-west. Directly below on the left is the Horlosiekrans farm (now renamed Moondance farm), surrounded by a network of green cultivated fields. The sharpest bend on the pass occurs at the 3,3 km as the road bends through a 90 degree left hand curve.

None of the corners on this pass are particularly sharp or dangerous and if you stick to the speed limit, there should be no problems in fair weather. In heavy rain or snow conditions, things would worsen rapidly.

The road descends quickly through a series of gentle bends, then dips through several farms nestling in the valley below. On the left hand side  an almost perfect heart-shaped rock formation can be seen in the mountainside. The first farm is Nietvoorby and before the second farm is reached, the road rises slightly through a small cutting, before descending to the Rietvlei farm. 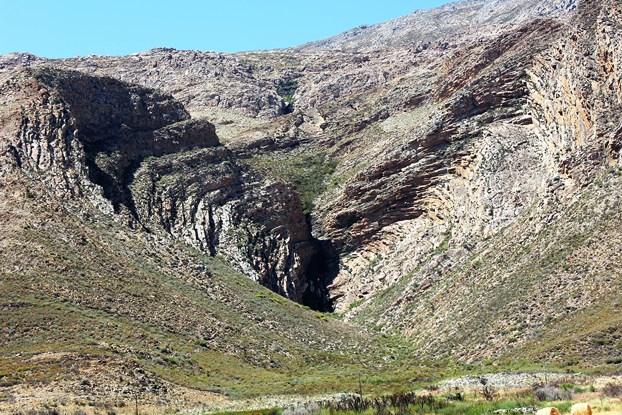 The unusual heart shaped formation on the southern side of the pass / Photo: Trygve Roberts

The pass ends at a triangulated intersection at the Rietvlei farm, before the road starts climbing through the next mountain range, when it becomes known as the Wittenek Pass.

At the Rietvlei farm intersection, if you're driving slowly, you might notice a cluster of ostrich sculptures, creatively manufactured out of old car parts as well as a large, flat stone with some bushmen paintings, but it's not known whether these are facsimiles or original.

The warm welcome that awaits tourists in Laingsburg, dates back to the mid-1700s. In those years farmers along the banks of the Buffels River offered hospitality to adventurers brave enough to cross the mountains and venture out onto the arid plains of the Great Karoo. In exchange for news of Cape Town and the civilised world, as well as gossip garnered from other farms along the way, these isolated farmers of the interior offered accommodation, sustenance and fodder. Many early officials and explorers, such as Barrow, Lichtenstein, De Mist and Swellengrebel, wrote of the people they met in what was later to become the district of Laingsburg. 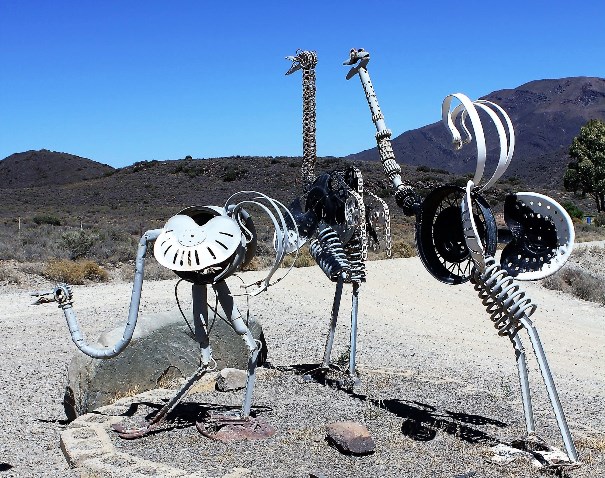 Art at the foot of the pass / Photo: Trygve Roberts

They described the Karoo as "awesome, hot, dry, and dusty. An inhospitable land peppered with friendly outspans, veritable jewels in the desert." At tiny homesteads dotted about on the vast plains travellers found fresh, drinking water, safe outspans, "a true welcome, homely hospitality and a nourishing meal." Many wrote that "such comforts were offered by God-fearing but brusque men, their shy women and hoards of children."

In 1862 Stephanus Greeff acquired the farm "Zoute Vlakte" (Salty Flats) . Today the town uses this farm as a source of water. Isolated graves near the old homestead record the passing of those who could travel no further. Among them was Margaret, the first wife of Henry Greene, who became civil commissioner at Colesberg. A devout woman, she became ill on one of the post coaches and had to stay over at Zoute Vlakte for medical attention, but she died. A black granite tombstone marks her grave. It states she died as she lived "secure in her faith in The Lord." The farm had shade and fresh, drinking water. 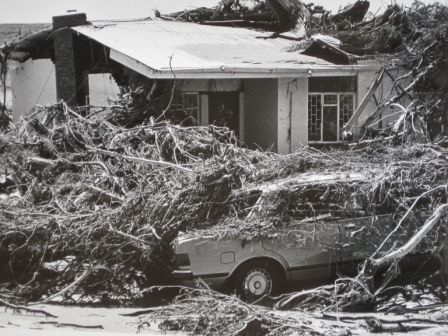 The devastation in 1981 in nearby Laingsburg / Photo: Archives

It soon developed into a popular stop. In 1879 Greeff acquired "Vischuil aan de Buffelsrivier" with the specific purpose of starting a settlement. At Greeff's request a portion of this farm was surveyed "for the establishment of a village". However, before this dream could become a reality a servitude being rerouted. Greeff appealed to John Laing, the commissioner for crown land and public works. He agreed to the rerouting.

For a short while the fledgling village bore the same name as the farm. Later, the settlement was called Buffels River and, when the rail came, the name changed to Nassau to avoid confusion with East London's Buffalo River. Then the name was changed to honour John Laing, whose decision to move a servitude made the creation of a town a reality. For a while the town was called Laings Town. However, in local parlance "town" was pronounced "toon" and, as that was the Afrikaans word for "toe" jokes began to mushroom. A quick change resulted in the village being called Laingsburg before any jokes stuck.

The first erven were sold on April l, 1880. Just over 100 years later, on January 25, 1981, Laingsburg was devastated by a flood. Within a few hours the whole town was under water and residents were fighting for their lives. It was a traumatic time during which 104 people lost their lives and only 21 houses were left standing. Highwater marks are indicated on lamp posts and in the Dutch Reformed Church, one of the few buildings that remained standing. Others were the railway station, Dutch Reformed church hall, the DRC Mission and the Lutheran Mission Churches, The Magistrates Court and Post Office, as well as a few private residences also survived. But almost all were badly damaged. Most tourists are astounded to learn how high the flood waters rose. Only the roofs of houses were visible. A video tape of the flood can be viewed at the library which also has a collection of photographs and press cuttings covering the devastation. The Voortrekker monument on the south side of the town was washed away. Later as all its blocks were recovered, it was rebuilt.

||Click to download: Koueveld Pass (Note - This is a .kmz file which can be opened in Google earth and most GPS software)

Published in The Western Cape
Tagged under
More in this category: « Theronsberg Pass (R46) Moodies Pass (R322) »
back to top