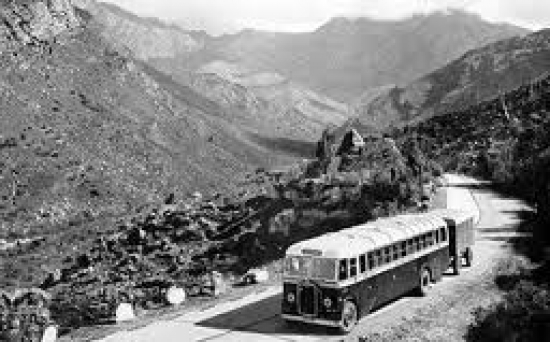 Michell's Pass (frequently misspelt as Mitchell's Pass) was named after Charles Michell who planned the original route through the Skurweberg & Witzenberg Mountains from Tulbagh and Wolseley through to Ceres. He was a talented military engineer, who perhaps gained more fame for his exploits by eloping with the 15 year old daughter of a French colonel. This might explain why he was "transferred" to the Cape of Good Hope! Michell went on to become the Surveyor-General for the Colony and designed and built several prominent Cape passes and bridges and was a major influence in road construction in the Cape, together with the popular Colonial Secretary, John Montagu, had the vision to plan a network of roads through the Cape Colony that would pave the way to a successful growth in the region's economy.


FULL-SCREEN MODE: Click PLAY, then pass your mouse over the bottom right corner of the video screen. The outline of a square will appear. Clicking on it will toggle Full Screen Mode. Press ESC to return to the original format.

Getting there: For travellers from the north, head south out of Ceres on the R46 where the pass starts. We filmed this pass from north to south to maximise on the scenery. For north-bound traffic, the southern start of the pass can be reached from Worcester on the R43, or Bains Kloof Pass (R301) or from the R44/R46 via the Nuwekloof Pass and Tulbagh.

The pass was deemed to have significant financial importance to the region as it opened up a decent trading route to the Warm & Koue Bokkeveld farming areas, cutting off some 150 kms of the alternative route to Ceres. It was completed in two years and built by Andrew Geddes Bain circa 1848. The pass was widened and concreted in 1938 just before WW2 (due to a shortage of asphalt), but closed in 1969 when an earthquake shook the area and caused serious rockfalls. It was given a complete revamp in the same year, utilising sections of the original Bain construction and drywall supports. These remains have been declared a national monument in 1998 and can still be seen today close to the Old Toll House. 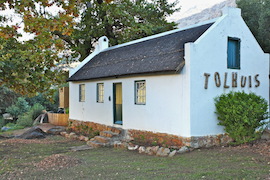 There is history on the pass at the Ou Tolhius as well as light refreshments / Photo: panoramioThe pass carries considerable traffic, but due to the excellent engineering of the last rebuild, the road is now much safer with double lanes in several places, allowing for safe overtaking of slow traffic. Add to that, the road also offers adequate width safety shoulders adding a further element of safety. There are however, still some surprisingly sharp corners and very steep gradients to contend with.

Starting just outside the own of Ceres, the road starts ascending rapidly via an S-bend. The summit is reached fairly quickly 800m after the start. It's recognizable by a cutting on both sides of the road.

The descent is fairly gradual initially at 1:70 as the road sweeps into a wide left hand curve. A substantial viewsite appears on the left where picnic facilities are available. This northernmost viewsite (one of at least 5 viewsites along the pass) offers the best views.

At this viewsite one gets a good view of the waterfall at the head of the Dwarsrivier, which can be breathtakingly dramatic in the rainy season. If you're lucky, you may catch an exciting glimpse of a kayaker shooting the falls. Just above the waterfall and to the west side, the railway line (now fallen into disuse) disappears into a tunnel. Note that all the viewsites except for the Ou Tolhuis are only accessible to descending (south-bound) traffic. 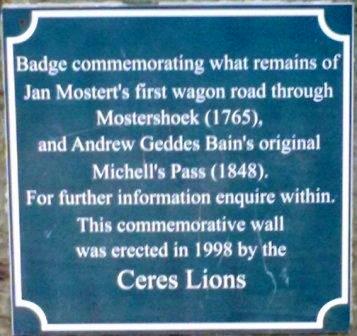 One of the commemorative plaques at Die Ou Tolhuis / WikimediaFrom the northern viewsite the road descends via several easy S-curves till the 1,8 km point, where the gradient increases steeply to 1:6. This is the first of two dangerous sections on the pass. There are ample warning signs advising drivers to slow down. Despite the much steeper gradient, the road swings through a very sharp S-curve at the point where the railway line crosses the road. The banking of the road alters briefly into negative, as the railway line is crossed and it is this short change in attitude that throws many drivers into making mistakes.  In almost all of the incidents at this crossing, the problems were caused by excessive speed.

After the rail crossing the road sweeps into a steep right hand bend and the Ou Tolhuis makes it's appearance on the right, tucked into a small ravine with it's own stream. Just after the old toll house, the gradient decreases to 1:14 as the road descends gently along western side of the rugged valley.

A fairly easy section follows with fewer bends, allowing one to take in the fabulous scenery. Ahead lie two dangerous corners, as the road mimics the shape of the mountain on the right. Once again, there is ample signage warning drivers about these bends.The first one is reached at the 5,6 km point and has a turn angle of 50 degrees, the gradient also steepens a lot here to 1:10. 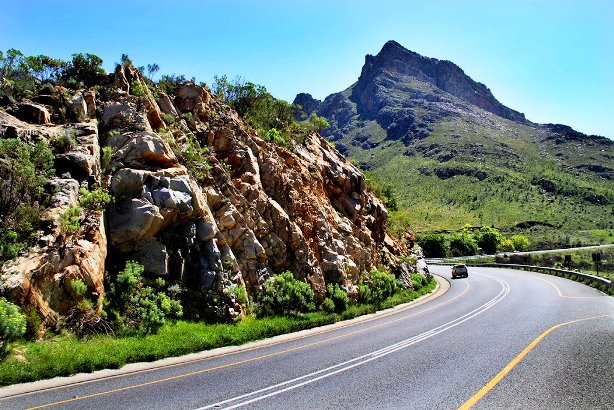 A fine mountain pass with fabulous scenery / Photo: Daan Prinsloo It is the next corner which is the real troublemaker on this road and has been the scene of several serious accidents. It occurs at the 6,4 km mark and it's very sharp as well as blind. Comply with the recommended speed and there will be no problems.

Once through this bend, the road bends through an easy left hand bend and ends at the intersection of the R46 and the R43 at the so-called 'White Bridge' at the 8,2 km mark. Turn left and cross the bridge if you're heading to Worcester or Bains Kloof Pass and continue straight on if you're heading to Tulbagh and the Nuwekloof Pass.

The scenery is wild and spectacular and during the winter months the surrounding peaks are frequently covered in snow. When the snow comes, so do the crowds. We offer some sage advice on snow spotting. Weekends are the worst time to go, as the roads can sometimes get grid-locked resulting in traffic backing up all the way to the bottom of the Michells Pass. If you can, rather visit during the week. If a weekend is your only option, then get out of the city by 7am and get to Ceres by 8.30 am or earlier. The best place to get into the snow, if you dont drive a 4WD vehicle, is at the Klondyke Cherry farm or Matroosberg. These farms can be accessed via the Swaarmoed Pass north of Ceres (available on this website). The Theronsberg Pass also gets plenty of snow, but access to the snow is a little more difficult. Try and get out of the area before 11.30 am to avoid the crush.

Watch a short video below of the lovely waterfall near the top of the pass, which many people are not aware of. It can be seen from the last two view-sites on the right hand side of the road on the ascent (heading north).

||Click to download: Michells Pass   (Note - This is a .kmz file which can be opened in Google earth and most GPS software systems)