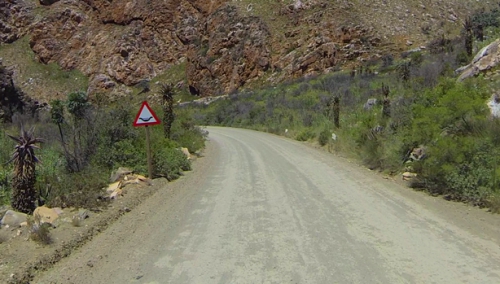 The Seweweeks Poort is probably the most beautiful 18 km stretch of gravel road anywhere in South Africa. With easy gradients, multiple river crossings, mind-boggling geology, camping and self catering accommodation all packed into an almost perfect micro-climate, this road is an absolute joy to drive or ride, as it twists and turns through every angle of the compass, as it follows the contorted bends of the river and falls entirely under the control of Cape Nature Conservation and more specifically the Swartberg and Towerkop Nature Reserves. It is also a certified Unesco World Heritage Site.

This poort is one of our Top 20 all time favourite roads. Add it to your bucket list!

Getting there: We filmed this poort from north to south. To approach from this direction, take the R323 from Laingsburg on the N1 for 68 km via the Rooinek, Witnekke and Koueveld passes to arrive at the northern starting point of the pass. Here there is a fork. The left hand option is a dead end and leads to Gamkaskloof Dam via the Bosluiskloof Pass. Take the right hand option into the Seweweeks Poort. 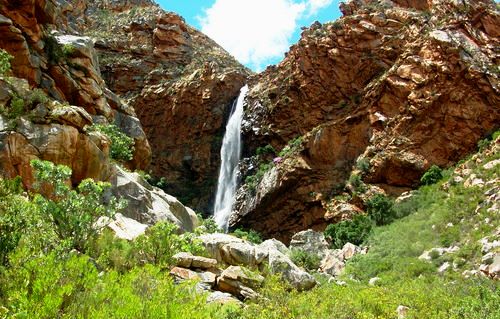 Waterfalls can be seen in the poort during the winter season / Photo: Ferdie Nel

For those wanting to approach from the south, turn north off the R62 between Ladismith and Calitzdorp near Zoar, at GPS S33.480541 E21.459414. Head north on this road for 4 km to arrive at the southern start of the poort at a low level concrete bridge.

From the northern start at the fork to the Bosluisluiskloof Pass, keep right and head south into the poort. If you have about 2 hours spare, you can take the road to the Gamkaskloof Dam via the old Bosluiskloof Pass, which was constructed around the same time as the Seweweekspoort by the same construction team, headed up Adam de Smidt,

The Gamkapoort Dam, was built by the Dept. of Water Affairs in 1960 for farmers in the Gamka River Valley near Calitzdorp. Once the dam was completed, it effectively cut off road access via the R407 to Prince Albert and a different routing had to be found.

The Swartberg Mountains tower over the road and for the first time visitor it seems impossible that a road exists through this massive jumble of contorted rock formations. 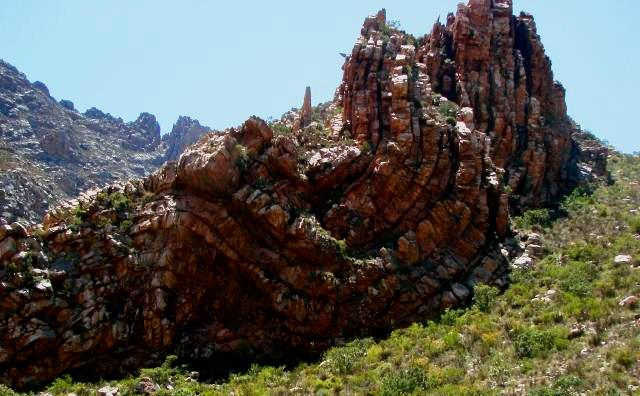 Poorts normally exhibit small altitude variances, but the this one has a height difference of 479m, which is more than many major passes in South Africa. Due to its long length of 17,7 km one hardly feels the gradient changing and for cyclists, the poort is a joy to ride from north to south.

Here you will experience rugged and wild scenery as the slopes and spurs of the mountains leave a narrow space just wide enough for the stream to find a passage, while precipices of naked and contorted rock tower overhead, blocking out the sun, like a natural bastion on either side.

The poort provides a considerable shortcut for travellers wanting to go to Ladismith or Calitzdorp from Laingsburg or Sutherland. The route is designated officially as the R323 but its official number is the P0903. The surface is gravel throughout which is generally maintained in a good condition. The road does suffer frequent damage after heavy rain. In the northern sector of the poort, most of the river crossings are simple concreted drifts, but as the river gets bigger towards the southern end, the crossings become more sophisticated as the drifts become fitted with underground pipes and later by actual small concrete bridges. None of these have guard rails, so make sure you drive conservatively.

Besides the exquisite Seweweeks Poort itself, you will also be able to enjoy the Rooinek Pass, Witnekke pass and the Koueveld Pass on the way from Laingsburg before you reach the poort - all of them are close to the Swartberg Nature Reserve or the Towerkop Nature Reserve. It is a beautiful drive (especially in winter and spring) with a vast variety of mountain scenery to enjoy.

There is an array of stories as to where the poort got it's name from, most of which are folklore. The most likely version is that it is named after the Seven Weeks Fern (Polystichum Andiantiforum), which in Afrikaans is called the Seweweeksvaring, which grows all over the poort in moist places and crevices. This is the officially accepted version.

Other more fanciful interpretations are that the poort was originally named after one of the Amalienstein missionaries - Dr Zerwick and that the locals could not quite pronouce his name correctly and it changed from Zerwick to Zeweweek over time. Research has proven that no Dr. Zerwick ever served at Amalienstein.

Another story is that it was said to take 7 weeks for the brandy smugglers to get their wares from Beaufort West to Ladismith via the poort. Yet another insists that it took 7 weeks for the authorities to capture a cattle rustler who had disappeared into the kloof. All of these stories conjure imagery of a bygone era and they all add to the magical allure of the poort. 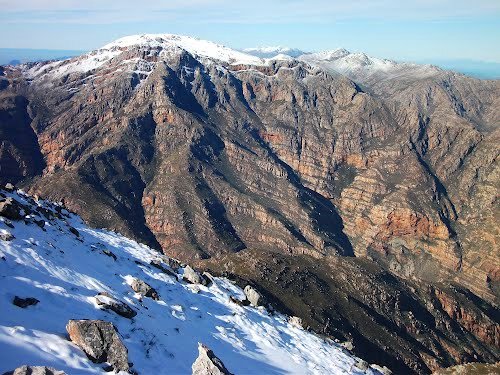 Seweweekspoort peak is the highest point in the Western Cape / Photo: Google Images

Throughout the length of the poort travellers are treated to the magnificent vertical and contorted rock strata, which reflect extreme volcanic eruptions millions of years ago when the Swartberg Mountains were formed. These rock formations are part of the Cape Fold Mountain system

The Aristata protea was rediscovered in the poort in the 1950's, after it was believed to have been extinct for quite some time. Other protea species found in the poort are Convexa, Eximia, Nitida and Sulphurea.

Bird and mammal life is also plentiful and the patient observer will be rewarded with sightings of Cape Pheasant, Stork, Egyptian Goose, Owl, Black and Fish Eagles and many more smaller varieties. Leopards still roam these mountains, but are rarely seen.

The main peak on the western side is called the Seweweekspoort Peak and has an altitude of 2325m which is more than 90 meters higher than the Matroosberg (2231,5m) near Ceres. Many sources incorrectly list Matroosberg as being the highest peak in the Western Cape. Now you know!

The locals on both sides of the Swartberg range had been agitating for some time for the construction of a road through the mountain range since 1845. John Montagu, the Colonial Secretary visited the area in 1849 and after various investigations it was decided to build the road through Meiringspoort, and later a second access road through the Seweweekspoort. 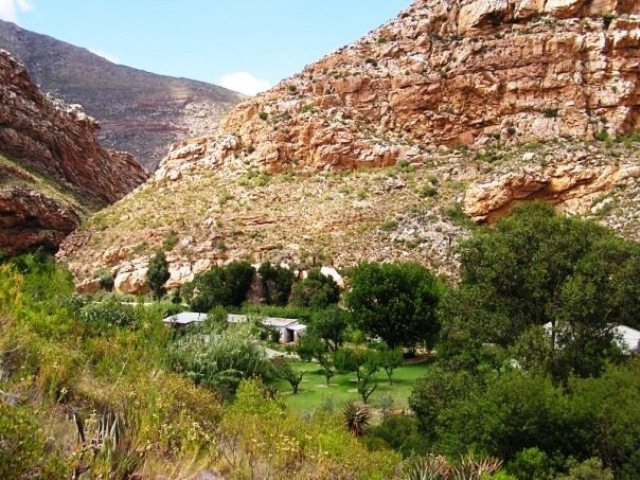 Meiringspoort was completed in 1858, after which attention was given to Seweweekspoort, which was already being used as an access route to and from the north, even though it took up to six days of hard travel to struggle through the poort.

During 1858, the authorities decided to build a proper road through the poort. The initial work was done by convict labour without an engineer being present, but progress was slow and in 1860 Adam de Smidt (brother in law of the renowned pass builder Thomas Bain) took over the project. De Smidt was a formidable pass builder himself, having been responsible for at least three of the seven passes on the old road between George and Knysna and numerous other passes. The hard work and quality of his engineering became buried under the accolades to his superior in the Roads Department, Thomas Bain. It is common knowledge that Bain and de Smidt had bitter arguments about the routing of one of the seven passes, which resulted in them spending the rest of their lives not speaking to one another. Those were two headstrong men!

Initially this poort was also a toll road and the ruins of the old toll house can still be seen near the northern entrance. A typical toll fee in the late 1800's was levied at one penny per wheel. Even that long ago, the public were moaning about how expensive the toll roads were! Afrikaans author and poet C.Louis Leipoldt called this poort one of the seven wonders of the old Cape Colony. The poort was completed and opened for wagon traffic in 1862. 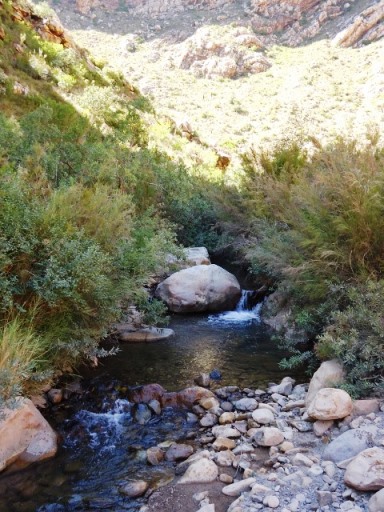 Take a cool dip in one of the rock pools / Photo: Archives

The last two kilometers of the poort cover a wide, open plain with the river meandering across it. The road soon crosses the stream via a low level concrete bridge, which is the second last river crossing and the first of only a few properly constructed bridges which have only recently been added.

The average gradient is actually an easy 1:35 and there is no point with a gradient worse than 1:20. This makes it an attractive option for mountain bikers, which is evident in the many endurance cycling events taking place in the area, not least of which is the well known Seweweekspoort Mountain Bike Challenge. Expect to see cyclists on the winding road on any day of the week. The pass starts at 1101m ASL and ends at 532m.

The pass ends near the old Amalienstein Mission station on the R62 between Ladismith and Calitzdorp, now known as Zoar.

Ladismith started as a permanent place of worship in 1885 and a portion of the farm Elands Vallei was bought for 1000 Pounds from a Mr. Kloppers. In 1852 this was laid out by William Hopley into 128 erven and named in honour of Lady Juana Smith, wife of the Governor Sir Harry Smith. The spelling was Ladismith with an ‘i’ to differentiate it from Ladysmith in Natal.

If you've never travelled through this poort, start planning your trip as this is one of the most rewarding scenic drives anywhere in South Africa.

||Click to download: Seweweeks Poort (Note - This is a .kmz file which can be opened in Google earth and most GPS software)

Published in The Western Cape
Tagged under
More in this category: « Roseberg Pass (R381) Steenbras Mountain Road, Gordons Bay. »
back to top