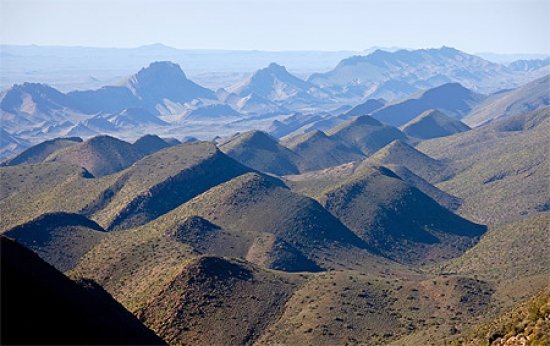 This is one of the most spectacular gravel passes in the Western Cape offering stunning scenery of craggy mountains, vertical rock walled poorts, old-school engineering, game spotting, birdlife and a fabulous 4 star lodge to ease weary travellers into the bushveld way of life. The pass has 60 bends, corners and curves compressed into its 7,6 km length with an average gradient of 1:13 which is remarkable considering that the lower part of the pass where it becomes a poort is fairly flat. Yet there is no point on the pass whichis excessively steep. There are some sections that reach 1:6 so this road with it's steep unguarded drop-offs requires focused attention by drivers.

This historic pass dates back to 1862 and was completed by Thomas Bain's brother in law - Adam de Smidt. The road is named after the many fossilised ticks found in the rocks when the road was built. This used to be the main road between Laingsburg and Prince Albert up till the late 1960's when the Dept. of Water Affairs built the Gamkakloof Dam, which had a number of consequences, including making this road obsolete.

Firstly it made the road a dead end as there was no way around the new dam and secondly it spelt the end of the farming community in the Gamkakloof, as the new road bulldozed eastwards through the Gamkaskloof gave this community access to Oudtshoorn and Calitzdorp. They left the kloof in a steady trickle until there was no-one left. That is one of the negative sides of progress. The full story on the on the Gamkaskloof can be read elsewhere on this website.

Scroll down to view the map & video. It is recommended to watch this video in HD. (Click on the "quality" button on the lower taskbar of the video screen and select 720HD.) Wait a few seconds for the video to open....

FULL-SCREEN MODE: Click PLAY, then pass your mouse over the bottom right corner of the video screen. The outline of a square will appear. Clicking on it will toggle Full Screen Mode. Press ESC to return to the original format.Scroll down to view the map & video. It is recommended to watch this video in HD. (Click on the "quality" button on the lower taskbar of the video screen and select 720HD.)

Getting there: There are two options. The first (and recommended) route is to take the R62 to Ladismith. About 25 km east of Ladismith there is a gravel road leading off to the north. This will take you through the amazing Seweweekspoort. At the northern end of the poort is a T-junction. Turn right (east) and follow the gravel road to the Bosluiskloof Pass and ultimately, the Gamkapoort Dam. Note that this is a dead end drive. You have to retrace your route back out the way you came in. 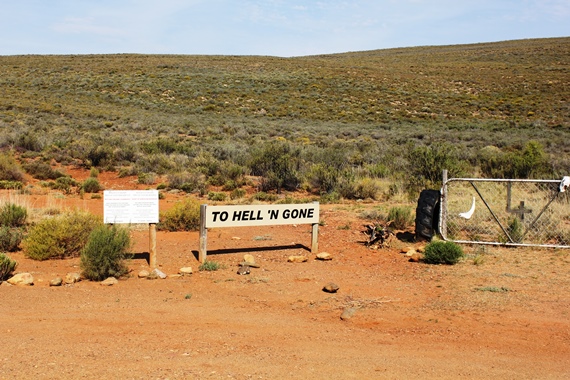 The hiking trails and 4x4 routes in the reserve have some interesting names / Photo: Trygve RobertsThe second option is to take the N1 to Laingsburg. In the middle of Laingsburg turn right (east) and take the R323 via the Rooinek, Witnekke and Koueveld passes. This road is tarred for part of the way and becomes gravel just before you get to the Koueveld Pass. Continue on the gravel road for 12 km until you reach the intersection to the Seweweekspoort (on the northern side). Continue straight on to the Bosluiskloof Pass. The first 4 km of gravel road is straightforward and it heads steadily up a long hill at an easy gradient. Slow down for a couple of cattle grids. After 4 km you will arrive at the closed gate of the reserve. Read the entry conditions and slide the gate open and close it again behind you.

History: Over the past 160 years until ±1970 different parts of the reserve were extensively used for stock farming. Currently it extends almost 14 000 hectares, but it was of still greater magnitude before the Gamkapoort Dam was built in 1967 – 1969 on the eastern side of the property. The Dam also cut off the former main road to Prince Albert. Although many different owners farmed with livestock until ±1970, only small scale herding has taken place since. The reserve thus had a period of natural rehabilitation of almost 40 years. The veld in some areas is untouched by grazing but other areas were not that fortunate. Since the building of the dam the veld had time to rest and rehabilitate causing it to improve every year. Much however, depends on the rainfall patterns. The reserve still has signs of old structures, used by stock-farmers in the past, which can still be visited. There are also a number of old graves from the middle 19th century. 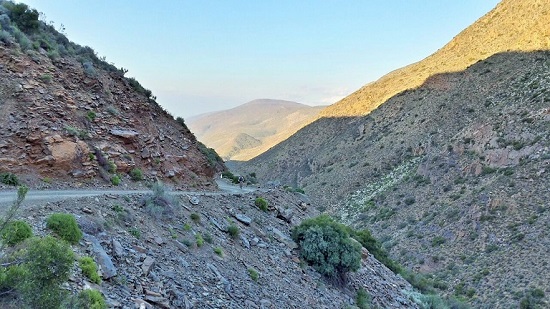 Mountain bikers can enjoy this pass with its low traffic volumes / Photo: Bosch Luys KloofThe road today is a cul de sac at the reserve's eastern end (at the Gamkapoort Dam). It was originally built as an ox wagon/horse trail and never really upgraded to much higher standards. It was the link to Prince Albert and Beaufort - now Beaufort West. An interesting piece of history is unfolding with the development of the "Wagon route to Beaufort", 4x4 route. Almost half of the trail follows a historic wagon/horse route to the inland/ hinterland of the old days and was in use in the early 1800's. It was in common use until about 1863 when the current pass was built, shortly after the road through Seweweekspoort was completed. The new much more accessible road obviously changed forever the lives of the many pioneer settlers and trekboere who were already occupying large areas of land.

It is also interesting to note that a whole century went past before a road was eventually built into the "Hell"/Gamkakloof in 1962, adding to the mystery of the people who preferred to stay in the remote kloof and who had to keep on traversing on foot and by donkey. One can assume that there was contact between the pioneers in Die Hel and those who lived at Bosch Luys Kloof. [Info courtesy www.boschluyskloof.co.za] 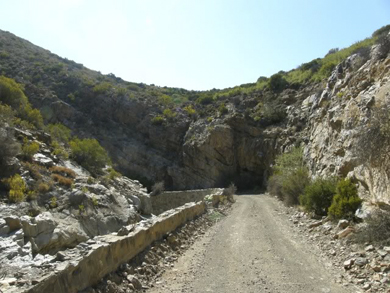 Both the river and road have to share this narrow turn through the kloof / Photo: WikipediaPass Description: The start (summit) of the pass is reached 3 km later near a sign (and gate on the right) that reads: "To hell 'n gone" This is a 4x4 only route and a permit is required.

Once you reach the summit you will be greeted by a very long and deep kloof. Endless ridges of mountains fade from brown to blue to gray as far as the eye can see. On a clear day the Gamkapoort dam can just be seen in the distance. These mountains are so many in number that no-one ever bothered going through the task of naming them, but the range to your right (south) is the Swartberg range and to the north the Elandsberge form a second corridor. The pass hugs the left hand side of the kloof for most of the descent. Keep your speed down as there are one or two sharp corners, and consider the real possibility of oncoming traffic and the amount of space you will need to get two vehicles past each other on this narrow road. In dry weather, this road is quite doable in a normal sedan vehicle, although some ground clearance would be a benefit. 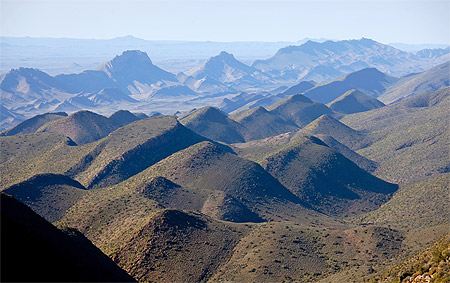 Aerial view of the kloof / Photo Bosch Luys KloofThere are several examples of Bain style dry-packed stone walling propping the road up as efficiently today as it did in 1863. It should be remembered that Thomas Bain and Adam de Schmidt, although brother-in-laws, were fiercely competitive between each other and De Smidt learned almost all his engineering skills from Bain. Thus all De Smidt's roads and passes that he constructed bore a remarkable resemblance to Bain's work. Both Bain and De Smidt worked for the Colonial Public Works Department, with Bain holding a more senior rank than De Smidt.

The terrain is rocky and rough as the descent continues in an endless series of gentle S-bends for some 7 km. Eventually the road crosses the river for the first time and here there are fine examples of old school engineering by De Smidt as he held the river back with excellent stone work, to make space for the road through the narrowest parts of the kloof. 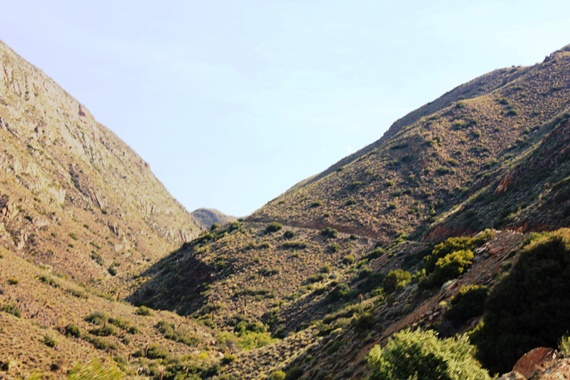 A comfortable gradient - looking westwards / Photo: Trygve RobertsThis is not a dangerous pass, providing speed is kept low. It should be noted that are very few safety barriers. It is also a long descent, so concentration levels need to be kept up. For the observant traveller a car wreck lies at the bottom of the ravine - a vivid reminder to drive carefully. Once your vehicle goes down there, it's for keeps. Ashes to ashes in every sense of the phrase.

The vegetation is peppered with succulents and acacia throrn trees. If you have metallic paint on your vehicle, drive carefully through these lower sections as there is a good possibility your car could get scratched. The road dips through a sharp S bend to the left and follows an almost vertical cliff face for a few hundred meters, then swings back into the east again for the last stretch to the guest lodge Bosch Luys Kloof.

They have attractive thatched self catering cottages, where you can enjoy all the reserve has to offer including hiking, 4x4-ing and mountain biking. The Gamkapoort dam is another 7 km further down the road.

The beauty of driving this road, is that you get to drive it in the opposite direction as well.

||Click to download: Bosluiskloof Pass (Note - This is a .kmz file which can be opened in Google earth and most GPS software systems)

Published in The Western Cape
Tagged under
More in this category: « Hemel en Aarde Pass (R320) Dasklip Pass »
back to top