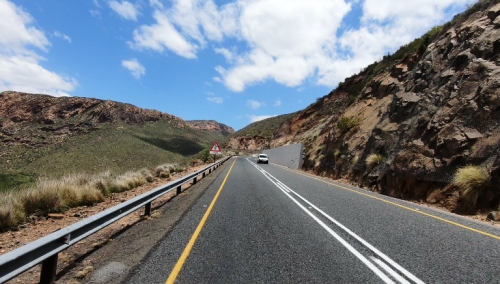 The 13,4 km long Huisrivier pass lies on the R62 between two valleys in the Little Karoo between the towns of Ladismith in the west and Calitzdorp in the east. It has 39 bends,corners and curves packed into that distance, which requires vigilant driving. Not only is this a fairly long pass, but it has many sharp corners, steep gradients and exceptionally attractive scenery. Many lovely rest areas have been provided by the road builders. The perfectly banked corners will be a joy to ride on a motorcycle.

This pass is unique in that its geology is unusually unstable and several pioneering engineering techniques had to be applied to successfully build a safe all-weather pass. The pass, which includes three river crossings, is not particularly steep, where the engineers have managed to limit the speepest gradients to a fairly comfortable 1:12. The pass is suitable for all vehicles with the only natural dangers being rockfalls, but the substantial catch walls appear to be taking care of that as well. The road carries heavy trucking traffic and overtaking is sometimes difficult. Patience is required if you get stuck behind a slow moving truck.

Getting there: We filmed this pass from east to west. To approach from this direction head west on the R62 from Calitzdorp for 5 km to arrive at the eastern starting point.

For those wanting to drive it from the opposite direction, head east from Ladismith for 30 km to arrive at the western start of the pass. 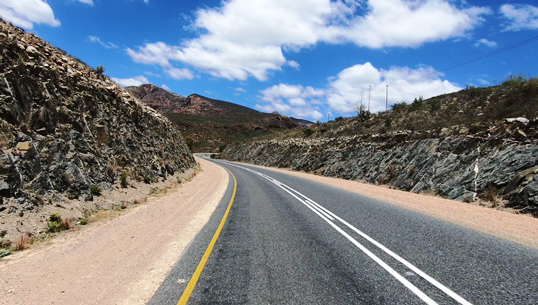 A double cuttings between the Gamka and Huisrivier bridges / Photo: Trygve Roberts

From the eastern start that road climbs steadily at a gradient of 1:16 directly towards a low neck, where the first false summit is reached at the 1,4 km mark at an altitude of 411m ASL. This is also where the first of many impressive cuttings begin. The rocks in these mountains are unstable and new engineering techniques had to be dveloped to limit the steepness of the slopes. The concave marks of the drills are clearly evident along most of these cuttings. The speed limit reduces to 80 kph at this point.

The road now descends via a set of double S-bends at a gradient of 1:14 as the first river crossing is approached. Along the right hand side there are three sets of heavy concrete catch walls (each about 3m in height), which prevent loose rocks from falling onto the road surface. Here the steep cuttings open up dramatically over the wide river basin of the Gamka River. 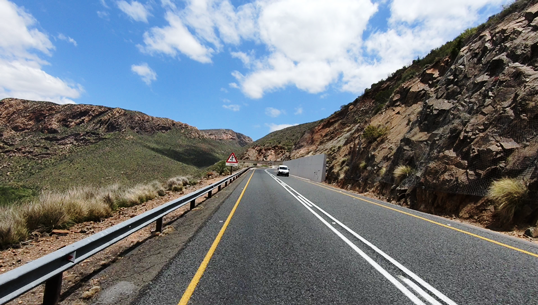 Catch nets and open concrete walls prevent rocks from falling onto the roadway / Photo: Trygve RobertsImmediately after the first bridge, the road sweeps through a left hand curve between another set of steep cuttings on both sides of the road in an effort to keep the roadway as flat as possible. As the bend straightens out, the next river crossing is reached, which is Marked as Huisrivier 1 (which is the first of two crossings of the smaller Huisrivier.)

The road swings back towards the right and remains almost flat as it follows the course of the Huisrivier for a few kilometres with only a few gentle bends. To the right there are several farms along the banks of the river, producung crops from the fertile flood plain of the river.

After a long straight, the road enters a gentle right hand initiated S-curve with a few small cuttings, then straightens out as it crosses the Huisrivier a second time (Huisrivier 2). Things get much more interesting after this third bridge at the 6,2 km point, as the road becomes hemmed in by the kloof and the gradient and frequency of corners escalates quickly.

The road bends sharply to the right through a 110 degrees and begins a 400m long climb into the north, before swinging back into the west for another long straight clim of 900m. Here overtaking becomes difficult as double barrier lines prevent (obedient) drivers from risking lives. There are two neat laybys along this section - one for each direction of traffic. The next set of bends winds in and out of a triple set of side ravines as the road works its way around a big right hand bend towards a side ravine and the only hairpin bend on the pass. 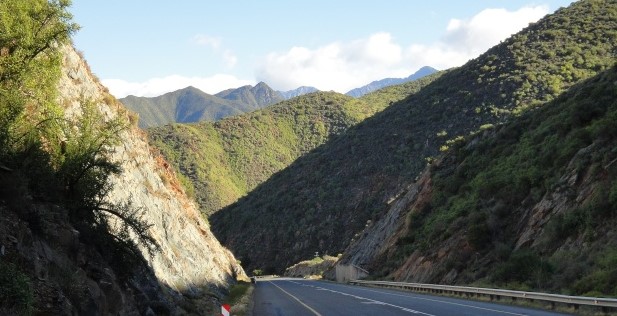 Steep cuttings and catch walls are evident in many sections / Photo: Africa4Adventure

Several more free standing concrete catch-walls are evident on the right, whilst a beauitiful view of the valley opens up on the left. Up ahead the road can be seen climbing steeply across the mountain slope at a higher level. You will need to slow down to 60 kph to safely negotiate the hairpin.

The late road builder/engineer, Dr. Graham Ross, was personally involved in surveying the route of the current pass as far back back as 1951. The original route through the mountains between the two towns (circa 1807) was through an adjacent poort to the south west called Caledon Kloof. It was the most direct route to Ladismith but the route followed the convoluted course of the river. 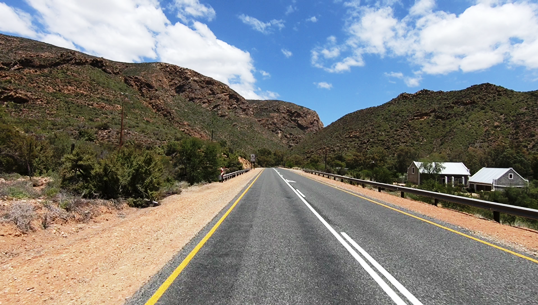 A neat farmstead in the middle of the pass / Photo: Trygve Roberts

It was a treacherous route with narrow, almost vertical sandstone cliffs. Over time the poort became littered with broken wagon wheels and oxen bones. It was given various names between 1810 and 1850 including Welgevonden Kloof, Rooielsbos Kloof and finally the most appropriate name of Verkeerde Kloof (Incorrect Kloof).

In 1810 it was renamed after the Governor, possibly in the hope of getting more funding. But in May 1885 a huge flood all but washed away the level river bed in the kloof and effectively put an end to all travels through the poort. The same flood completely decimated Meiringspoort further to the east and many other roads in the Cape. The Divisional Councils of Ladismith and Calitzdorp joined forces and built a new road adjacent to the Huisrivier, roughly following the course of the river. This was opened to the public in 1892.

The Huisrivier was not named after any specific house, but it is a Khoi word meaning 'willow tree'. The river originates in the northern regions of the Klein Swartberg and flows through the Seweweeks Poort, before joining the Gamka River, about two thirds of the way along the pass. The Gamka River in turn is a tributary of the Gouritz River which reaches the Indian Ocean to the west of Mossel Bay.

It took Graham Ross and his team almost 10 years to finalise the routing through the mountains and there was a lot of blasting and bulldozing necessary. The specific rock type in the mountain composition is easily disturbed and subject to frequent rockfalls, resulting in any cuttings invariably ending up with rocks in the road after the next rains. The construction work was dangerous and there are some harrowing tales of rocks as big as cars rolling down the mountainside, sending the construcion team running for their lives. 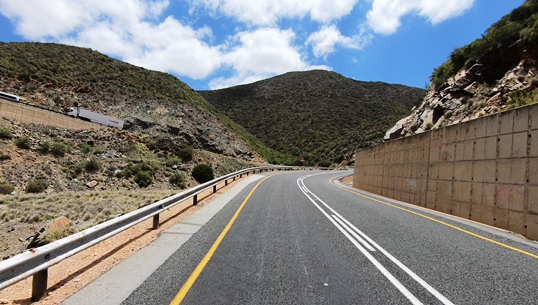 Approaching the hairpin from the east / Photo: Trygve Roberts

So extensive was the re-building of the new road, that an entire bypass had to be built allowing the flow of traffic to continue. This bypass can be clearly seen on the fly-over simulation at the beginning of the video clip. Drilling rigs had to be mounted on trailers and lowered down the slopes by cables with winches. The team soon discovered a new way to stabilize a rock face. After drilling they would pump water into the fissures at high pressure. This would loosen and lubricate the clay-like sediment between the rock layers and send tons of rocks and rubble roaring down the mountainside, which would then be bulldozed and used as fill for the road surface.

Once the rocks had fallen, the likelihood of new rock-falls was greatly reduced. To ensure that motorists would be safe from falling rocks, substantial partial retaining concrete walls were erected along the most unstable sections. These were left with an opening on the mountain side, so that any rocks would end up in the gap and not on the road. Maintenance teams could then keep these gaps clear on a normal routine maintenance system. The walls have certainly stood the test of time and when one drives over the pass, one gets the feeling that is has just been opened. The cuttings through some of the 'noses' and 'toes' (as they are referred to) are up to 60 ft in depth. This was truly an outstanding piece of road work.

There are many lovely lay-bys along the length of the pass to stop and enjoy the rugged scenery and admire the stellar engineering work. At the second lay-by the original road can still be seen on the left. This big pass is definitely one for your bucket list. The road is a living monument to the engineering skills of the late Dr. Graham Ross, an unselfish man who enthusiatically got involved with the Mountain Passes South Africa project, providing valuable engineering knowledge and guidance.

||Click to download: Huisrivier Pass (R62) (Note - This is a .kmz file which can be opened in Google earth and most GPS software systems)

Published in The Western Cape
Tagged under
More in this category: « Garcia's Pass (R323) Sir Lowry's Pass (N2) »
back to top