The Op de Tradouw Pass lies on the popular R62 route between Montagu and Barrydale - both towns which attract tourists by the droves and each has it's own special mystique and charm. This pass should not be confused with the Thomas Bain designed Tradouw Pass, which lies another 10 kms to the east and further to the south of Barrydale. The Wildehondskloofhoogte Pass runs back to back with this pass and together the two passes form one long pass of over 15 km. The Op de Tradouw Pass has an altitude variance of 300m with an average gradient of 1:18 with the steepest parts reaching 1:15. It provides beautiful views of the Tradouw Valley peppered with fruit  orchards and dams, with the Langeberg mountains in the background. The pass is modern, well engineered and safe, providing the speed limits and barrier lines are adhered to.

This pass and the Wildehondskloofhoogte pass should be viewed concurrently as one long pass. The Op de Tradouw Pass starts at the summit where the Wildehondskloofhoogte Pass ends. If you are travelling eastwards, the pass will present as a continuous descent of 5,3 kms. It starts at 728m ASL just after the Sanbona turn-off and ends at 431m at the crossing of a small river adjacent to a large farmstead. In the aerial simulated fly-over, the scars of the old road can still be clearly seen on the left hand side of the road, following a more convoluted route down the mountain. 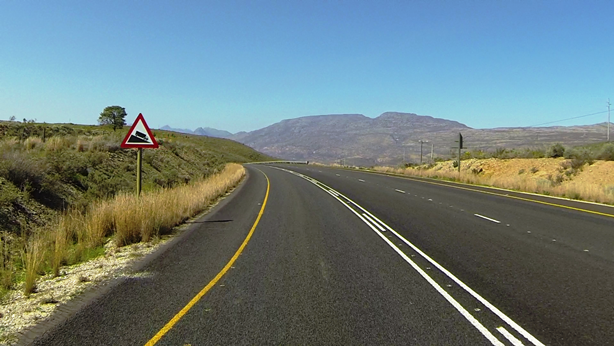 Near the summit looking east / Photo: Trygve RobertsThe pass starts at an altitude of 728m ASL and descends to 432m ASL producing an average gradient of 1:18. There are ten bends, corners and curves, a couple of which are quite sharp.

Look carefully at some of the cuttings and how the engineers have stabilized the rock face. The pass has safety barriers and ample width emergency lanes on both sides. The shallow slopes of the cuttings are a good indicator of unstable rock and soil along this pass.

Views all the way down are panoramic, with a patchwork of green quilted farmlands and the mighty Langeberg mountains as an imposing backdrop.

After the pass ends it's another 15 km before you will arrive in the town of Barrydale. Along the way, keep a look-out for the bizarrely named "Road-Kill Cafe".  The odd names of some of the establishments along Route 62 include Ronnie's Sex Shop (a country pub to the east of Barrydale) and Angie's G-Spot ( a a riverside pub at De Vlugt on the Prince Alfred's Pass. 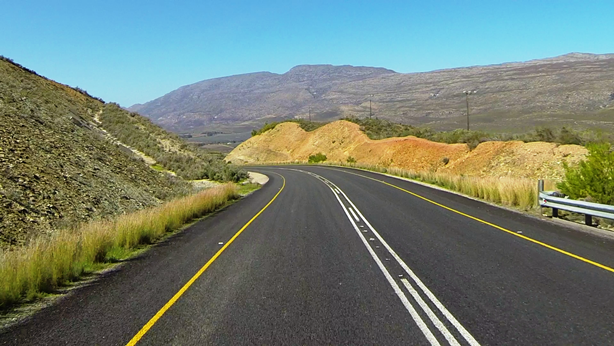 Note the shallow angle of the cuttings indicating unstable rocks & soil / Photo: Trygve RobertsThere is plenty to do in both Montagu and Barrydale. Both of these towns have become popular weekend destinations by city dwellers seeking some adventure, peace and quiet. There is a vast array of eateries and accommodation options available.

Barrydale officially gained municipal status in 1921 and has a population of approximately 3500 inhabitants. There is a fertile valley lying between the coastal belt and the Karoo, enclosed by the Langeberg and Swartberg mountain ranges. To call this region the Little Karoo is a misnomer . Geographically, geologically and scenically it is not part of the Karoo but supports unique features of it’s own that ensure its place as a very special part of South Africa.

The region was referred to as Kannaland on a map produced in 1843, this name being derived from the genus, Kanna. This area has a higher rainfall than the Karoo, which gave rise to permanent populations of Quena or Hottentot people of the Attaqua tribe in the low lying floor of the valley and to the Bushmen / Khoisan, who inhabited the mountains. 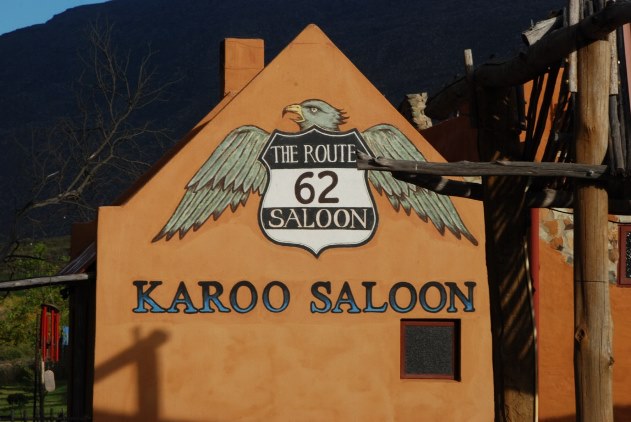 One of the many eateries in and around Barrydale / Photo: World Travel Files

The Attaqua had a path, parts of which are still visible today, through the Langeberg, which followed the deep, and steep, ravine known as the Tradouw Poort. Tradouw is a Hottentot word meaning “the women’s poort or footpath”. The Attaqua had kraals on “the other side” of the mountains, round the village now known as Suurbraak, known by them as Xairu, meaning beautiful.

Early visitors were Isaac Schrijver and his party, who were sent to this area in 1689 by Simon van der Stel and Lady Anne Barnard, who travelled in the Overberg and Little Karoo in 1798.

If you have never explored Route 62, take a few days and soak up all the wonderful attractions and wonderful mountain passes, which include Cogmanskloof, Wildehondskloofhoogte Pass, op de Tradouw Pass, Huisrivier Pass and of course a detour through the awesome Seweweekspoort is a must!

||Click to download: Op de Tradouw Pass (Note - This is a .kmz file which can be opened in Google Earth and most GPS software systems)

Published in The Western Cape
Tagged under
More in this category: « Wildehondskloofhoogte (R62) Prince Alfred's Pass (P0059/R339) »
back to top