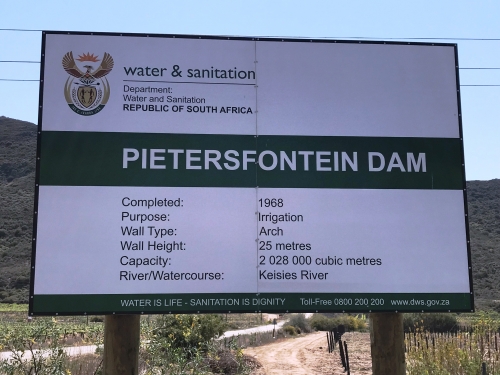 Sign at the start of the pass - Photo: Trygve Roberts

This is an unusual pass in many respects. It has no less than four false summits and displays an altitude variance of 273m over just under 10 km. Although the average gradient is a mild 1:36, there are some sections that are very steep at 1:5. It's located just north-west of Montagu to the north of the famous Koo Valley.

The pass is named after the old and historic Pietersfontein farm which lies at the end of the pass on the north-western side. On offer is a lovely drive through deep kloofs, juxtaposed with wide and sunny valleys smothered in fruit orchards and through all of this a small river provides life giving water to this small farming community.

The other odd feature of this pass is that it has very few bends, but watch out for loose gravel as well as slow moving farm vehicles and livestock on the road. If you drive a 4WD vehicle, it is possible to drive a complete loop and return to your starting point via the Patatsfontein Pass.

Getting there: This pass can only be approached from south to north as it is to all intents and purposes a dead end road. Head north out of Montagu on Bath Street, which becomes the R318. Remain on this road for 13 km and turn right (NNE) onto a gravel road at GPS S33.710872 E20.058647 marked as Pietersfontein. This intersection marks the start of the Pietersfontein Pass. 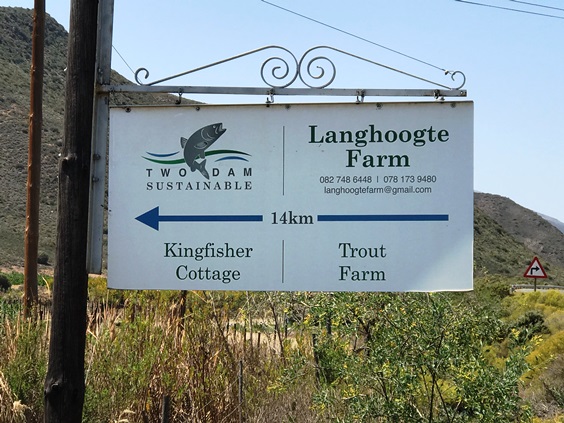 A quiet country road to hideaway for a weekend / Photo: Trygve Roberts

From the start the road heads straight towards a small bridge which straddles the Keisierivier. Ahead is a long range of peaks and ridges which run along the NW/SE axis. This is the Keisieberg which forms the watershed between the two rivers (Keisierivier and Pietersfonteinrivier). The range gets increasingly bigger towards the north-west, where one of the highest points is clearly visible, called Tafelkop [927m].

The road can be seen ahead, bending away towards the right as it follows a natural poort through this range, to allow access into the next valley. This climb is short and steep where the first false summit of 395m is reached at the 1 km mark. The gradients up this first climb are as steep as 1:8, but the road is wide and the surface generally well maintained, so there shouldn't be any traction issues in fair weather. The climb consists of a double S-curve but the radii are easy. Watch out for vehicles approaching from the opposite direction, which might encroach onto the wrong side of the road. 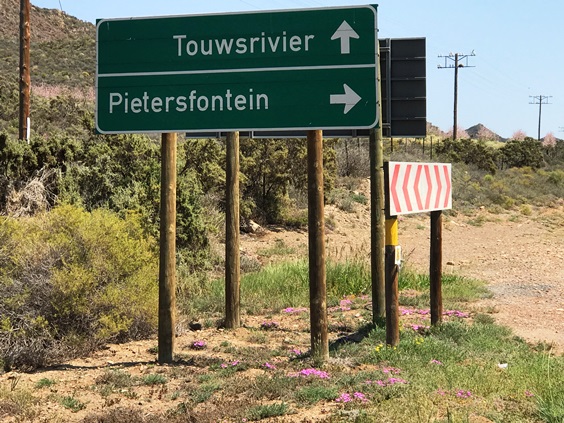 Look for this sign on R318 and turn right / Photo: Trygve Roberts

A lovely view presents itself from the first summit over the Pietersfontein valley as the road begins descending via a double apex left hand bend. Fruit orchards and vineyards appear on  both sides of the road and we urge all drivers to lower speed to 30 kph in an effort to reduce dust. This is especially important during the summer months, when dust causes a lot of damage to the farmer's crops. Make this part of your driving ettiquette and in this small way, each one of us can contribute to healthy produce.

The road ahead can be seen for some distance as a farmstead appears on the left. There is a minor bend to the right, whereafter the road crosses the Pietersfonteinrivier via low level concrete bridge. After 200m a cluster of buildings appear on the left. This is marked on the official maps as Middelvoetpad. There is a fork here. The left hand hand option leads to the Pietersfontein Dam and is a dead end, but if you're not in a hurry and have some time to spare, you can drive the 7 km to the dam wall. Allow 30 minutes for the extra distance and add for time at the dam. 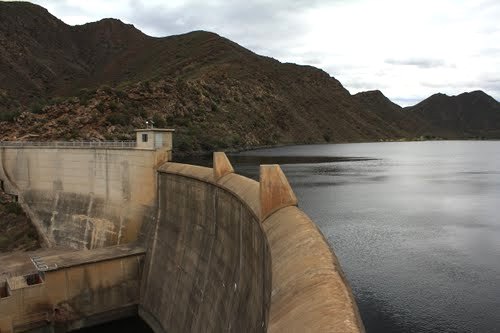 The Pietersfontein Dam was built in 1968 and has an arched concrete wall with a height of 25m. The dam has a capacity of 2,028m  cu.m. The dam is in a particularly attractive setting, flanked by tall mountains to the north and south. The drive to the dam follows fruit orchards and vineyards all the way. Once again, please drive at 30 kph (in dry conditions) in an effort to reduce dust.

Just after the dam intersection, (remember to take the right hand option if you want to skip the excursion to the dam) the road climbs briefly, then drops as quickly onto a small plateau, where the road can be seen running straight ahead for several kilometres. This part of the route is easy with gently undulating sections and it gives drivers and passengers a chance to soak up the peaceful country scenery, before the meaty part of the pass begins. 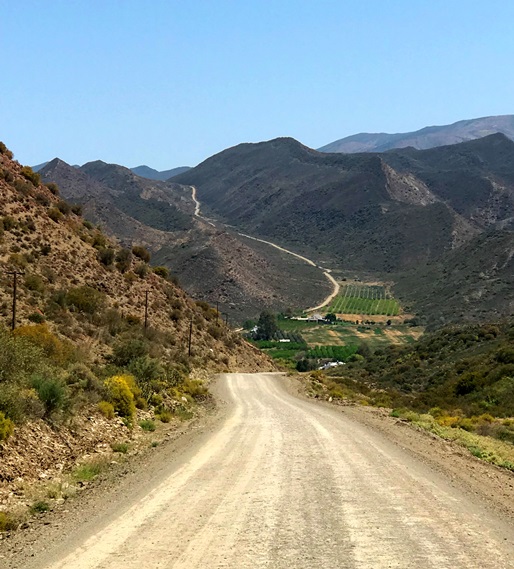 The climb gradient is deceptive as it's actually a lot steeper than what it first appears and smaller engined vehicles might well find themselves gearing down to 2nd and even 1st gear in some places. The scenery is wild and rugged with steep cuttings and roick faces hemming the road into a fairly narrow part of the mountain. This climb is also deceptive as there are three false summits along the climb. They occur at the 5,2, 5,8 and 6,4 km points. This must be a heartbreaking climb for cyclists!

After the third false summit, the road reaches a small neck, then descends briefly onto a plateau section, which is undulating. The final climb is once again steep, and the true summit is reached at the 7,9 km mark. The road curves gently to the left and a steep descent roadsign warns of what is up ahead.

As the main summit is crested, a big view opens up into the next valley, which is like a giant painting as it reveals itself from top to bottom. Pull over and enjoy the view. Far ahead an oasis of greenery marks the Pietersfontein farmstead and another road can be seen far ahead winding it's way up the next neck. This is the road that leads to the Doornkloof farm and is a dead-end.

The Pietersfontein farm has an interesting history. A book written by Mr. JFD Kriel reveals a fascinating historical record of farm life in the valley. Two coloured men Klaas Voogds and Jan Pieters delivered a load of ivory to the governor of the Cape. In return for the ivory each was allowed to slect a farm in the colony. Klaas Voogds is a well known name by modern standards and his friend Jan Pieters found  a farm with strong fresh water spring, which was promptly named Pietersfontein. This dates back to 1756. From then a number of owners have lived on the farm and include several generations of the same families. If you're into history the museum at Montagu has a 154 page book avilable on this farm

Once you have reached the end of the pass at the crossing of the Pietersfonteinrivier, you have the choice of retracing your route back to the R318 the way you arrived or (if you have a 4x4) you can return via the Patatsfontein Pass. You require permission to drive this latter route.

||Click to download: Pietersfontein Pass (Note - This is a .kmz file which can be opened in Google earth and most GPS software systems)

Published in The Western Cape
Tagged under
More in this category: « Langhoogte (R305) Doornkloof Pass (P1392) »
back to top