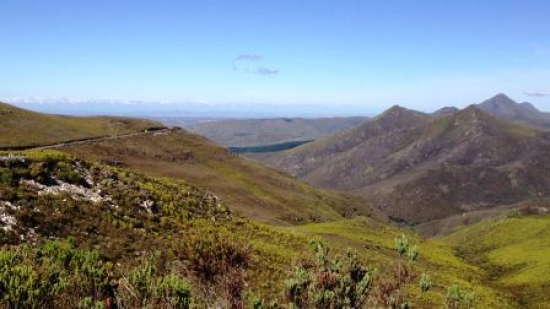 The Robinson Pass on the R328 route, is a modern classic of the Southern Cape with beautiful sweeping curves and superb views around every corner. It's administrative number is TR 33-2.  It connects the coastal port of Mossel Bay with Oudtshoorn. The pass has been rebuilt several times over the past 140 years and offers not only fabulous scenery, but many pages of history around every bend. The pass is subject to heavy rain and frequent mountain mists, which reduces visibility and makes the pass dangerous. It has claimed many lives over the years including a bus full of international tourists. A memorial stone in their memory stands on the left hand side of the road about halfway up the pass.

FULL-SCREEN MODEMODE: click PLAY, then pass your mouse over the bottom right corner of the video screen. The outline of a square will appear. Clicking on it will toggle Full Screen Mode. Press ESC to return to the original format.

The first pass over the Outeniqua Mountains was of course, the Montagu Pass (featured else where on this site), but the residents of Mossel Bay found this a rather tedious and long round trip. They wanted a pass with a more direct link to Oudtshoorn. Several attempts were made along the old Ruytersbosch Road, but they failed dismally. The local government sent Thomas Bain to do the job.

He had just completed Prince Alfred's Pass north of Knysna and used parts of both the Ruytersbosch Road as well as the Attekwaskloof Road, to build a feasible road over the mountains. It was opened in 1869 and then rebuilt and re-routed between 1958 and 1963 making it a much kinder pass to travel, but in the process losing some of it's dramatic charm and allure. The new pass was named after the Commissioner of Roads in the Cape at that time, Mr. M.C.Robinson. 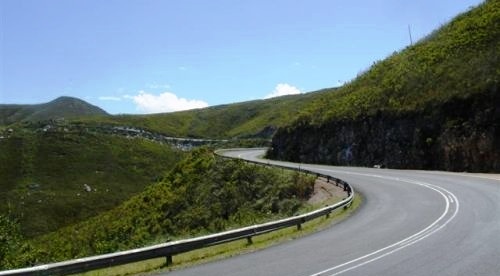 Sweeping curves on the Robinson Pass between Mossel Bay and Oudtshoorn / Photo: Tracks4AfricaIf you like hiking, there is a six hour trail called the Koumashoek circuit, which starts at the summit (the path is clearly visible on the video clip below). You need to be fairly fit to tackle this path. Permits are available at the Eight Bells Mountain Inn.

The pass was filmed travelling in a northerly direction (ascending) and starts at the well known Eight Bells Mountain Inn. The road climbs evenly for a few kilometers, then turns right into a long horseshoe bend. At the top end of this long curve is a small area to pull over. There are two memorials erected there - One for a Dutch lady who lost her life on this spot in a bus accident and the taller memorial is for a group of South African policemen who also died there. The views are peaceful and the fynbos seems to stretch away forever. The road continues to climb steadily but not too steeply as it reaches to craggy rock-faces near the summit. The road is in good condition but is frequently shrouded in mist or falls within the cloud base. The upper reaches of the pass are frequently wet and therefore dangerous. Speed limits vary between 40 and 80 kph.  It is suitable for all vehicles. 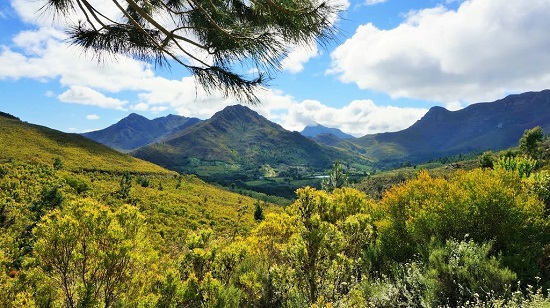 Views north towards the summit from the lower view site / Photo: Wolfgang Henko There are several safe lay-bys to stop safely and enjoy the amazing views over the mountain chains and coastal plateau. If you are fortunate enough to drive the pass after (or even during) rain, you will see a lot of water tumbling out of the mountain about 500 meters before the summit. We filmed this waterlogged rock-face during our first attempt at filming the pass, but the rest of the footage had to be discarded. We have included a short clip showing the small waterfall two days after the rain, followed by the waterfall in full spate. Once over the summit, the road descends at an easy gradient through a series of S bends as the road gradually levels off along farmlands alongside the river.

The northern descent starts at the 867m high summit point and ends 9 km later having descended 358 vertical metres, producing an average descent gradient of 1:25. The steepest parts of the descent are at 1:11 which is a maximum gradient engineers aim to keep things at on modern roads. 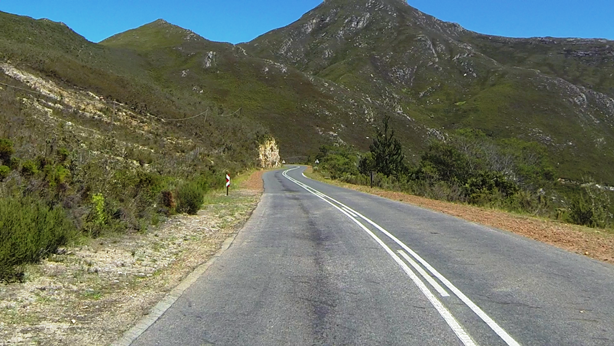 The northern descent also offers a lovely, scenic drive / Photo: Trygve RobertsThe northern descent is often overshadowed by the more dramatic southern section, but although the northern section of the pass does not have the same views as the southern side, it is nonetheless beautiful and worth enjoying to the full. A well farmed but narrow valley lies far below its green orchards in stark contrast to the more barren landscape typical of the Little Karoo. The descent has a total of 16 corners, bends and curves of which four are in excess of ninety degrees and two are semi-hairpins.

From the summit, the road heads into the north-east via a gentle right hand curve for 400m, where the first sharp corner is reached. A tall red and white telecoms tower can be seen on the right. This bend is a semi-hairpin, curling through 135 degrees, but is has postive banking which makes it safer. 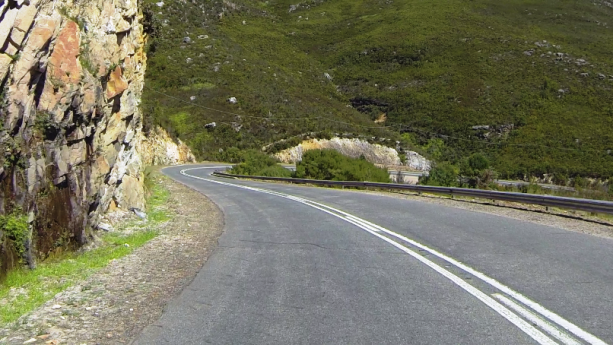 Some sharp corners to contend with / Photo: Trygve RobertsOnce through this bend, the road straightens out and a beautiful vista of mountains come into view, where the road can be seen snaking its way through some cuttings and bending away at a steady descent gradient to the right. Watch your speed here, as some of these corners are deceptively sharp.

The Robinson Pass is the favoured route for heavy commercial vehicles heading for Mossel Bay from Oudtshoorn and it’s a given that you will encounter several slow-moving trucks. Don’t take chances overtaking when barrier lines indicate
it’s not permissible to do so. A moment of indiscretion or impatience can end your life – and the lives of others too. Rather sit back and enjoy the natural beauty surrounding yourself.

At the 14 km point, the direction changes from north-east to north as the road follows the course of the valley. Soon the gradient eases off to a much easier 1:35 as several farms are traversed, including the well-known Sonop farm, which is the end point of the Attakwaskloof Pass.

For most this will feel like the end of the pass, but it continues descending gently for another 5 km and officially ends at the crossing of the Moerasrivier (Marsh River) at the 20,2 km point at an altitude of 509m ASL. Continue on the R328 for a further 30 km via the Brakpoort pass to arrive at a T-junction with the R62, where you can turn right to Oudtshoorn (2 km) or left to Calitzdorp (50 km)

||Click to download: Robinson Pass (Note - This is a .kmz file which can be opened in Google earth and most GPS software systems)

Published in The Western Cape
Tagged under
More in this category: « Outeniqua Pass - N9 Ruigtevlei Pass - Garden Route »
back to top