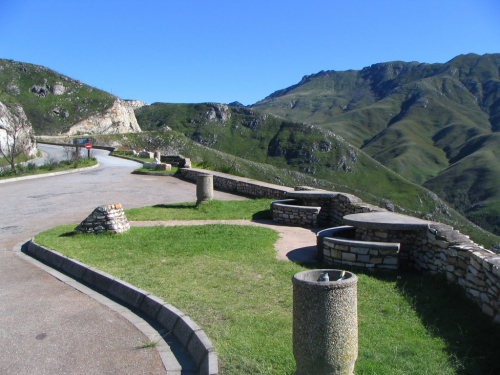 The Outeniqua Pass is a relatively modern pass, connecting the coastal town of George with Oudtshoorn and the Little Karoo. It was first built in 1942 - 1951 to provide an alternative to the narrow and steep Montagu Pass. It has been widened and modernized several times since then and today carries the bulk of the traffic flow between the two towns and the Langkloof. Rockfalls and trucking accidents close the pass from time to time. The higher reaches of the pass are subject to heavy rainfall and dense mountain mists which can reduce visibility to a few metres. Under such conditions, this pass is dangerous especially due to the volume of commercial traffic that it carries.

It contains 40 bends,corners and curves, many of which exceed 90 degrees. The road is well engineered, but it is advisable to stick to the speed limits have which have been carefully calculated to get you safely over the pass. For south-bound traffic there are several excellent view-sites and the third one from the summit is particularly impressive, which is marked as "The 4 passes". From this vantage point all four passes still be seen, one of which dates back almost 200 years.

The pass has an altitude variance of 581m and is long at 13,3 km, producing an average gradient of 1:23 with the steepest sections being at 1:10.

FULL-SCREEN MODEMODE: click PLAY, then pass your mouse over the bottom right corner of the video screen. The outline of a square will appear. Clicking on it will toggle Full Screen Mode. Press ESC to return to the original format.

Getting there: To approach from the north (in the direction which we filmed it), head south from either the N9 or the N12 (Oudtshoorn or Uniondale respectively) via the little known Beveraaskloof Pass, (which precedes it) to arrive at the northern starting point of the pass adjacent to a large packing shed on the left.

For those wanting to approach from the south, head north-west out of George on the C.J.Langenhoven Road (N9/N12) to arrive at the southern start at the bridge crossing of the Malgas River. 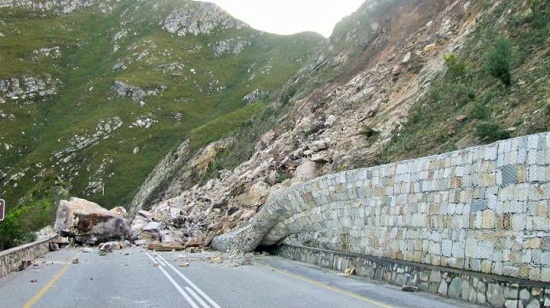 Rockfalls cause massive damage to roads and put motorists lives in grave danger. In wet weather always be aware of this possibility / Photo: WikipediaThe pass was filmed travelling in a southerly direction and starts at the end of the last farm on the northern ascent from the fertile valley immediately to the north of the pass, where most of the South African hops production is grown. The pass ascends in a series of sweeping S bends and reaches the summit after two kilometers via a deep cutting through a nose of solid bedrock. In late winter the hillsides are smothered in blooming proteas.

Just before the summit, there is a narrow concrete road heading off towards the left (east). This leads to a radio tower and it's worth pausing there to take in the expansive views of the coastal plateau far below, whilst being surrounded by several peaks of the Outeniqua mountain range. It is often cloudy, misty or windy at this spot and there are much better view-sites a little further on.

The road is in good condition but is frequently shrouded in mist or falls above the cloud base. The upper reaches of the pass are frequently wet and sometimes dangerous. Obey the speed limits (60 to 100ph) and there should be no issues. The road descends in lovely sweeping curves providing beautiful views all the way down. Look on the high side as there are almost always several small waterfalls cascading down the mountainside. 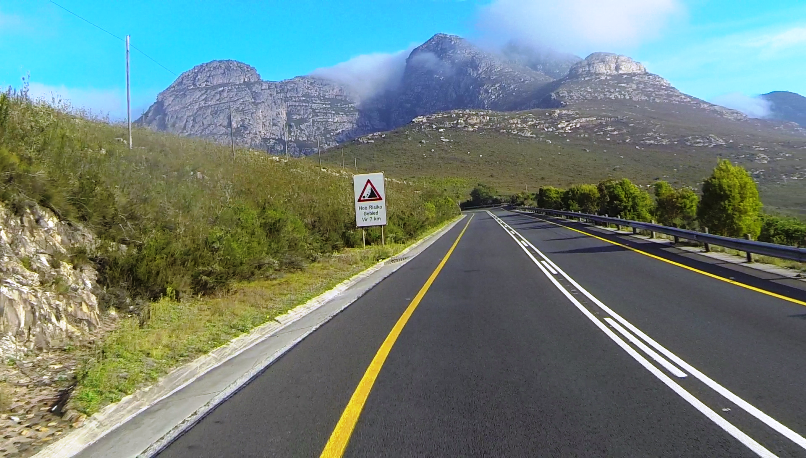 Approaching the summit from the northern side / Photo: Trygve RobertsThere are several rest stops/ view sites, but the third one from the top, which is marked as "4 Passes", provides magnificent views over the entire mountainside and coastal zone. The 4 passes are marked with a bronze plaque (recently stolen) depicting the names, dates and brief history of each pass. The first is listed as the Voortrekker Pass and became officially known as the Cradock Pass.  Careful observation will reveal a series of white beacons on the mountain opposite and to the east of the Montagu Pass.

The beacons lead up the hill and disappear up and over a neck. This very steep route provided a shortcut for many years to the farming area on the northern flank of the mountains known as the Langkloof. This was authorised and built by the local George landdros (magistrate), A.G. Van Kervel, between 1812 and 1847, but the route was murderous on tarvellers, wagons and oxen, with gradients of 1:4 and stone steps in places up to four feet high. Rarely would a wagon make it over the pass without a breakdown and a staggering time frame of three days was needed to cross the pass making use of a double span of oxen.

Massive views from the Outeniqua Pass where four passes can be seen from this point / Photo: Trygve RobertsThe Montagu Pass (featured elsewhere on this website) was built in 1847 and one gets a clear view of the pass from this vantage point, whilst the Railway Pass was built in 1913 which saw beautiful steam locomotives plying the rail link between George and Oudtshoorn for many years. The gradient of the railway pass is by  necessity gentle as it follows the approximation of the contours all the way down to the George railway station. THere is an electric caboose - known as the Outeniqua Power Van, which takes tourists from George station up the pass as far as the Topping station where the railway line overpasses the Montagu Pass. It stops there for a refreshment/photo break, then returns the same way. This is a novel way to view the various passes and fabulous scenery without having the distraction of having to drive. Bookings can be made at the railway station in George - or contact George Tourism. 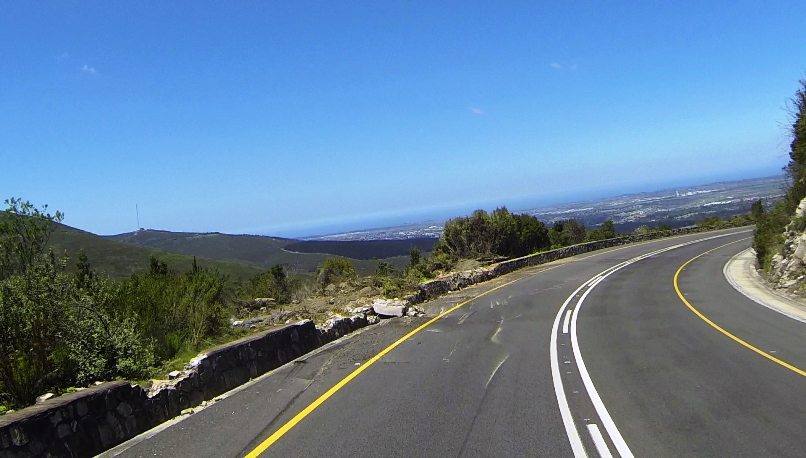 Signs of excessive speed or brake failure / Photo: Trygve RobertsThe fourth and final pass is the newest - the Outeniqua Pass, which was built utilising labour from Italian prisoners of war between 1943 and 1951 and later local labour was utilised after 1945 when the Italians were repatriated.

There are about four picnic areas/rest stops - all are immaculately clean. The speed limit is generally 70 kph. The road is in excellent condition and is frequented by a lot of heavy commercial trucks. It is suitable for all vehicles, but exercise extreme caution in misty weather when visibility can be reduced to a few metres. Fast moving cars and slow moving trucks are mortal enemies and most of the accidents are caused by these speed differentials, as well as by brake failure and excessive speed. Add impatience and alcohol into the mix and you have a lethal concoction. Drive defensively on these busy main route passes.

It's tempting to drive faster over the final 3 kilometres, at the point where the road opens up into four lanes, but stick to the speed limit, as there are still some steep gradients and sharp corners to deal with. One of the access roads from the Montagu Pass connects with the Outeniqua Pass at the 11,2 km point and if you want to drive the old Montagu Pass, turn left at this point.

The road keeps descending steeply towards the Malgas River valley via a series of bends. Be aware of slow moving trucks here and make a mental note that the double lanes reduce to single lanes towards the end of the pass, where overtaking becomes dangerous. The pass ends at the 13,3 km mark at the bridge crossing of the Malgas River at an altitude of 219m ASL. Continue for a further 5 km to reach George.

||Click to download: Outeniqua Pass (Note - This is a .kmz file which can be opened in Google earth and most GPS software systems)