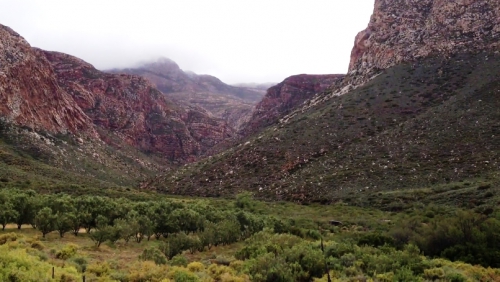 Swartberg mountains at the foot of the Kredouw Pass - Photo: Trygve Roberts

The R407 is a tar road in reasonably good condition, but has no safety shoulders. At the foot of the Kredouw Pass lies the beautiful Kredouw Olive Farm currently owned by Ian and Louisa Punt-Fouche, making this a popular destination and stop-over point for travellers. The Prince Albert Valley has its own micro-climate which is well suited for the production of olives, fruit, grapes, and nuts. 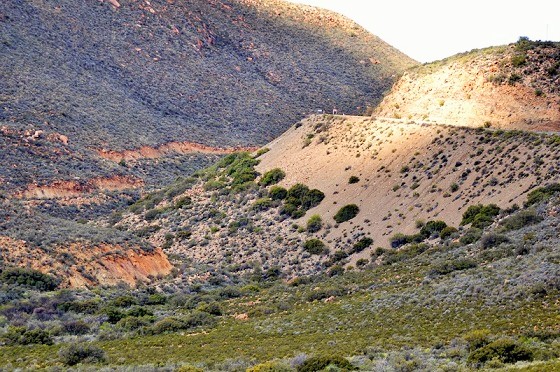 The old pass (left) and the new pass (right) highlight the advances in engineering and construction / Photo: Deon van der WesthuizenThe new tar road makes this traverse a simple matter, as in just a few minutes you are over the summit and descending down to Klaarstroom, but a careful look down into the valley on your left (north) reveals the scars on the mountainside left by the old pass, which followed a far more tortuous route down the valley. There are some fine examples of the original stone retaining walls still clearly visible.

It takes about 10 minutes to drive the pass. Often passes start and end points are difficult to isolate, but in general we use a river to river low point as a guide in the absence of official marker boards. The real gutsy part of the pass is from the start on the western side to the summit.

The original gravel pass is still clearly visible on the north side of the valley, and it becomes obvious how well designed the new pass is, in terms of design, gradient and comfort of driving. 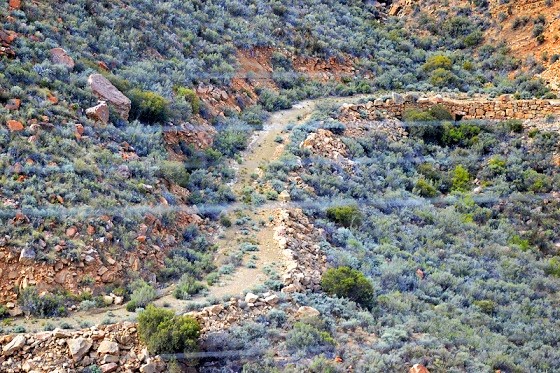 The old pass is slowly being reclaimed by nature. Note the dry-pack stone walling over the ravine. The grey stripes diagonally are power lines / Photo: Deon van der Westhuizen.Kredouw Olive Estate is a small attractive farm lying at the foot of the Kredouw Pass in the exquisite Prince Albert Valley on the R407, between Klaarstroom and Prince Albert (25km from Prince Albert).The farm lies at the foot of the mighty Swartberg Mountains. It totals 640 hectares of which 22 hectares are olives 6 hectares nuts (pecans and almonds) and 1.5 hectares port grapes. It also grows apples, cherries and figs. All these crops are irrigated with fresh, cold and pure mountain water collected from the streams of the Swartberg mountains

If you intend driving this pass a visit to nearby Prince Albert is a must. The town was founded in 1762 on a farm called Queekvalleij that had been on loan to Zacharias and Dina de Beer since 1762

Originally known as Albertsburg, when it obtained municipal status in 1845 it was renamed Prince Albert in honour of Queen Victoria's consort, Prince Albert of Saxe-Coburg. Prince Albert was historically part of the Cape Colony.

The Kredouw Olive Estate is a visitor friendly eco-farm based at the foot of the Kredouw Pass / Photo: Kredouwfarm.com

Prince Albert became a British garrison during the Second Boer War in 1899. The town was the site of several clashes between the British and the Boers during this period. Prince Albert has a small local population, mainly engaged in farming and tourism. The village has many authentic Cape Dutch, Karoo and Victorian buildings, thirteen of which are National Monuments.

||Click to download: Kredouw Pass (Note - This is a .kmz file which can be opened in Google earth and most GPS software systems)