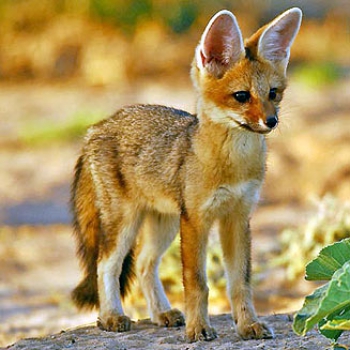 Rooihoogte is located on the R43 about midway between Villiersdorp and Worcester. It is not a major pass and other than the hairpin, is a relatively safe pass. The road has an altitude drop/gain of 198m over 9,28km producing an easy average gradient of 1:46, with the steep parts being at 1:8. This pass traverses prime agricultural land with lovely views of mountains, lakes, vineyards and orchards. 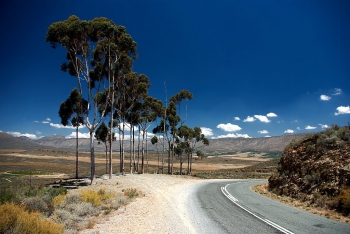 Over a distance of 7.6 km, the tarred Rooihoogte Pass displays 370m of altitude variance, with a comfortable average gradient of 1/20. Literally a stone's throw along the same road is Burgers Pass, formerly known as Koo Pass. Both of these passes were first designed by master road engineer, Thomas Bain in 1877.

The Rooihoogte Pass was originally known as Thomson's Pass and together with the Koo pass, both received name changes in the 1940's. This is reputed to be the pass with the highest summit altitude in the Western Cape. The pass is more enjoyable driving it in the descending mode with huge views over the rugged Langeberg mountains. 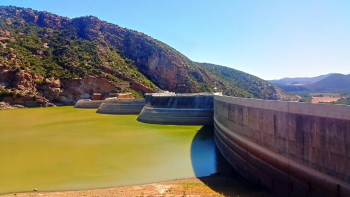 If you blink, you will pass through this little poort without noticing it. It's an official poort duly noted on the government 1:50,000 maps. The vital statistics are frivolous with the poort only being 1.1 km in length with an altitude variance of only 8m. The scenery is however, quite pleasant as the road follows the poort between two large hills - both comprising sandstone formations typical of the area.

The region offers wonderful tourism opportunities for the adventure traveller with the town of De Rust being the springboard and focal point of the area. The town is something of an artist's and writer's haven as many of the old buildings have been beautifully restored, as city folk have moved here to live a quieter lifestyle. The region also makes excellent port wine and it is of course also the southern gateway to the world renowned Meiringspoort. 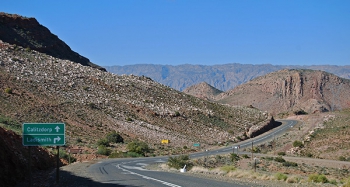 The Rooinek Pass is located approximately 17 km due South of Laingsburg in the Western Cape. The pass is fairly short at 3,15 km. and only gains/loses 73 meters of altitude, giving rise to an average gradient of 1:43. It is statistically a safe pass and has it's steepest gradient at 1:9.

This short poort is just over 1 km in length and rises just 24 metres. It forms part of the R358 route between Bitterfontein and Loeriesfontein in Namaqualand. If you want to get away from it all - this is a good place to escape to. You might find a few cars here during the flower season of August and September, but for the rest of the year, you will probably be the only vehicle on the road. The poort is so-named after the red rocks found in the walls of the poort. It's best to add the GPS coordinates of this poort into your GPS, otherwise you will probably not be aware of it. In terms of technical complexity, this little poort is insignificant with only one minor bend and a tiny altitude variance. 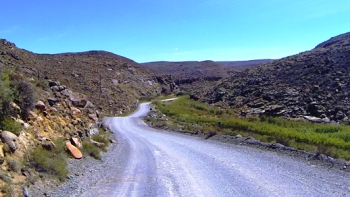 An easy gravel pass with gentle gradients and rugged scenery in the heart of the Karoo on the R381, which together with the historic Molteno Pass and the small Blounek Pass, forms a trio of passes on the R381/P0058 which connects Beaufort West in the south with Loxton and the Northern Cape to the north. Two river crossings and a narrow ravine make this an interesting drive. Cautionary: The second set of bends to the left are very dangerous, with no barriers and steep drop-offs. Add very tight corners, negative banking and loose gravel and this is a receipe for a rollover down into the ravine. We recommend a speed of 30 kph through this section.

The seaside town of Hermanus lies squashed into a narrow coastal plain with the Indian Ocean to the south and the Kleinriviersberge to the north. Running along the spine of this mountain range is a narrow road, partially tarred, known as Rotary Way and described officially as a 'scenic drive', which it most certainly is, but it also fully complies with the definition of a mountain pass. As the road is blocked off at its eastern end, it means one has to turn around and return the same way.

The road is 5,3 km long which makes it a 10,6 km drive in total. It climbs 188m producing an easy average gradient of 1:28, but the initial climb gets as steep as 1:15. The road is suitable for all vehicles, but it has no centre line and is narrow, so proceed with caution. The two view sites offer excellent views of Hermanus and the sweep of Walker Bay past the Kleinriviersvlei lagoon and on towards Gansbaai. 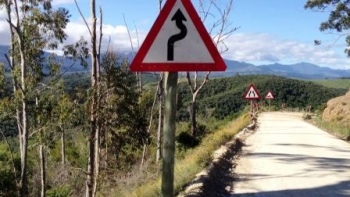 This short pass makes up for its lack of length in providing magnificent scenery of lakes, rivers, gorges and ravines amongst dense indigenous forests and pine plantations on the higher mountain slopes. It is one of several access roads between the N2 highway and the ever popular Old Cape Road or 7 Passes Road. This one is a gem and not used by many vehicles, so it's usually peaceful and quiet as its a sort of "road to nowhere". With two good tarred roads duplicating the purpose of this gravel pass, the majority of heavy traffic opts (as usual) for the tar. This leaves the Ruigtevlei Pass in peace and quiet. 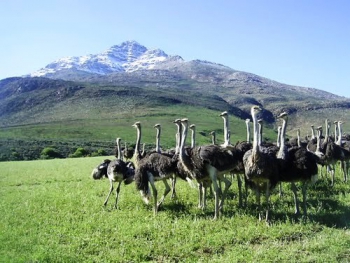 South Africa and especially the Klein Karoo (Little Karoo) has some of the finest gravel roads for the purpose of eco-tourism. With the popularity of the GPS, these minor roads are just waiting to be discovered. The Rust en Vrede Pass (Rest and Peace) provides a fabulous drive along a gravel road with sufficient gradient and curves to make it a memorable mountain pass. It follows the east/west axis of the Swartberg Mountains on its southern side. 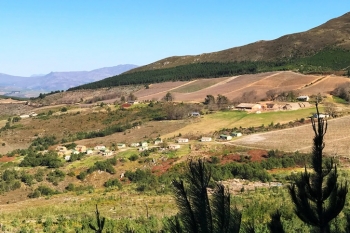 This 14,5 km long unofficial gravel pass crosses five farms as well as forestry zones and connects the Helderstroom valley in the east with the R43 close to the western side of the Theewaterskloof Dam. The pass is named after a farm near the summit of the same name, but it's also known by a variety of alternative names which include Onbekendepas (Unknown Pass), Elandskloof Pass (there is another Elandskloof Pass just to the north-west of Villersdorp), Theewaters Pass and Helderstroom Pass.

The pass contains 79 bends, corners and curves of which four exceed 90 degrees, but there are no hairpins. In addition there are some very steep gradients of 1:5. The road is generally wide enough for two big vehicles to pass, but the surface can be rough and stony, depending on recent weather. There are also some sections where it degenerates into nothing more than a basic two spoor track, so there's lots of variety on this route.

We recommend driving this route from east to west for a number of reasons, which include your general safety, convenience, prevention of getting lost and maximising on the scenery. Although this pass could be driven in a high clearance 'bakkie' in fair weather, we recommend a 4WD vehicle. It is not suitable for normal cars.