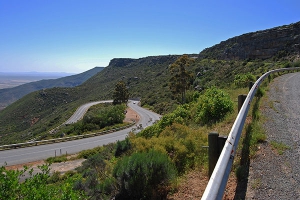 This beautiful tarred pass forms part of the R27 between Vanrhynsdorp and Nieuwoudtville and was originally built and designed by Thomas Bain.  It is just under 9 km in length and climbs 595m to summit at 825m ASL,  producing an average gradient of 1:15 with the steepest sections being at l:12. This is a well engineered pass with a good safety record providing you stick to the speed limits. This is amongst the top 10 passes of the Northern Cape and is a must drive offering grand views, tight chicane style corners and lots of variety. The pass is named after Petrus Benjamin Van Rhyn - a clergyman, politician and member of parliament in the old mission settlement of Troe-Troe. The town's name was changed in 1881 to Vanrhynsdorp.