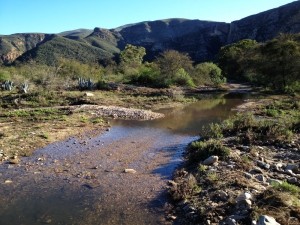 The Studtis Poort is exceptionally scenic and typical of all poorts, the gradients are very easy as the road essentially remains next to the river for most of it's length. You will be treated to towering mountains with near vertical cliffs and dense riverine vegetation. If you are able to comfortably clear the first river crossing, all of the other 8 crossings should be OK, as it is the same river and will have roughly the same amount of depth and current.

This lovely and spectacular poort on the R332 between Willowmore and Patensie links the two halves of the western section of the Baviaanskloof, covering 6,4 km and crossing over the Baviaans River nine times. In fair weather most of the main roads in the western Baviaanskloof can be driven in a normal car. Poorts are different to passes in that they usually have very gentle gradients. One of the downsides of this fact, is that water tends to remain in a poort much longer than on a pass and as a consequence, Studtis Poort is often prone to some deep-water crossings after periods of rainfall. We have two videos on offer. A completely dry traverse filmed in December 2017 and a much wetter version filmed in August 2012.

Published in The Eastern Cape
Read more...
Page 8 of 8