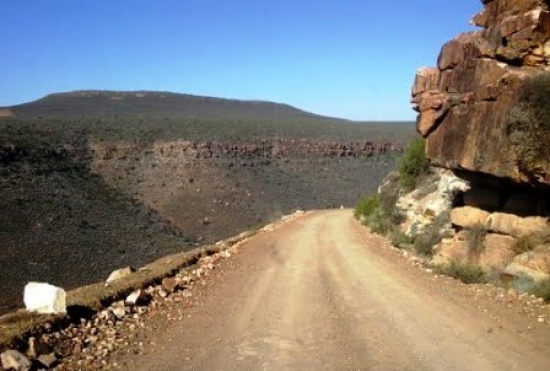 The Botterkloof pass is a fairly substantial altitude gaining pass in the Northern Cape between Clanwilliam and Calvinia. It is the third of a trio of passes on the R364 route for those travelling from west to east. In rainy weather or snowy conditions, this pass can become very tricky; even in a 4WD vehicle. The pass descends a total of 345m over a distance of 11,3 km producing an average gradient of 1:33 with the steepest parts measuring in at 1:10. There are sections near the summit with near vertical, unguarded drop-offs, which can be a bit intimidating for drivers unaccustomed to feeling so exposed. The more dramatic part of the pass is in the first 2,5 km near the summit.

The origins of the name are probably due to the large number of Botterbome that grow in the kloof. Tylecodon paniculatus can reach heights of 2 m, making it the largest of the tylecodons.  It is summer deciduous. The plants conserve energy by photosynthesising through their greenish stems during the hot dry summer months. The yellowish-green, papery bark is a very attractive feature of this plant and has given rise to the common name. During the winter, plants are covered with long, obovate, succulent leaves clustered around the apex of the growing tip.The botterboom is poisonous to stock, causing 'krimpsiekte'. In the past, the smooth, slippery stems were sometimes used to slide or ski at great speed down smooth rock faces or dam walls, adrenaline rushes before the days of bungy jumping!

The other two passes starting from Clanwilliam are the Pakhuis Pass and then towards the end of the tar at the Wupperthal/Biedouw valley turnoff, the smaller Klipfonteinrant Pass. If you are privleged enough to drive through this region in August or September, you will than likely be treated to some of the finest wild flower displays in the Cape. The pass lies to the east of the Doring River, which marks the border between the Western and Northern Cape.

A word of caution on the low level bridge over the Doring River. During winter when the river comes down in spate, it sometimes runs over the surface of the bridge. Never take a chance of crossing in these conditions as the Doring River is powerful and dangerous. it will make short work of any car and probably result in a drowning. Rather choose an alternative route. 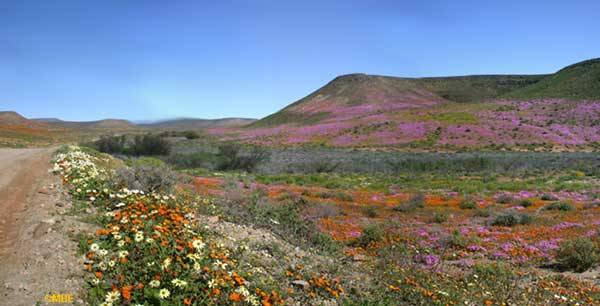 Springtime at the bottom of the pass / Photo: Trygve RobertsThis is also a pass with an extensive history dating back to the mid 1800's.

Major Charles Michell, the energetic Surveyor-General and Civil Engineer to the Colony was frustrated in his attempts to improve the transport routes to the interior. After he completed Sir Lowry’s Pass in 1830 all pass building was put on hold because the Governor had failed to obtain proper authority for the cost of the work and the Colony could not afford further expense. However Michell in the course of his surveying duties made a comprehensive list of possible routes through the mountains from Clanwilliam to Grahamstown for implementation when funding improved.

We can safely assume in his efforts around Clanwilliam he identified the route of the future Pakhuis Pass, and no doubt he would have continued with its logical extension up Botterkloof towards Calvinia and the further interior.

However when funding was sorted out by the new Colonial Secretary John Montagu after he arrived at the Cape in 1843, priority was given to the main route to the east (via the Montagu Pass) and to the north (via Michell’s Pass). It was not until the Colony really began to prosper after the discovery of diamonds that the lesser routes could be tackled. And so the Pakhuis-Botterkloof route had to wait until 1874 when Thomas Bain could give it his attention - not undivided, because he was heavily involved with Cogman’s Kloof and Garcia’s Pass at the same time. Bain pointed out to the authorities that the entire Calvinia region would benefit from this more direct road to the Cape. A further important consideration was that there was much better foraging and water available compared to the dry and desolate alternate route through the Tankwa Karoo.

With a small workforce of only 40 men (unlikely to have included convicts) Bain completed the route in 1877. While the Pakhuis Pass has seen periodic improvement, the Botterberg Pass has hardly changed from its original state.

John Montagu was a staunch Anglican with strict authorotarian principles. He had the vision to constitute the Central Roads Board, which prioritized and organised the road network in the colony, which spawned the Divisional Councils which served the Cape so well for over 130 years. His chief associate on the Board was Charles Michell who was the first great pass builder and road maker at the Cape.

Montagu made a name for himself and had (inter alia) the town of Montagu as well as the Montagu Pass outside George named after him. History shows that Montagu was previously stationed in Tasmania and after a bitter quarrel with his superior, found himself posted off to darkest Africa. 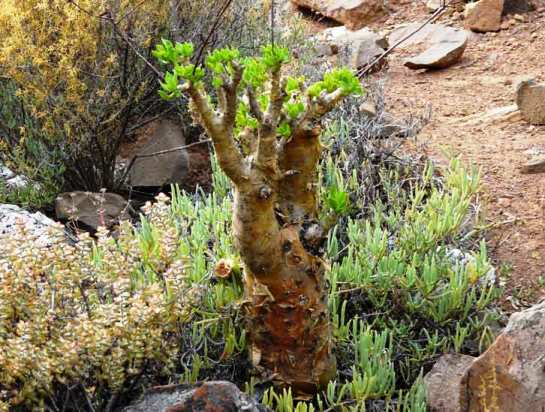 Botterboom / Photo: WikipediaTasmania's loss was South Africa's gain as Montagu was a man of considerable vision. Even today, most citizens would approve of his policy of making prisoners work off their debt to society in the form of hard labour. Montagu understood the value of a good road network. He was ably supported by two other great men. One was Andrew Geddes Bain - Scottish immigrant and self taught road engineer and geologist; the other was an engineer, Charles Michell (see Michells Pass near Ceres).

Michell served in the British Army in the artillery and retained his rank /title in civilian life. He was Civil Engineer to the Cape Colony and also held the post of Surveyor-General and as such, was Andrew Bain's superior. The fact that this pass is still in use today 150 years down the track, speaks volumes for the quality of the work done.

The descent provides panoramic views out over the Doring River valley with the Cederberg Mountains in the far distance, which are often snow capped during winter.

[Some historical information supplied and written by Tony Murray]

||Click to download: Botterkloof Pass (Note - This is a .Kmz file which can be opened in Google earth and most GPS software)

Published in The Northern Cape
Tagged under
More in this category: « Bastersnek (R369) Bergenaarspad Pass »
back to top