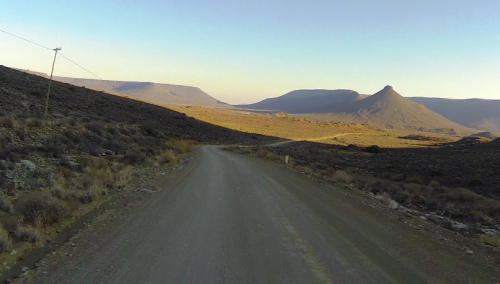 Northern view towards the end of the pass - Photo: Trygve Roberts

This minor pass is located some 35 km north-east of Calvinia in the Northern Cape. The name is interesting and a little misleading as this road does not conform to the definition of a poort and is much more of a classic 'down-up-down' profile type road over a nek.  It's one of those roads not many people know about and is a perfect road to explore by car, 4x4 or bike. The road connects the farms to the north of Calvinia with Brandvlei as well as Calvinia itself. With an average gradient of 1:54 no-one will struggle to climb over this little pass. The road reaches its steepest point on the northern side of the summit where the gradient reaches 1:11.

We filmed this little pass very early in the morning in the late autumn of 2017. There is a remarkable sense of space, peace and solitude and the views of the mountains around the northern side of Calvinia are absolutely breathtaking. The road is generally in a reasonable condition, but as is the case with all gravel roads, this can change rapidly after rain, so drive below 80 kph and beware of corrugations. The shakiness in our video is evidence of the corrugations on this road (this despite deflated tyres and operatring in full 4WD).

Getting there: It is not the statistics which will attract the adventure traveller here, but rather the majestic mountain scenery and sense of solitude that the Hantam Karoo offers. From Calvinia head east on the R27 for 17 kms. You will pass a road leading off to your right (south). This is the R354 to Middelpos. Ignore it and continue on for a further 1 km and take the next turn to the left (north-east) onto a gravel road, the P2286. The road is sign-posted 'KLIPWERF'. There is a dominant peak on the left you can use as a landmark, known as Tolpunt [1309m].

The Vlakhoeksberg near the southern side of the poort. / Photo: Trygve Roberts

The road swings progressively into the north keeping the huge bulk of the Hantamberg to the left (west). Soon the road crosses a disused railway track. The highest point of the Hantamberg is directly to your west with a summit height of 1597m ASL.  It is directly above Mierkloof (Ant Ravine). The road continues over fairly level terrain for another 15 km where it drops down to the Rietfontein se Rivier valley and bisects the farm Spitskop, which takes its name from the conical peak [1399m] clearly visible on the northern bank of the river 3km upstream.

The Hantam Karoo in all its early morning glory / Photo: Trygve Roberts

Looming ahead and to your left is the next mountain range known as Vlakhoeksberg [1530m] (Shallow Corner Mountain). The road keeps to the east of this mountain as it rises steadily up towards the Moordenaarspoort, which is 5 km away. The poort is instantly recognizable by the twin conical peaks it bisects, with altitudes of 1408m and 1435m respectively. These peaks are unnamed.

The Akkerendam Nature Reserve at Calvinia is an excellent venue for wildflowers in spring / Photo: PanoramioAs you crest the summit of the little poort another dominant stand alone koppie lies dead ahead, which is named Rondeberg [1361m] (Round Mountain) and in front of this mountain lies the farm Welbedacht. The road drops quickly down to the valley floor via set of easy double S-bends where the pass ends at the 3,1 km mark at a fork, marked Vanrhynshoek.

The road continues through beautiful mountainous terrain for many kilometers serving the many farms in this region. Eventually you will arrive at a Y-junction, where turning right (east) will get you to Brandvlei which is another 112 km distant. If you continue straight on the road passes more farms arriving at a T-Juntion after about 10 km. Here you have more options. Left will take you back to Calvinia (50 km) and right will also take you to Brandvlei but via a different routing (100 km) 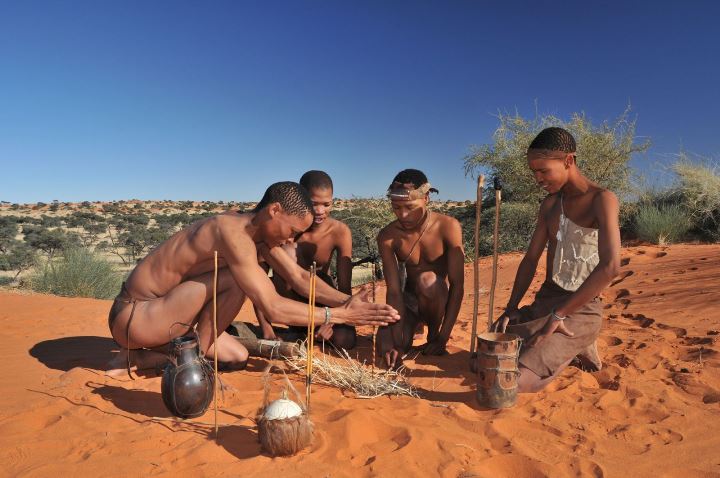 The KhoiSan were the earliest settlers of South Africa / Photo: Vivimetaliun.Wordpress.com

Please note that we filmed the pass in the opposite direction due to available light. The vast majority of travellers would normally approach this pass from the south, so we have described it from that direction. To approach from the north (as we have filmed it), head west out of Calvinia on the R355 for 19km and turn right at GPS S31.419988 E19.592632. Remain on this road for 36 km heading approximately north-east, till you arrive at a fork. Turn right at GPS S31.154246 E19.886215. This road heads east for 1 km, then gradually bends towards the south. Drive for 24 km to arrive at the northern start of Moordenaarspoort. You can reverse these directions to do an interesting circular loop from Calvinia back to Calvinia in an anti-clockwise loop.

Not many people know about this road. Go get it!

Footnote: We received information from Alta Coetzee who runs the guest-house "Die Hantamhuis" in Calvinia. She followed up on our request as to how Moordenaarspoort got it's name. Local farmer, Willie Burger, provides the answer as follows:

"There were two groups of Khoi-Khoi who lived in the area of the kloof. There was rivalry between the two groups and one of the females caused a lot of jealousy between different men from the two tribes. This resulted in the two tribes declaring war against each other, resulting in fierce fighting, which took place along the very spot where the road traverses the poort. There were many fatalities and the careful observer can still find signs in the poort, of a mass grave."

||Click to download: Moordenaarspoort (Note - This is a .kmz file which can be opened in most GPS software systems)

Published in The Northern Cape
Tagged under
More in this category: « Messelpad Pass (P2952) Ottaspoort (P2937) »
back to top