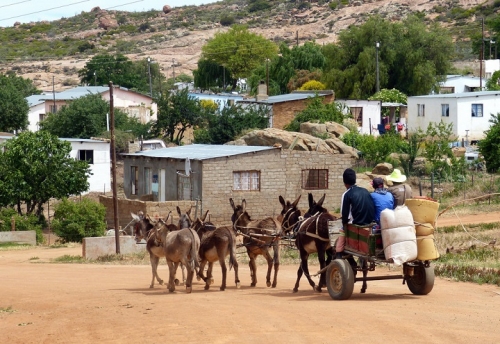 This decidedly steep, gravel pass offers excellent scenery of the granite clad mountain plateaus of Namaqualand. it's located at the small settlement of Leliefontein, where the huge Sentech tower dominates the summit point of the pass, about 20 km ESE of Kamieskroon and 34 km NNE of Garies.

The pass is 3,9 km long and displays an altitude variance of 182m, producing an average gradient of 1:21, with the steepest parts on the northern side of the summit presenting as steep as 1:7. During the rainy season, things can get slippery and muddy at this high altitude plateau and lightweight front wheel drive cars might experience  a loss of traction. At all other times of the year, the pass is perfectly suitable for all vehicles. Watch out for corrugations as well as a couple of blind rises and corners.

Getting there: Approaching from the north, a typical routing might be to depart the N7 at Kamieskroon and ascend up the Kamiesberg Pass and continue as the road changes into a southerly heading over the Draaiklip Pass to arrive 5 km after the Draaiklip Pass at the northern starting point of the Leliefontein Pass. It is best to read up the accurate directions via the hyperlinks for the two approach passes mentioned above. 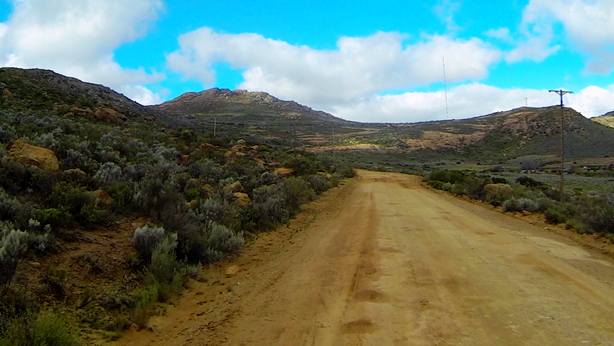 Looking south from the northern start of the pass / Photo: Trygve RobertsFor vehicles wanting to approach from the south, head up the Studers Pass from Garies and turn right at the intersection at GPS S30.390852 E18.139430 , then drive northwards for 11 km to arrive at the southern start/end of the pass.

We filmed this pass from north to south. The summit of the pass is easily identifiable from some distance away by the steel latticed Sentech tower that dominates the skyline just north of Leliesfontein. The tallest mountain slightly to the left of your view is the Kamiesberg [1527,2m]. This causes some confustion as the pass that ascends the mountains from Kamieskroon is called the Kamiesberg Pass. Many people think (and justifiably so) that this pass is called by that name.

After ascending the Draaiklip Pass, there is a plateau to be traversed which includes the farms Kliphoek to the east, followed by Langvlei to the west. Immediately after a sharp 90 degree left hand bend, the road begins ascending at a gradient of 1:11 as the road heads heads into the east via series of easy S bends. 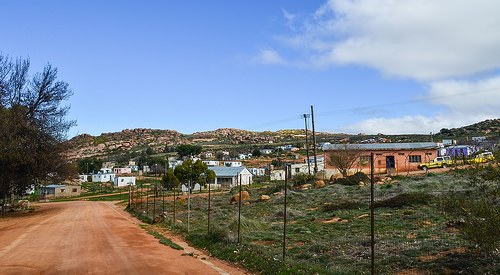 The village of Leliefontein / Photo: FlickrAt the 1,3 km point, the road bends through a wide right hand bend of 80 degrees where the gradient reaches 1:7 and the heading changes into the SSE. The road now enters a double S-bend section with fairly easy arcs and the gradients ease off to around 1:10. The views to the right are wonderful and the gain in altitude allows expansive views to the west.

We filmed this pass in mid winter and things were quite slippery near the summit as can be seen in the video. The Sentech mast grows ever larger as progress is made towards the summit. At the 2,3 km point, there is a sizable intersection which is brick paved and contains a small traffic circle. The left hand option leads away to the village of Leliefontein, whereas continuing straight ahead will take you past the tower and to the summit. If you have the time to visit the village, make sure you get to the historic Methodist Mission Church, which dates back to 1855. 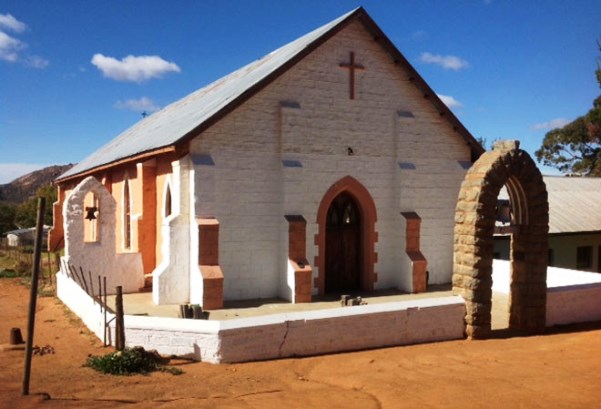 Methodist Mission Church circa 1855 / Photo: WikimediaThis is not the true summit point of the pass, which occurs 500m further at the 2,8 km mark. There is a split in the road at the summit point, which rejoins again 100m later. Make sure you keep left at the split. It's not often that public access to these huge towers allows such close proximity viewing, and if you appreciate modern engineering, this is a good spot to stop and marvel at the sheer height of this tower and the engineering involved in its construction. The actual tower compound is fenced in.

The summit is actually on a flat plateau which extends for 0,7 km at a steady altitude, before the much easier descent on the southern side commences at the 3,2 km point. At the southern end of the plateau, there is a small solitary dwelling on the left hand side of the road, with an access road marked as Toringberg. The steepest part lasts just 200m, then the gradients ease off to 1:20 as the pass ends at a side stream crossing at the 3,9 km mark at an altitude of 1340m ASL. Continue for 12 km to arrive at a staggered intersection, where you have choices. The easiest route back to the N7, is to turn right here and descend to Garies and the N7 via the Studers Pass - self one of the best gravel passes in Namaqualand and not to be missed. 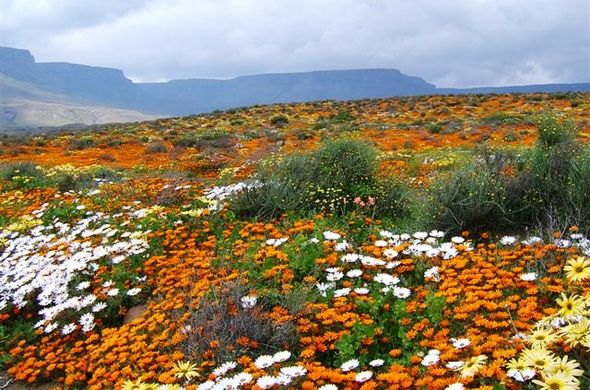 Namaqualand in bloom / Photo: SouthAfrica.org.zaThe first time legendary Boer guerrilla commander, Denys Reitz, arrived in Leliefontein, a settlement deep in the Kamiesberg of Namaqualand, he found utter devastation. It was New Year’s Eve, 1902, and Reitz was part of General Jan Smuts’ attack force sweeping through the Cape en route to Springbok. The various columns were to meet at the Leliefontein Mission Station, established in 1816 by the Methodist leader Barnabas Shaw.

“We found the place sacked and gutted, and, among the rocks beyond the burned houses, lay twenty or thirty dead Hottentots, still clutching their antiquated muzzle-loaders,” says Reitz in his landmark Anglo-Boer War book, 'Commando'.

They had been massacred by another Boer commander, Manie Maritz, in retaliation for an attack on his unit the day before. Reitz and Smuts were appalled by the brutality of the assault. 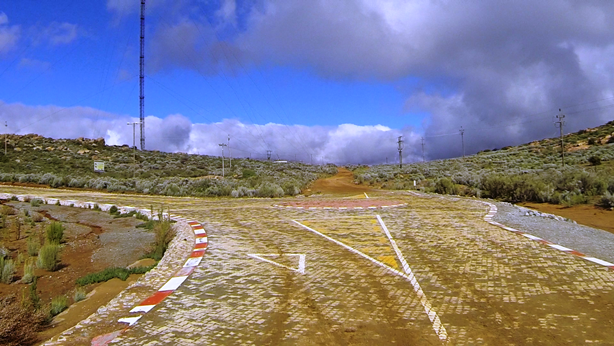 The oddly out of place paved traffic circle near the summit / Photo: Trygve Roberts

Leliefontein survived the war, however, and today it is one of Namaqualand’s secret seasonal hideaways. If you go to ‘see the flowers’, Leliefontein is on the insider’s route you’ll want to take. In springtime, these hills around Leliefontein are a sight to be behold.

The little hamlet lies just off the road between Kamieskroon and Garies. You have to look sharp to find the turn-off, but there’s a battered sign up there in the mist somewhere. Sadly, it sometimes falls down and travellers wander off without finding the place.

But once you get there, you’ll come upon a flourishing little tourism business run by Vera Engelbrecht and her team of local ladies. They will offer you food of origin and an unforgettable overnight stay in one of the reed matjieshuise specially built for visitors.

[This is an excerpt from Karoo Keepsakes II – The Journeys Continue, by Chris Marais and Julienne du Toit (MLM Publishers, 2013). Sourced from the website KarooSpace.]

||Click to download: Leliefontein Pass (Note - this is a .kmz file, which can be opened in Google earth and  most GPS models)

Published in The Northern Cape
Tagged under
More in this category: « Langkloof Pass (P2943 - Garies) Meketaanspoort (R386) »
back to top