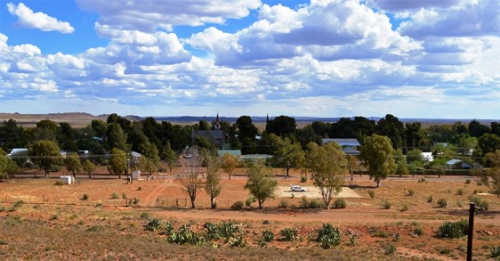 Kiewiet Se Hoogte is a minor gravel road pass located near Loxton in the Northern Cape. “Kiewiet” is the Afrikaans name for a species of bird, originally called a plover in English, but more recently referred to as a lapwing. It is most likely that the subspecies which gave its moniker to the pass is the Blacksmith Lapwing, whose vernacular name is derived from its repeated metallic “tink, tink, tink” alarm call, reminiscent of the sound a blacksmith’s hammer makes as it strikes an anvil.

Getting there: To approach from the east, start from the prominent NG Kerk in the centre of Loxton. Travel on Jooste Street (the R381) in a southerly direction for 1.3 km, then turn right onto the R356. After 12.1 km from this point you will reach the eastern start of the pass. To approach from the west, travel from Fraserburg along the dusty R356 in a north-easterly direction for 80.5 km to S31.573482 E22.222817, which is the western start of the pass. 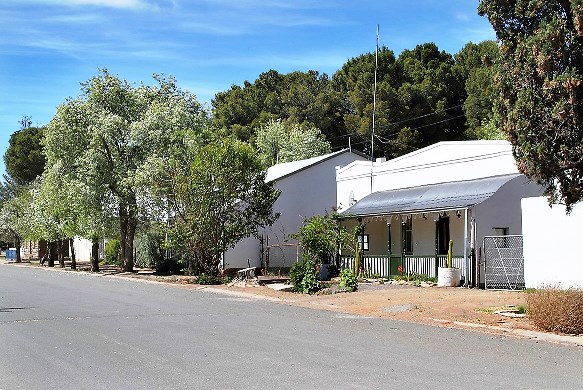 A quiet street in Loxton / Photo: MapioWe have filmed the pass from west to east. From the start, the road ascends at a fairly sharp gradient for 400 metres, then flattens out slightly until the summit is reached after 850 metres, marked by a farm gate on the left-hand side. The descent now begins, with the road continuing in an east-north-east direction, still arrow-straight at this point. At the 2.0 km mark, the road curves to the left through 15 degrees, the only bend on this entire pass. Soon after the curve is negotiated, there is a sudden sharp dip in the road, and a small dam appears on the left-hand side. The gradient flattens out, and continues to descend gradually until the end of the pass is reached at the 3.4 km mark. The road surface throughout the length of the pass is good, and should not present problems for any type of vehicle.

Loxton, eighty kilometres west of Victoria West on the tarred R63, is one of those rare Karoo villages that has plenty of trees. It’s pretty and really peaceful, although the lack of activity on the streets belies the life going on behind closed doors. Roads are lined with 100-year old trees, and narrow leiwater channels are used to flood-irrigate resident's gardens. In spring, the air is filled with blossom-scent and in summer fruit and vegetables sprout from enthusiastic gardeners’ plots. Donkey carts klip-klop through town sedately, their owners waving as they pass.

Many of the original 100+ year-old houses remain and are good examples of typical Karoo architecture. The oldest building, the original horse stable of the farm Phizantefontein, is a portion of the now redundant power station at the eastern end of Magrieta Prinsloo Street.

The unique stone corbelled houses that are shaped like old-fashioned beehives are also found around Loxton. In fact, these dwellings only occur in a small area of the Karoo roughly between Loxton, Fraserburg, Williston, and Carnarvon. They were built from 1811 onwards by the early trekboers (migratory farmers) and due to the lack of other building materials, consist solely of local stone and have no supporting roof beams.

Other points of interest in the area include bird watching (after good rains) on and around farm dams, a church built of local sandstone, and a replica Dutch castle and windmill, which looks like it’s stepped straight out of Disneyland. This is one of the two largest garlic-producing areas in the country.

Originally the farm Phizantefontein, Loxton was bought from AE Loxton by the Dutch Reformed Church in 1899. Built to serve the sheep-farming community, it became a municipality in 1905.

Loxton is also the headquarters of the Riverine Rabbit Working Group. If you have seen a riverine rabbit, count yourself among a very small, lucky and exclusive club. There are fewer than 300 breeding adults left, and they’re nocturnal. You can find them only along the river courses in the semi-desert Karoo.

||Click to download: Kiewiet se Hoogte (R356) (Note - This is a .kmz file which can be opened in Google Earth and most GPS software systems)

Published in The Northern Cape
Tagged under
More in this category: « Hantamsrivier Pass (P2289) Domorogh Pass (Richtersveld NP) »
back to top