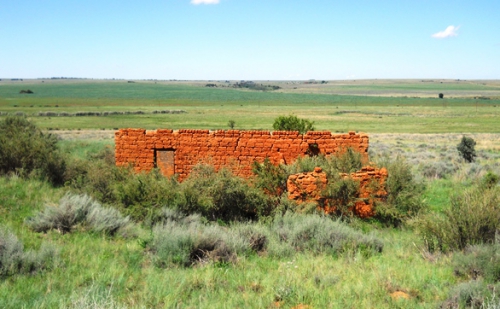 Geyersnek is located approximately 18 kms to the south-west of the small town of Swartruggens, in the North West province. The pass is named after Hendrik Frederick Christiaan Geyer (1884 – 1964) of the farm Rietfontein, and is situated on an obscure public road to nowhere, the D1065. The road surface is gravel (red clay) but is usually in a reasonable condition.

Although in dry weather a 4x4 would not be required, a high clearance vehicle is strongly recommended to drive this pass. The scenery around Geyersnek and on the approach roads is spectacular and lush, with rolling pastures and game farms in every direction, and is a nature photographer’s dream, particularly in spring or summer.

Getting there: To approach this pass from the north, travel from Pretoria in a westerly direction along the N4 towards Rustenburg. Go past the town and travel to Swartruggens, approximately 60 kms from Rustenburg. As you enter the town, there is a long straight descent, at the bottom of which is a bridge that crosses the Elands River. Immediately after the bridge, turn left onto the R53 – the intersection is clearly signposted as “R53: Ventersdorp”. 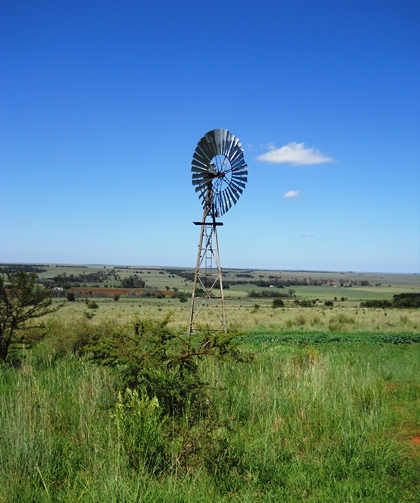 To approach from the south, travel to Magaliesburg, then take the R509 towards Koster. Travel straight on through Derby, which is 53 kms from Magaliesburg, then continue along the R509 for another 16 kms to Koster. As you enter the town, your GPS device might indicate a right turn; ignore this, and continue straight along the main road, which becomes the R52 at this point. Travel for 34 kms to S25.994623 E26.608101, then turn right onto the R53. Drive for another 27 kms to S25.764765 E26.612770, then turn left onto the D54, which is a gravel road – the turn is clearly signposted as “Rietfontein”. As you travel along this road, you will see Geyersnek in the distance ahead of you, and the original Rietfontein farmhouse will be on your right as you approach the pass. When you get to a T-junction after 5.2 kms, you will have a choice. If you turn right, you will already be on the upslope of Geyersnek; to get to the actual start of the pass, turn left, travel for 600 metres to S25.748543 E26.567263, then do a U-turn – this is the southern start point of the pass.

We have filmed and described this pass from south to north. At the start, the road crosses a bridge over the Vanstraatensvlei River, then immediately begins to ascend as the road follows a long, shallow left-hand curve. At the 600 metre mark, there is an intersection to your right, and the gradient kicks up as the road straightens into a north-westerly direction. The summit is visible ahead of you, and the gradient gets even steeper as you approach. The road condition
deteriorates quite badly here, due to washaways from the rain, so adjust your speed accordingly.

The old Rietfontein farm house / Photo: Mike LeicesterThe red clay surface of the road is no problem in the dry, but would become a nightmare when wet, even if you are in a 4 wheel drive vehicle. The summit is reached after 1.4 kms, and the road then curves back in a right-hand turn towards the north. The descent is gradual and straight, and the end of the pass is reached after 2.8 kms. There is a field filled with hundreds of protea bushes on your left; this would probably be absolutely magnificent in midsummer when these beautiful flowers begin to bloom, particularly after good rains.

The small town of Swartruggens was founded in 1875 on the farms Brakfontein and Scheepersrus. It takes its name from a series of hills in the area, formerly known as Zwartruggens, a Dutch word for “black ridges”. It is situated on the Elands River, and is roughly equidistant between the towns of Rustenburg and Zeerust, all of them located on the N4 national highway which spans the northern part of South Africa on an east-west axis. 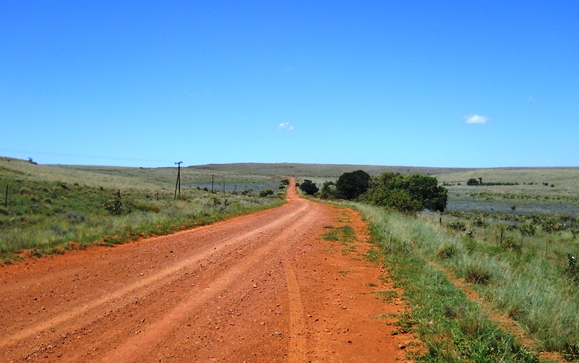 Looking south from Geyersnek / Photo Mike LeicesterDiamonds were discovered north of the town in 1932, and today a few small mines and diggings are still operational. Other commercial activities include cattle and game farming, and there are a number of private wildlife lodges in the area.

The town featured prominently in the 2nd Anglo-Boer War. A number of battles took place in the area, including the Siege of Elands River, where Colonel Charles Hore and some 500 of his troops were trapped and besieged by General de la Rey for 13 days. Only when Lord Kitchener was diverted from his fruitless task of searching for the elusive General Christiaan de Wet, and was sent with three brigades to Swartruggens, did the Boer forces withdraw. After the Siege of Mafikeng, Robert Baden-Powell (the founder of the Boy Scouts movement) established a supply depot in Swartruggens as he moved towards Pretoria.

All photographs and text by Mike Leicester

||Click to download: Geyersnek Pass  (Note - This is a .kmz file which can be opened in Google earth and most GPS software systems)

Published in North West
Tagged under
More in this category: « Sephton's Nek (R49) Magatasnek (N4) »
back to top