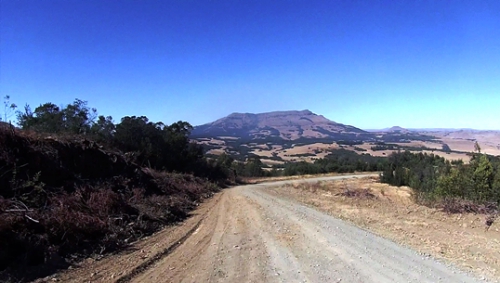 Scroll down to view the map & video. It is recommended to watch this video in HD. (Click on the "quality" button on the lower taskbar of the video screen and select 720HD.) Wait a few seconds for the video to display…..

Getting there: From Newcastle, drive north towards Volksrust on the N11 over Ingogo Heights and Laings Nek Pass. Turn left onto a gravel road 2 km after the summit of Laings Nek at GPS S27.446713 E29.864291. This is also the eastern starting point of the Majubanek pass. 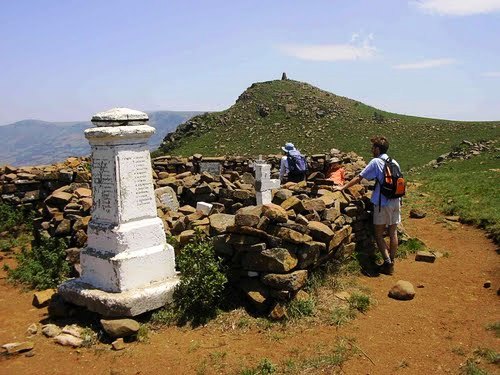 Hike to the top of Majuba from the summit of the pass / Photo: RedcoatThe road drops downhill briefly to cross a small river, then ascends gently for the first 1,5 km at an easy gradient, but things change quickly after that as the road climbs steeply towards the 1848m high summit via several bends, but none are very sharp. The summit is reached at the 3,76 km mark. The scenery from the summit is majestic with excellent views of the 2102m high Majuba mountain from the northern perspective. From the summit a road leads off to the left, where access to the Majuba Commerative Camping sites can be gained. From here one can hike or do a horse trail up Majuba to visit the memorial and battle sites dating to 1881.

The descent on the south western side is considerably steeper than the ascent, and it is here that gradients of 1:5 will be encountered. At the 4,8 km mark, a series of S-bends need to be negotiated and speed needs to be reduced through this section. The road follows the course of the Ouhoutspruit down the valley.

The pass ends after 8,8 km at an altitude of 1582m ASL near the farm 'La Belle Esperance'. Continue for a further 36 km where the road joins the R34 just to the east of Memel in the Free State.

Although small in scope, the battle of Majuba Hill is historically significant for four reasons:

Some notable British historians, although not all agree, claim that this defeat marked the beginning of the decline of the British Empire. Since the American Revolution, Great Britain had never signed a treaty on unfavourable terms with anyone and had never lost the final engagements of the war. In every preceding conflict, even if the British suffered a defeat initially, they would retaliate with a decisive victory. The Boers showed that the British were not the invincible foe the world feared. [Para source Wikipedia]

||Click to download: Majubanek (Note - this is .kmz file and can be opened in Google earth and most GPS models)

Published in KwaZulu-Natal
Tagged under
More in this category: « Schuinshoogte (P279) Kwaggasnek (P213) »
back to top