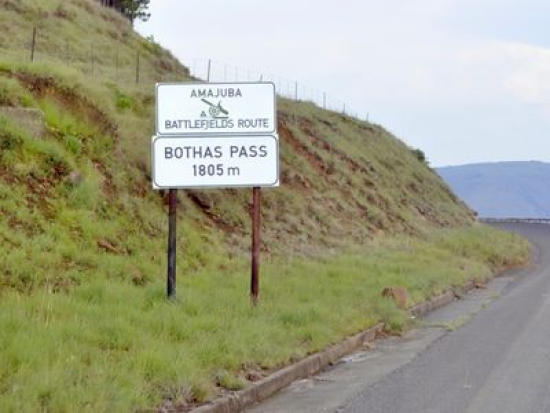 This pass connects the Free State farming town of Memel via the R34 with the KZN town of Newcastle and straddles the border between the Free State and KZN. The pass starts at the summit altitude of 1809m ASL and descends to 1569m taking you 245 meters down the escarpment and in the process producing a gradient of 1/21 over 5.0 km., which is moderate. There is one U shaped bend halfway down the pass which turns through almost 170 degrees, but the arc is fairly wide, making it fairly safe providing the speed limit is complied with. With a summit altitude not far under the 2000m mark, it does sometimes snow on this pass.

The summit of the pass literally straddles the border of the adjacent provinces. Since this pass is a cross-province pass and lies in both the Free State as well as in KZN, it will be featured under both provinces pass listings.

Botha's Pass has significant historical value and was key point which the boer commandos held for a long time. On the 8th June, 1900, the British forces under command of General Buller, captured the pass, thereby enabling the British to advance into the Orange Free State. Remains of the trenches can still be seen near the pass summit. Botha's Pass forms part of the historical Amajuba Battlefields Route.

General Sir Redvers Henry Buller, VC, GCB, GCMG (7 December 1839 – 2 June 1908) was a British Army officer and an English recipient of the Victoria Cross, the highest award for gallantry in the face of the enemy that can be awarded to British and Commonwealth forces. He served as Commander-in-Chief of British forces in South Africa during the early months of the Second Anglo-Boer War and subsequently commanded the army in Natal until his return to England in November 1900. 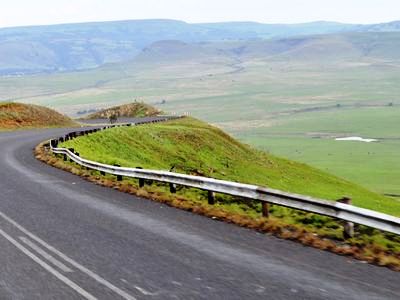 Beautiful views over the KZN highlands / Photo courtesy of Pathfinda.comThe pass starts at an altitude of 1809m ASL. It sees occassional snowfalls during the coldest part of the winter. In these circumstances, adjust your speed to suit the road conditions or take an alternative route to your destination.

At this stage the heading is ESE, but it doesn't last for much more than 700 metres, when the next bend changes the heading through a wide right hand bend into the east. Thisupper section is also the steepest on the pass and offers the best views. During the summer rainy season the views are wide and almost England green. An easy S-bend follows, after which the road bends slightly to the left and the border is crossed.

The descent continues for 800m where a 170 degree left hand bend has to be negotiated as the road skirts a nose in the mountain-side. This is not a true hairpin as the arc is quite easy and comfortable.

After the hairpin, the the road swings into the north-east then enters a 90 degree right-hand bend, but the radius is wide enough to be able to maintain a steady speed.The descent gradient gets a bit steeper as this lower part of the pass drops in a dead straight descent of 3 km.

The pass ends at its eastern (KZN) side at the crossing of the Seepwaterspruit (Soapwater Stream) at an altitude of 1574m ASL. Continue another 30 km to the town of Newcastle. Set at the picturesque foothills of the northern KwaZulu-Natal Drakensberg Mountains, Newcastle is located in the north west corner of the province along the Ncandu River and is one of the country's main industrial centres.

||Click to download: Bothas Pass R34 (Note - This is a .Kmz file which can be opened in Google earth and most GPS software)

Published in KwaZulu-Natal
Tagged under
More in this category: « Knight's Pass (P40) Burgers Pass (P308) »
back to top