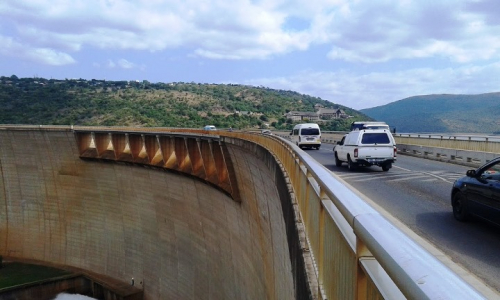 This long tarred pass connects the town of Jozini with the N2 national highway and traverses the mountains on the south eastern side of the Pongolapoort Dam. Although the average gradients are a gentle 1:49 there are some fairly steep sections that reach 1:7 closer to the summit point.

This is a fairly modern pass with good engineering standards, but there are a number of cautionaries to be aware of, which include, slow moving vehicles, barrier line transgressions, pedestrians, minibus taxis and livestock on the road. The road traverses a number of rural villages, so pay attention to a variety of changes in the speed limit. This is an all weather pass which is suitable for all traffic.

The main attraction is the wonderful scenery which includes a range of vistas over the dam from the comfortable height of the ridge. If you're a fisherman, you can catch Tiger fish here.

Getting there: To approach from the north (in the direction we have produced it), there are a number of approach options involving a complex network of gravel roads. For the first time visitor it's best to drive the pass from south to north first, then turn around at the dam wall and retrace your route back to the N2.

Starting in the centre of the town of Jozini at an altitude of 231m, the road heads north-west, then west offering sweeping views of the dam wall and surrounding hills. Before strting your route back to the N2, do take the time to visit the dam wall and also note the irrigation canal which runs for a great distance into the south-east offering a lifeline of fresh water for farmers in the valley. 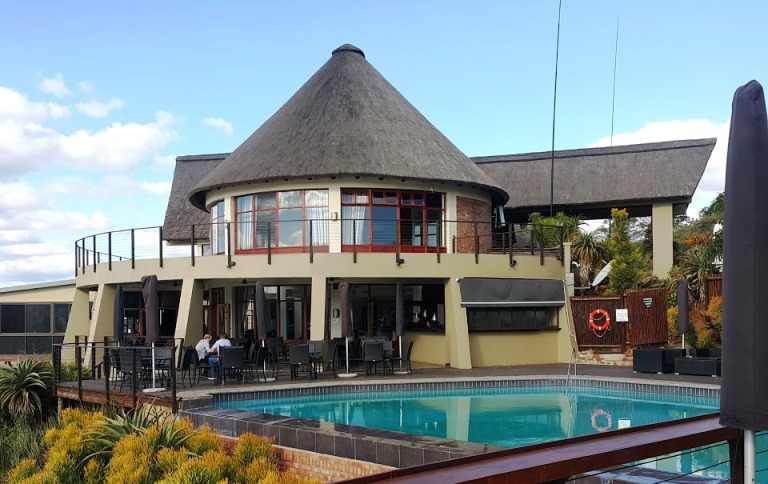 A wide range of accommodation on offer in Jozini / Photo: Fred Erasmus

As the last homes in Jozini are left behind, the road climbs steadily up a side ravine of the Pongolapoort to reach the first false summit of 363m at the 3,1 km mark. The road enters a big S-curve at this point, descending rapidly to the lowest point of the ravine, then climbs just as quickly up the other side. The arcs of these two bends are each in exces of 150 degrees but the rate of turn is easy, therefore not requiring a reduction in speed.

Once through the S-bend at the 4,7 km point, the heading settles down into the south-west, once more offering wide views over the vast expanse of the waters on the right. The entire stretch from the 4,7 to the 7,9 km traverses a rural village called Nsimbane and drivers need to remain alert here for slow moving vehicles entering from the many side roads, as well as livestock and pedestrians and the never ending stream of minibus taxis that ply this route. The road also reaches the 2nd false summit of 403m at the 6,9 km point.

The climb gradient through Nsimbane is very gentle, but from the 7,6 km mark, the gradient kicks up to to 1:10 as the 3rd false summit of 497m is reached at the 7,9 km point. From this point, the road enters a big S-curve with wide and easy arcs, first descending briefly, then climbing quickly again to reach the true summit of 504m at the 10,3 km mark.

Once over the summit point, the easy part of the pass is behind you, and the descent towards the N2 begins in earnest with the gradients ramping up to 1:7. The road descends a north-south running ridge of the Ubombo Mountains along its western flank and a number of impressive cuttings can be seen along this section. Most of the corners are easy and seldom reach an angle greater than 30 degrees. 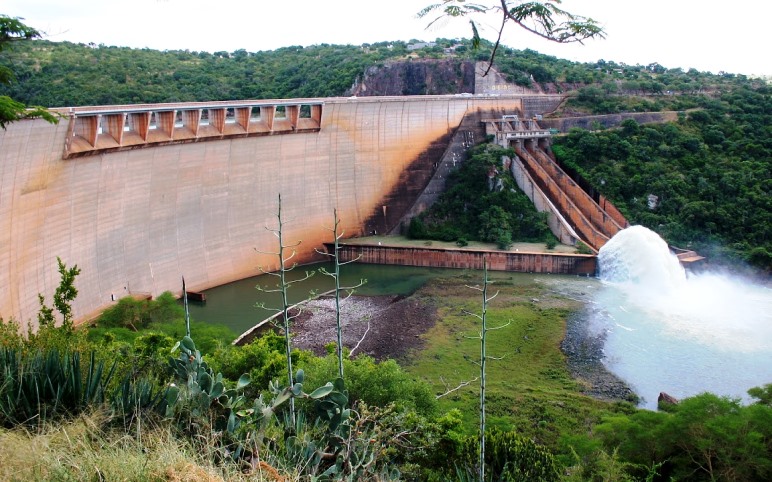 From the 13,4 to the 16th km mark the road is arrow straight, but the final right hand bend of 20 degrees sees the gradients getting easier as the road drops gently down the 17,2 km mark, which marks the end of the pass at an altitude of 151m ASL. Continue for a further 3 km to intersect with the N2. Turn left to go to Hluhluwe or right to head to Pongola.

Pongolapoort Dam, commonly referred to as Lake Jozini, is an arch type dam in northern KwaZulu-Natal, located on the Phongolo River. The dam is situated 280 km north-east of the port city of Durban. The dam was constructed in 1973 at the eastern end of the narrow gorge separating the Lebombo and Ubombo ranges and was the largest dam in South Africa at the time of its construction. 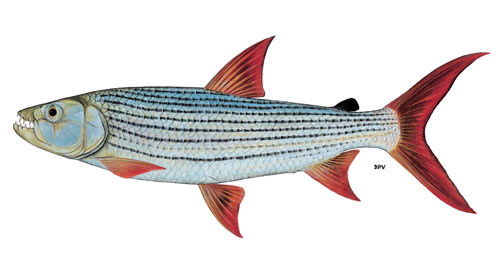 Prior to the construction of the Pongolapoort Dam the land was Africa's first formally recognised conservation area. The Pongola Game Reserve was proclaimed in 1894 by the then President of the Transvaal Republic - Paul Kruger. This would ultimately lead to the proclamation of the Hluhluwe-Imfolozi, Mkuze and Ndumo Game Reserves as well as one of Africa's greatest wildlife conservation parks, the Kruger National Park. The dam is big by any standards and measures almost 27 km along the north-south axis.

The dam is flanked by private wildlife reserves as well as the Pongola Game Reserve which has many private lodges as well as campsites for fishing. Wildlife and birdlife abound in the area. Mammals to be sought include elephant, leopard, white and black rhinoceros, buffalo, hippopotamus, waterbuck, bushbuck, nyala, greater kudu, zebra, giraffe and spotted hyaena.

The dam and its surrounds support over 350 bird species which includes rarities such as African broadbill, saddle-billed and yellow-billed storks, African finfoot, Pel's fishing owl and Narina trogon. The dam also supports a breeding colony of pink-backed and great white pelicans. Additionally the dam supports a stable population of Nile crocodiles.

The dam is also home to the southern most population of tigerfish. Other fish species include catfish and kurper.

||Click to download: Jozini Pass (Note - This is a .kmz file which can be opened in Google earth and most GPS software systems)

Published in KwaZulu-Natal
Tagged under
More in this category: « Ngwele Road Pass (MR259) Mayaba Pass (R33) »
back to top