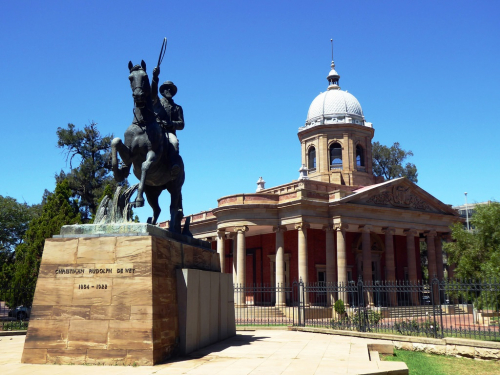 Generaalsnek is a very minor pass located on the tarred R26 road between Fouriesburg and Ficksburg in the Eastern Free State highlands, close to the border with Lesotho. The entire length of the R26 is generally in a very bad condition, with potholes and patches everywhere, but this route can be driven in any vehicle and in any weather.

There is nothing to distinguish this little rise of just 49 metres with any of the other rises and falls along this road, except that it has been officially marked on the 1:50000 maps. The name of the pass was no doubt derived during the 2nd Anglo-Boer War, when this area was a hotspot of action, and there are many other passes in the vicinity that also have war connections. Perhaps it was named after that wily old fox very active in this region, General Christiaan De Wet? 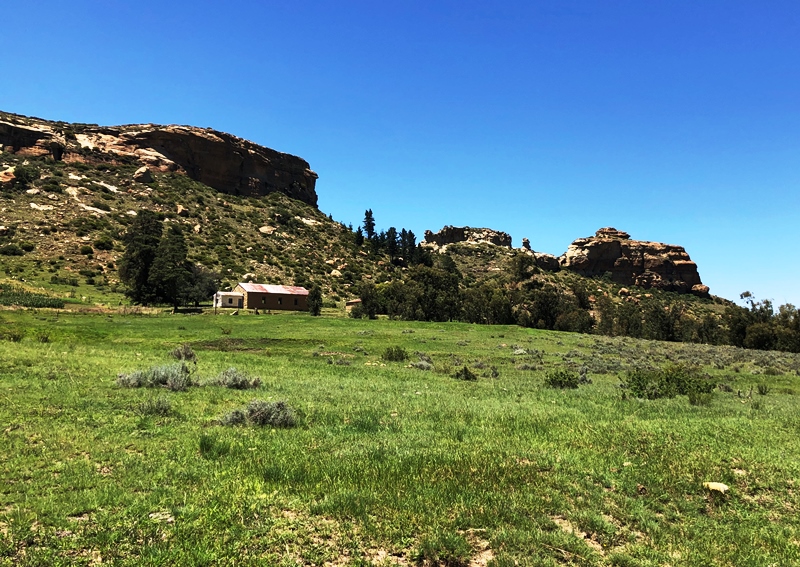 A farmhouse near the pass / Photo: Mike Leicester

We have filmed the pass from north to south, in the descending mode. Other than one very shallow left-hand curve right at the beginning of the route, this is a dead straight road which descends a total of 49 metres from the nek itself, ending at the 1.6 km mark as you cross over a small stream. The high mountains in the far distance on the left-hand side are the Malutis; they are all inside the Kingdom of Lesotho. The notch-shaped formation on the skyline directly ahead of you on the descent is another official pass called Kommandonek. 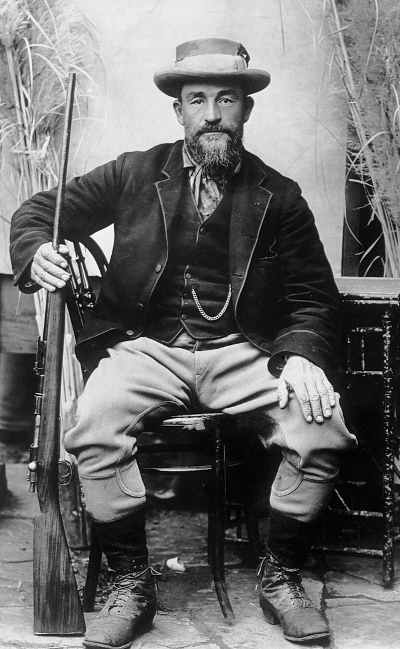 If you research the generals that commanded the Boer forces during the 2nd Anglo-Boer War (1899 – 1902), there are some very familiar names. These include Louis Botha (later to become the first Prime Minister of the Union), Koos De La Rey, Manie Maritz, Nicolaas Smit (leader of the Boer forces during the Battle of Majuba), Jan Smuts (probably the most famous of them all), and of course our personal hero, Christiaan Rudolf De Wet.

De Wet was born on the 7th of October 1954, on the farm Leeuwkop in the district of Smithfield in the Free State. He later resided in Dewetsdorp, which was named after his father, Jacobus Ignatius De Wet. He served in the 1st Anglo-Boer War of 1880–1881 as a Field Cornet, taking part in the Battle of Majuba in which the Boers achieved a stunning, and ultimately war-ending, victory over the British. This led to the reinstatement of the independence of the Zuid-Afrikaansche Republiek, more commonly known as the Transvaal Republic.

In September 1899 De Wet and his three sons were called up as ordinary private burghers without any rank. He was a member of the Heilbron commando and they were ordered to proceed to the Natal frontier. On 11 October 1899, while he was reconnoitring the Natal frontier, De Wet was elected vice-commandant of Heilbron. He participated in the battle at Nicholson's Nek on 30 October, when 954 British officers and men surrendered. Thereafter he took part in the siege of Ladysmith.

On 9 December 1899 De Wet received a telegram from the State President, M.T. Steyn, informing him that he had been appointed a Fighting General and was to proceed to the Western frontier. He found General Piet Cronje in command of the Boer forces ensconced at Magersfontein South of Kimberley, while the English were at the Modder River. De Wet was to be Cronje's second-in-command. The British advance commenced on 11 February 1900 with General French outflanking Cronje at Magersfontein and riding towards Kimberley. De Wet's raid on the ox wagon convoy at Watervals Drift, capturing 1600 oxen, did not stem the tide. Kimberley's siege was relieved on 15 February and Cronje surrendered with 4000 men at Paardeberg on 27 February. Shortly thereafter De Wet was appointed Commander-in-Chief of the Free State forces. They could not contain the British advance towards the Free State capital, Bloemfontein, which was taken unopposed on 13 March 1900. 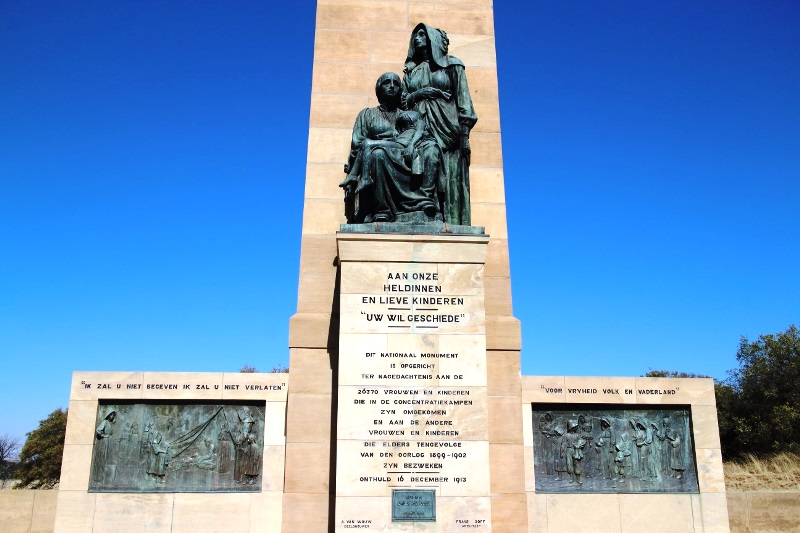 His next successful action was the surprise attack on Sanna's Post near Bloemfontein on 31 March 1900. This was followed on 4 April by the victory of Reddersburg. He came to be regarded as the most formidable leader of the Boers in their guerrilla warfare. Sometimes severely handled by the British, sometimes escaping only by the narrowest of margins from the columns which attempted to surround him and falling upon and annihilating isolated British posts, De Wet continued his successful career to the end of the war, striking heavily where he could and evading every attempt to bring him to bay. His brother Piet Daniel De Wet, another successful Boer general, was captured by the British in July 1901 and subsequently served against Christiaan as a member of the National Scouts (Boers serving with the British forces).

De Wet took an active part in the peace negotiations of 1902. Briefly (30 to 31 May) he took on the role of Acting State President of the Orange Free State, when President Steyn had to leave the negotiations due to illness. De Wet was one of the signatories of the Treaty of Vereeniging. 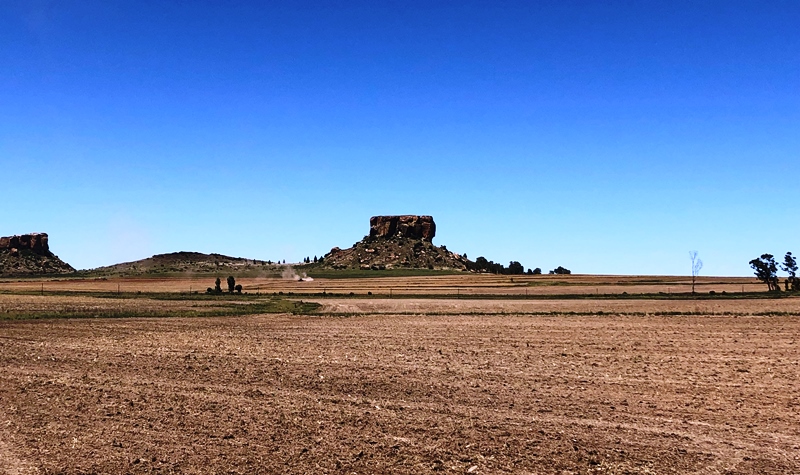 At the conclusion of the war he visited Europe with other Boer generals. While in England, the generals unsuccessfully sought a modification of the peace terms concluded in Pretoria. De Wet wrote an account of his campaigns, an English version of which appeared in November 1902, under the title “De Stryd Tusschen Boer En Brit”. In November 1907, he was elected a member of the first parliament of the Orange River Colony, and was appointed Minister of Agriculture.

De Wet was one of the leaders of the Maritz Rebellion which broke out in 1914. He was defeated at Mushroom Valley by General Botha on 12 November 1914, and taken prisoner by Commandant Jorrie Jordaan, the first time that this had happened during the three wars in which he had taken part. At the time he remarked: “Thank God it is not an Englishman that has captured me after all”. He was sentenced to a term of six years imprisonment, with a fine of £2000. He was released after one year, after giving a written promise to take no further part in politics.

De Wet became ill and progressively weakened until, on the 3rd of February 1922, he died on his farm. Jan Smuts, who had become Prime Minister, cabled his widow: “A prince and a great man has fallen today.” De Wet was given a state funeral in Bloemfontein and buried next to President Steyn and Emily Hobhouse at the foot of the memorial to the women and children who had died in the concentration camps. On the hundredth anniversary of his birth, a bronze equestrian statue, by Coert Steynberg, was unveiled at the Raadsaal in Bloemfontein.

||Click to download: Generaalsnek (R26)  (Note - This is a .kmz file which can be opened in Google earth and most GPS software systems)

Published in The Free State
Tagged under
More in this category: « Caledonspoort (P29) Witnek (S162) »
back to top