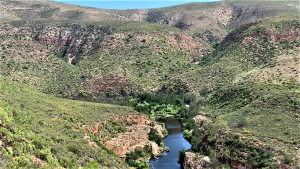 The Brakkloof Pass is a mixture of a poort and a mountain pass. It's a fairly long one at just under 13 km and despite the easy average gradient of 1:65, there are some very steep sections at 1:5, especially near the southern end on the approach and descent to the Kouga River valley, which will probably create traction issues for non 4WD vehicles in wet weather. The pass has to be driven in tandem with the Kouga-Kleinrivier Pass which lies further to the west. The two passes together form a wide loop with Joubertina as a start and end point. Allow two hours to do the loop excluding stops.

The kloof is extensively farmed so the usual cautionaries apply of expecting livestock, pedestrians and slow moving farming vehicles on the road. Visually this is a lovely road to explore and note that there are many cattle grids, which are best crossed at 30 kph. The pass is located about 33 km to the ENE of the farming town of Joubertina off the R62 route through the fruit farming region known as Die Langkloof.