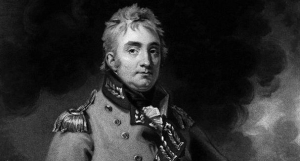 The Swaershoek Pass (translated as Brother-in-laws Pass) is a major gravel pass located about 20 km south-west of Cradock. The pass is quite long at 8,1 km and has an altitude variance of  468m which produces an average gradient of 1:17, but there are many sections which are considerably steeper at 1:11. Despite the steep gradients and unpaved surface, the pass is well designed and is suitable for all vehicles in fair weather. The pass connects Cradock with Pearston 70 km further south.

This pass and its approach roads offer some of the best Eastern Cape scenery imaginable. Anyone willing to get a bit of dust on their vehicle will be richly rewarded travelling this route on the R337 which includes another great gravel pass much further south, called the Buffelshoek Pass. 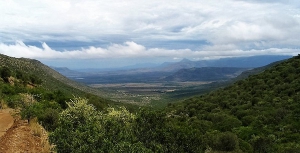 The Buffelshoek Pass lies on the R337 linking Pearston in the south with Cradock in the north-east. This rugged and beautiful pass offers sublime scenery towards the south over well wooded valleys and expansive plains packed with game. The pass quickly deteriotes in heavy rain or snow conditions and becomes dangerous for non 4WD vehicles, but in fair weather the road is perfectly suitable for all cars.

The pass is 3,9 km long and has an altitude variance of a 330m producing a challenging average climb rate of 1:12 with the steeper sections measuring in at 1:6. It's located just 15 kilometres north-east of Pearston.

Nearby Pearston dates back to the mid 1800's and is today one of the prime towns associated with hunting. The village is looking a little dog-eared these days with poverty and unemployment taking its toll on tourism. 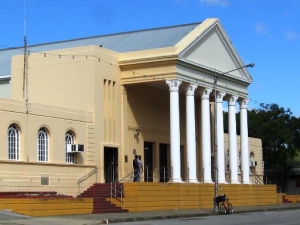 This pass is located on the tarred R63 between Somerset East and Pearston. Travelling eastwards, the pass starts approximately 20 km east of Pearston. Most of the R63 traverses fairly flat terrain just to the south of a long line of mountains. Bruintjieshoogte is the first significant change in altitude after leaving Graaff Reinet on this road. This region is rich in game farms as can be evidenced by the many kilometres of game fencing on either side of the road and game spotting is almost guaranteed - from the nimble springbok to the majestic kudu - the latter being able to effortlessly scale fences and is a major deterrent to night driving in the Eastern Cape.