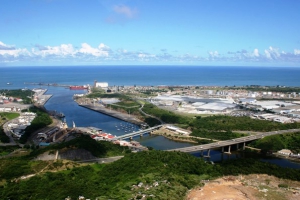 This inverted profile pass is situated near the east coast city of East London, and derives its name from the crossing of the Buffalo River, which empties into the harbour a few kilometres downstream. It forms a convenient shortcut from the western suburbs to the airport, as well as to the R72 coastal road which connects the city to Port Alfred and Port Elizabeth. East Londoners of the more mature variety will have fond memories of the infamous nightclub that used to be located next to the river at the bottom of the pass.

The lovely old tarred pass sweeps down into the densely wooded Buffalo River valley and crosses East London's major river via a bridge built in 1955. The road is tarred (although bumpy, potholed and patched these days) and presents a comfortable gradient of just 1:33, with some of the steeper sections at 1:11.

Piles of litter along the road-side spoil the drive and perhaps one of the city's councillors might read this page and do something about cleaning the pass up. It's one of East London's many attractions which has been allowed to degenerate. This pass is dangerous for cyclists and walkers as there are no safety shoulders plus this is a high crime area.