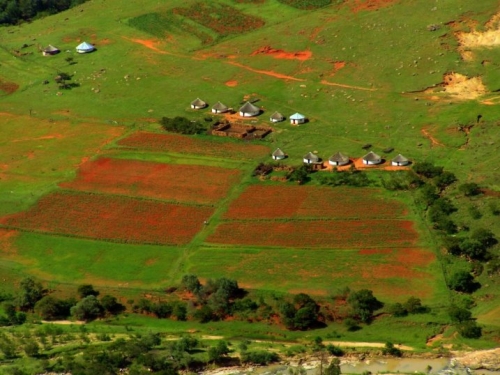 A small village off the pass - Photo: Mapio

Satansnek is a big pass by any standards, as it is almost 17 km long and has an altitude variance of over 500 metres. It traverses the spine of a mountain to connect the Eastern Cape Highlands with the lower valleys near Engcobo. Its most outstanding feature is the Xuka River Canyon, an astonishing gorge which cuts through the mountains and which is visible on the eastern side.

The road is tarred but is badly maintained, so there are numerous potholes. Other hazards include local traffic and livestock. The pass is sometimes closed in winter because of heavy snowfalls, and under these conditions it should be avoided altogether, or only tackled with extreme caution using a 4x4. It is not as well-known as some of the other famous passes in the area, but is worth taking a little bit of extra effort to get to, and should be on any serious pass-chaser’s bucket list.

Scroll down to view the map & video. This video consists entirely of Google Earth animations and serves to orienteer first time drivers of this pass. It is recommended to watch this video in HD. (Click on the "quality" button on the lower taskbar of the video screen and select 720HD.) Wait a few seconds for the video to display..... 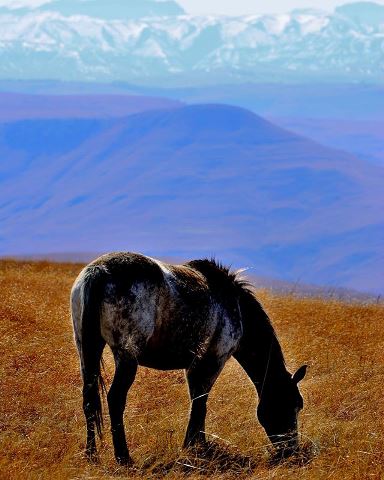 We have filmed the pass from north to south. The pass starts off on a straight flat section of road located near to the village of Nkungwini. After 300 metres, the road begins a gentle curve to the right, then starts to climb gradually up a long straight of 1.6 km. There are very few natural trees at this altitude, and the landscape is dominated by open rolling grasslands. The road curves very slightly to the left, then tops out over a rise and descends into a small dip. At the point where the road begins to curve back to the right, pull over onto the verge, so that you are safely off the road, then get out of your vehicle and walk 20 metres or so up onto the bank on your left-hand side.

From this vantage point, the full splendour of the Xuka River Canyon can be clearly seen. As measured on Google Earth, the gorge has an average depth of about 500 metres, varies in width from about 2 km to about 4.5 km, and is approximately 13 km long. This doesn’t put it quite in the same league of the Fish River Canyon in Namibia (550 metres deep, up to 27 km wide and 160 km long, making it the largest canyon in Africa) or of course the most well-known of them all, the Grand Canyon in the USA (1800 metres deep, up to 29 km wide and 446 km long), but it is very impressive nonetheless.

The definition of "the largest canyon in the world" is imprecise, because a canyon can be large by its depth, its length, or the total area of the canyon system. The deepest canyon in the world is the Indus Gorge in the Himalayas, which is 7120 metres deep at its maximum point, although this is sometimes disputed. In August 2013, the discovery of Greenland’s Grand Canyon was reported, based on the analysis of data from Operation IceBridge. It is located under an ice sheet and is believed to be about 750 km in length, which would make it the longest canyon in the world. Other notable examples of canyons in South Africa include the Blyde River Canyon in Mpumalanga and the Oribi Gorge in KwaZulu-Natal. 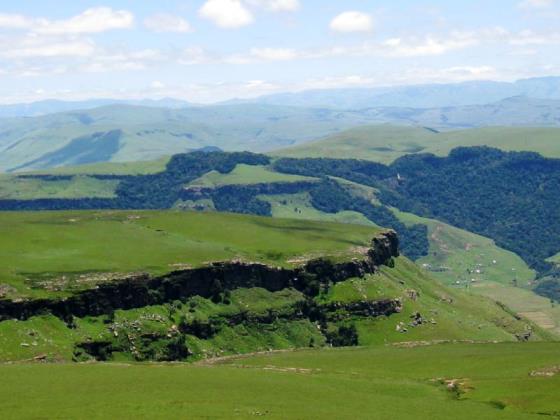 The road now continues to meander through some gentle bends, climbing continually up the mountain. There are some splendid views on the right-hand side, but the canyon is only sporadically visible on the left through the small scrub trees and the high banks which line the road. If you missed the first view point, try to find a safe spot to stop somewhere along this section, but safety railings guard the drop-off on the left and this will be quite difficult to do.

As you approach the summit of the pass, the terrain opens up, the trees dissipate, and the grasslands appear once more. The road follows a long and gentle curve to the left, then climbs sharply up to the high point of the route, which is reached at the 5.9 km mark. The descent is quite gradual at first, the road dropping down into a small dip, then curving to the left as it passes the entrance to the Ngcobo Quarry which is signposted on your right.

The road flattens out as it twists and turns along the spine of the mountain, hemmed in by small trees. A small hillock with a distinctive sharp profile appears on the skyline, marked by a solitary radio tower. There is a rough track leading to this tower; if you are feeling adventurous, and if you are driving an appropriate vehicle, a detour along this track could be well worthwhile, as this would probably offer up the best views of the canyon. 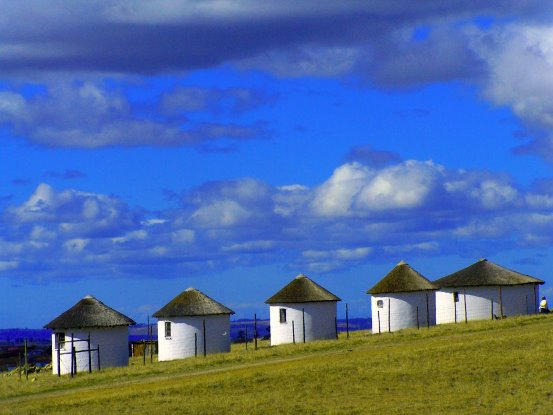 The road climbs briefly, then bends to the left as it skirts around a small hill. The descent continues at a very shallow gradient through a few more gentle corners, then the road bends to the right and begins to drop steeply down into the valley where Engcobo is located. A sharpish hairpin bend is followed by a short straight of 300 metres, and then by a 90-degree turn to the left. There is a steep cutting on the left, but beautiful views over the hills and valleys far below you are presented on the right at this point.

The road now follows a series of left and right-hand bends as it descends down the mountain. A few rural dwellings start to appear, and the density of the vegetation increases as altitude is lost. There are no significant corners anywhere through this section, but the bends are sharp enough to hide oncoming traffic from view, so be on the lookout for vehicles which might be overtaking slow-moving obstacles, or weaving about to avoid the numerous potholes which plague the road surface. 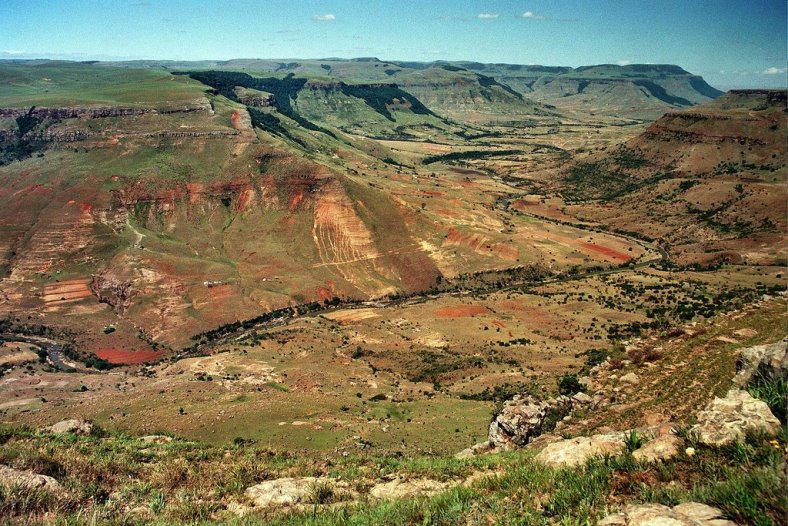 The town of Engcobo comes into view as you traverse past a sawmill marked with a tall and very long white-pillared fence on your right-hand side. The road straightens up for 600 metres, then curves through a long S-bend, first turning right and then left. The last corner is a gentle right-hander, which leads down to a bridge over a small stream which marks the end of the pass. This point is also the start of the town itself. Driving though the town is a nightmare, with crowded cars and taxis stopping wherever they please, so be patient and pay attention. At the R61 T-junction, turning right will take you towards Tsomo, and turning left will take you towards Mthatha. 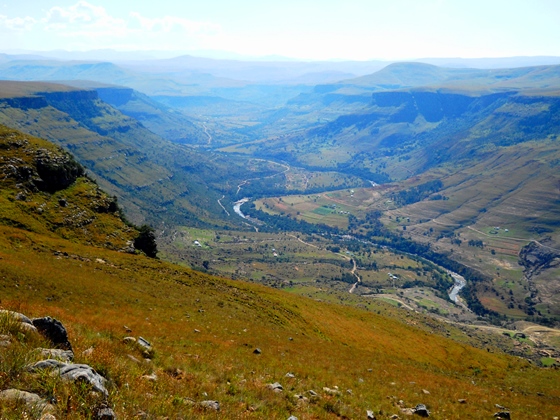 Another view of the canyon / Photo: Mike Leicester

Commanding exceptional views of the peaks of the southern Drakensberg, the northern part of the Eastern Cape affords a profusion of exciting locales and ventures. Scenic drives through quaint towns rich in history and remarkable mountain passes entice and enthral. Hot springs, traditional African villages, snow skiing options and well-known game reserves ensure that the adventure traveller will never be at a loss for something to do. Waters rich in trout allow for rewarding fishing, whilst climbing adventures and altitude training tantalise the more daring.

If you love beautiful scenery and awesome day trips coupled with some 4×4 challenges, then the mountains of the Eastern Cape Highlands are just for you. You will be in photographer’s heaven, literally and figuratively, as the topography of this area zooms up to lofty heights and plunges down again to deep, green valleys, with one stunning view following another.

Popularly known as "Wild Mountain Country", the destinations of Lady Grey, Barkly East, Rhodes, Elliot and Maclear are wonderful options for people who are keen to get away from the disruption and chaos of daily life. The village communities that inhabit the Highlands are a tad quirky, exceptionally friendly, and especially proud of where they live.  Planning a holiday in Wild Mountain Country provides a warm welcome to these communities and direct access to the myriad of outdoor activities on offer.

||Click to download: Satansnek Pass (Note - This is a .kmz file which can be opened in Google Earth and most GPS software systems)

Published in The Eastern Cape
Tagged under
More in this category: « Red Hill Pass (R352) Smuts Pass »
back to top