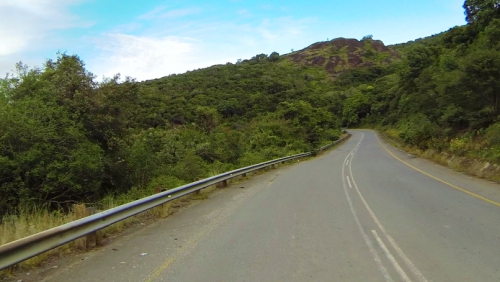 Exposed Dolerite can be seen on the southern descent - Photo: Trygve Roberts

The Red Hill Pass is located on the tarred R352 in the dense forests of the Amatola Mountains between Keiskammahoek and the main trunk route - the R63 which it joins about midway between Alice and King Williams Town. The pass is  a fairly safe one in fine weather with a gradient of 1:21,but it is subject to frequent misty conditions and heavy rainfall and of course, you can expect stray cattle on the roadway at any time of the day or night. There are a total of 23 bends, corners and curves to negotiate, three of them which are in excess of 90 degrees with very tight radii.

Getting there: Head east on the tarred R63 from the universtity town of Alice over Debe's Nek and just after the summit of Debe's nek, turn left onto the tarred R 352 at GPS S32.823567 E27.184489. It can of course also be accessed from King Williams Town to the east, in which case the turn would be to the right. The heading is now into the north. Remain on this road (R352) for 12 km to reach the southern start of the pass. 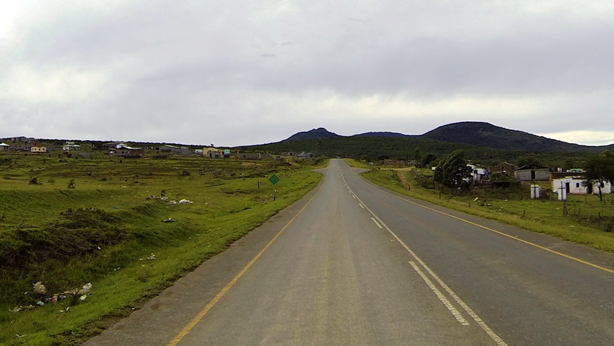 Northern start in Keiskammahoek. This village like most of the nearby towns is spoilt by litter / Photo: Trygve RobertsFor those wanting to drive this pass in the opposite direction (descending from north to south and the way we filmed it), head north out of Stutterheim on the N6 and take the left turn 3 km out of town onto the R352. This is  a fairly long drive of 36 km, but traverses beautiful scenery via the Gubu Dam and Dontsa Pass. Drive through the village of Keiskammahoek to arrive at the northern start of the pass.

The pass is 8.21 km long and has an altitude variance of 192 vertical meters and a summit height of 828m ASL. The vertical profile of this pass is the classic ascent-summit-descent type and is a well engineered, fairly safe pass in good weather and if speed limits are complied with. Cautionary: In misty conditions, like all mountain passes, safety can very quickly deteriorate into the dangerous category when visibility is reduced. When mist reduces visibility below 50m during daylight hours, switch your headlights onto bright, expand your following distance, do not attempt to overtake, switch on your rear fog lamps and switch on your emergency flashers. If conditions are really bad, rather pull right off the road and wait for conditions to clear. many fatal accidents occur in these conditions. be prepared.

We filmed the pass from north to south. It starts at its northern end at the village of Keiskammahoek which is well worth a stop to sample some of the local delicacies and also the 1930's architecture as well as the ruins of the once excellent Anglican teaching school of St. Matthews. 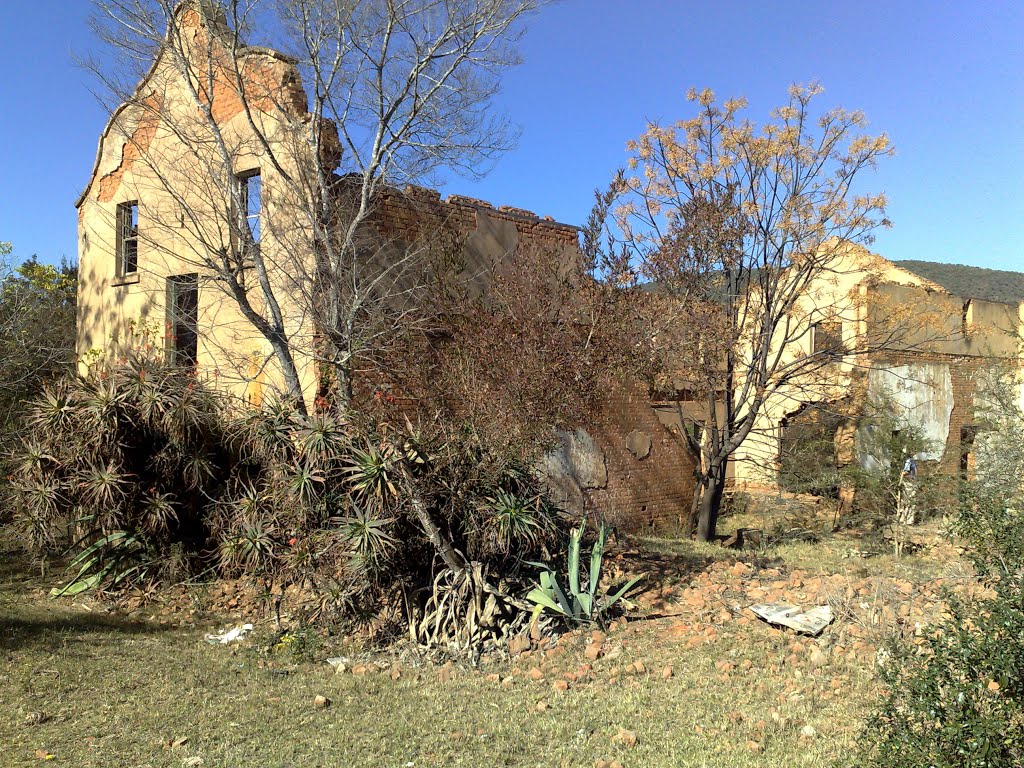 The ruins of St Matthews school / Photo: Gregg BurgerKeiskammahoek is located in the centre of four different biomes - Albany Thicket, Grasslands, Savannah and Afromontane forest. The town was once an important commercial centre for the timber and agricultural industries. The settlement of the area since the 1800s also led to the large scale exploitation and destruction of the natural environment. The timber industry has moved towards Stutterheim and the agricultural production has declined somewhat.

Just outside the town is St Matthew's High School, one of South Africa's historic schools. Founded as a mission school by the Bishop of Grahamstown John Armstrong in 1854, the school was once a particularly thriving educational centre, and the large parish church is a local landmark. A hospital and training facility for nurses was opened at the site in 1923 and the secondary school began in 1926. Like other church schools, the Anglican Church withdrew from direct involvement in the school as a result of the government legislation. Explore 1930's architecture in Keiskammahoek / Photo: Pierre JordaanThe state bought much of St Matthews’ land in 1970, and in 1976 the hospital was taken over by the Ciskei government. It closed ten years later, moving to Keiskammahoek, where it became known as the SS Gida Hospital. The high school continues as a state boarding school for girls (with male day students). A small clinic remains on the school site, and the ruins of many of the school's buildings are commonly evident.

Currently the economy of Keiskammahoek relies mainly on grants from the State. The population has been steadily declining and many villages are still without basic services such as water and sanitation.

However, the town still maintains some of the remnants of the historic past and there are a number of historic buildings to be found such as the Gilead Church. Nearby in the Amatolas you can do the Amatola Hiking Trail and take in some of the local history like the fabled Xhosa King Sandile's grave and cave. 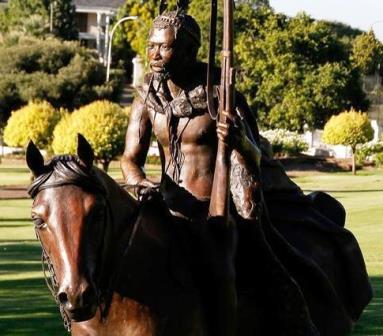 A sculpture of King Sandile on horseback by the artist Helena Vogelzang The nearby Sandile dam has also been named in his honour, which is featured fully in the fifth video on the Wolf River Pass. The forests are thick and timber harvesting is big business here. This is also seriously enjoyable mountain biking country. A few kilometres north of this pass, you will encounter the Dontsa Pass, which is featured elsewhere on this website.

There are a range of thoroughly enjoyable mountain passes in this region, mostof which are gravel and nearkly all of them can de driven in a normal sedan vehicle.

||Click to download: Red Hill Pass (Note - This is a .kmz file which can be opened in Google Earth and most GPS software systems)

Published in The Eastern Cape
Tagged under
More in this category: « Qacha's Nek Pass Satansnek Pass (R58) »
back to top