Olifantskop is a beautiful tarred pass located on the N10, a major arterial national road which bisects the country from the Namibian border in the north to Port Elizabeth in the south. Surprisingly, it is one of only three passes which reference elephants in their title, the other two being Olifantspoort near Queenstown and Olifantsnek near Rustenburg. Although the road is in a good condition, it is considered to be one of the most dangerous passes in South Africa for a number of reasons, including severe weather conditions, rockfalls, wild animals, multiple blind corners, steep gradients, and last but not least, the large number of heavy commercial vehicles which ply this route. 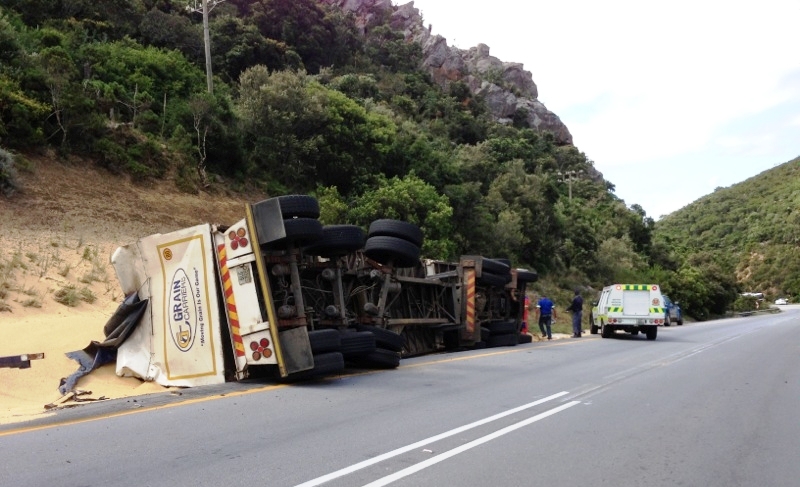 The pass has a high accident rate / Photo: Aeromed

There are a total of 34 corners, curves and bends on this pass, 15 on the northern side and 19 on the southern side. This averages out at one corner every 288 metres, so not much of this road is straight! Given these and the other hazards on this pass, it would be wise to slow down to the posted speed limit of 60 kph, and to enjoy the magnificent scenery all along this traverse.

We have filmed the pass from north to south. The pass is neatly bookmarked by prominent signs on both the northern and southern sides, so it is very easy to identify where it starts and ends. The approach from the Cookhouse side is long and fairly flat, so it comes as somewhat of a surprise to encounter the first corner of the pass, a 90-degree right-hand bend which curves sharply through a narrow ravine bounded by tall rock cliffs on either side. 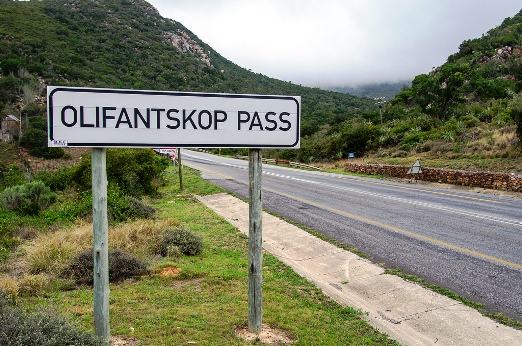 Sign at the northern side of the pass / Photo: Dan Harrison

Thick indigenous bush, which includes the acacia trees and aloes that are so typical of this area, encroaches all along the road as it gains altitude. The first corner immediately leads into a second 90-degree left-hander, followed by multiple shallower corners as the road zigzags its way slowly towards the summit of the mountain. The road splits into a double lane at regular intervals, so if you are stuck behind a slow-moving truck, apply some patience until you can get safely past.

Baboons and monkeys are a common sighting all along the pass, and there is always the potential of encountering a kudu in the road, especially at night. Game fencing does guard the road on the left-hand side, but these large antelope are capable of clearing a 2-metre-high obstacle from a standing start, so this is unlikely to stop them. The result of a collision with one of these animals is horrendous, so rather be safe than sorry. 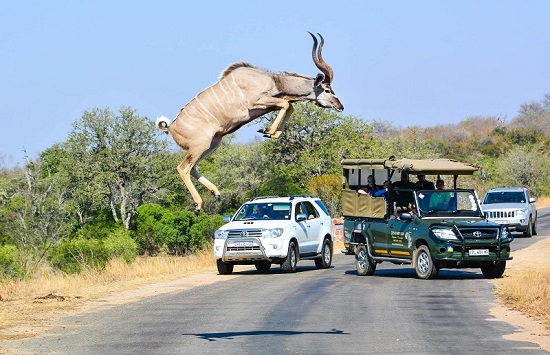 Photographic evidence of how high a kudu can jump / Photo: Arno Pietersen

At the 4.5 km mark the summit of the pass is reached, easily identifiable by a road leading off to some telecommunication towers on the right and by large laybys on either side of the road. Stop here for a break and to admire the magnificent views which are presented over the river valley to the north. It can be very windy at this exposed spot, so watch your footing if you have to cross over the roadway.

The descent starts off with a sharp 90-degree turn to the right, followed by a short straight of 100 metres and then by another 90-degree right-hander, forming a perfect hairpin bend when taken together. Steep cliffs, which have been gunited to prevent rockfalls, together with stone-packed retaining walls, characterise the terrain on the right-hand side, and a safety railing guards the huge drop-off on the left. Beautiful views towards Paterson on the southern side are visible sporadically through the thick bush, and on a clear day, it might even be possible to see the Indian Ocean far away in the distance.

The descent continues through another 17 corners as the road winds its way down the southern side of the Suurberg Mountains, in an effort to keep the gradient as shallow as is possible. This side of the pass is a lot more exposed to the prevailing easterly winds and there are no double lane sections, so make sure that you don’t stray into the oncoming traffic. The corners decrease in intensity as you approach the bottom of the pass, which is reached where the road dips down through a low point at the 9.8 km mark. 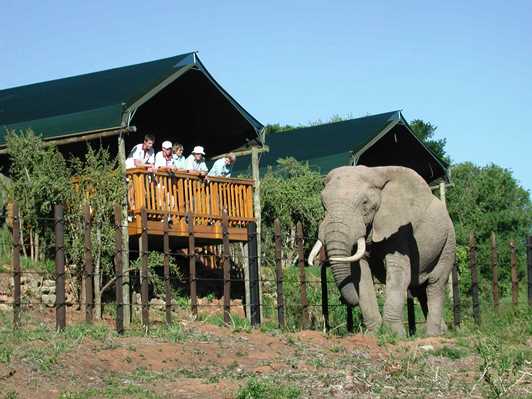 Olifantskop Pass is located very close to the eastern border of the Addo Elephant National Park. The original section of this huge game reserve was originally founded in 1931, due in part to the efforts of Sydney Skaife, in order to provide a sanctuary for the 11 remaining elephants in the area. The park has subsequently been expanded to include the Woody Cape Nature Reserve near Alexandria, and is currently the 3rd largest national park in the country, after Kruger and Kgalagadi.

Elephant numbers have decreased alarmingly in Africa, primarily due to hunting, habitat destruction and fragmentation. From an estimated 3,000,000 animals a few hundred years ago, the population has declined to about 450,000 individuals throughout the continent at the present time, with about 50% of the decrease occurring in the 20th century. As per the last accurate census in 2015, there were a total of 18,841 elephants in South Africa, approximately 50% of which are contained within the Kruger National Park. There are about 600 elephants in the Addo Elephant National Park.

Poaching of elephants for the ivory trade has reached epidemic proportions in many African countries, and since 2007 there has been at least a 30% decrease in the total population. The biggest culprits are Tanzania, which had a decline of 63%, followed by Mozambique, Botswana, Zimbabwe and Kenya. Due to a concerted conservation effort and a ban on culling, the number of elephants in South Africa actually increased by 6% from 2007 to 2015, and the number of poaching incidents over the last few years has been negligible. During the same period, Namibia managed to increase its elephant population by a commendable 44%. 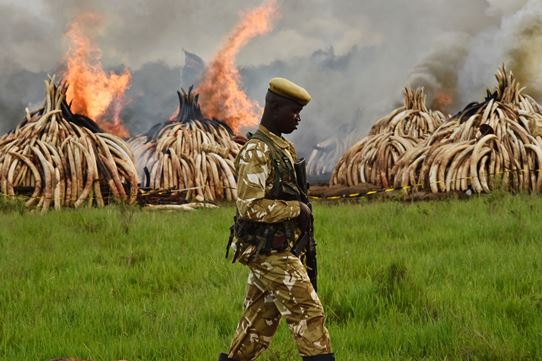 Most authorities believe that the issue needs to be resolved at the source of the consumption market. Towards the end of 2016, China confirmed that it would end the world’s largest ivory market, with key changes and a full domestic ivory sales ban. Between 800 and 900 cases of ivory smuggling are uncovered in mainland China each year, according to customs figures, and more than half of the legitimate ivory businesses are implicated in the illegal trade. The United States, the world's second largest consumer of illegal ivory after China, announced in June 2016 a near total ban on the trade of African elephant ivory, but with notable exemptions including antiques.

Protected habitat suitable for elephants represents only about 1.3% (30,000 square kilometres) of South Africa’s total landmass, and therefore careful management of these areas is absolutely imperative. Overpopulation can lead to a devastation of the environment, and control measures have to be implemented. These include birth control and the relocation of animals to less populated reserves, but culling still remains the most preferred and cost-effective method. This practice was banned in South Africa in 1995, but has since had to be reintroduced.

Because they need larger amounts of land than other sympatric terrestrial mammals, elephants are the first to be affected by human encroachment. In extreme cases, the animals may be confined to small islands of forest among human-dominated landscapes. Elephants cannot coexist with humans in agricultural areas due to their size and food requirements. They commonly trample and consume crops which contributes to conflicts with the locals, and both elephants and humans have died by the hundreds as a result. Mitigating these conflicts is important for conservation. One proposed solution is the provision of ‘urban corridors’ and transfrontier parks, which allow the animals access to key areas.

||Click to download: Olifantskop Pass (Note - This is a .kmz file which can be opened in Google Earth and most GPS software systems)

Published in The Eastern Cape
Tagged under
More in this category: « Nonesi's Nek Pass (R410) Otto Du Plessis Pass (DR 02862) »
back to top