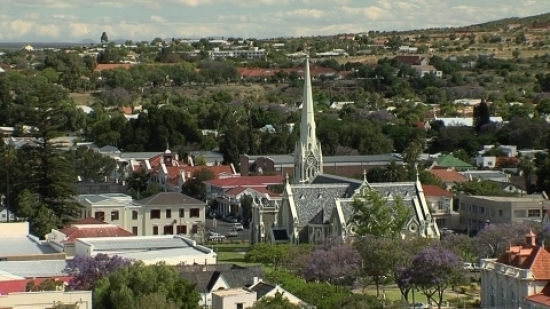 Graaff-Reinet - one of the oldest towns in the Cape - Photo: Wikimedia

Munniks Poort is a straight forward drive along the tarred N9 highway, just 3 km south-west of Graaff Reinet - with few technical surprises, other than beautiful vistas of the Great Karoo, the unique and distinctive vews of Spandau Kop and the world famous Valley of Desolation - all part of the Camdeboo National Park. The naming of the pass is probably after Dr. L.A.P.A. Munnik - a parliamentary minister in the 1970's.

Getting there: We filmed this pass from west to east. It is located on the N9 route. For those wanting to drive it in this direction, approach along the N9 from Aberdeen. From the opposite direction, drive through Graaff Reinet and follow the signs to Port Elizabeth on the N9.

The road rises gently along the western flank of Spandau Kop (featured in our cover photo) from an altitude of 763m ASL through just 73 vertical metres to summit at 805m ASL. Sweeping views of the Sundays River counter the majesty of the mountainous terrain to the West. Graaff Reinet has much to offer the visitor, with splendid, restored Victorian buildings under shady trees, peppered with restaurants and coffee shops. The town is steeped in history and it's not called the 'Jewel of the Karoo' without reason. Here you will find exactly the right accommodation option to suit your pocket - from back-packer style to 5 star luxury lodges. 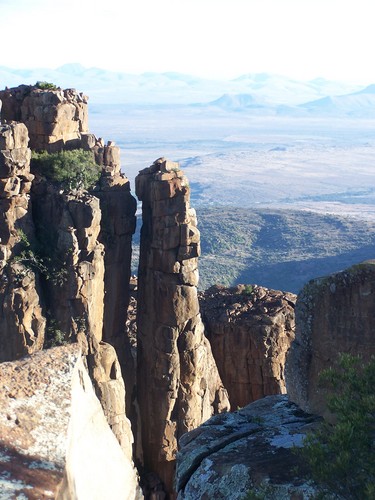 The spectacular Valley of Desolation - a must visit section of the Camdeboo National Park / Photo: RenetteThe Camdeboo Municipality has gone to great lengths to ensure visitors enjoy a quality experience. The world renowned Valley of Desolation is located just north of the town and falls under the jurisdiction of National Parks Board. Adjacent to the Sundays River you will find the Karoo Nature Reserve with a mind boggling array of succulents and exquisite bird life.

Keep a look out for the majestic Black Eagle near the top of the high ridges. The town is also home to some fine boarding schools with historical tradition. Fresh water angling can be enjoyed on the Nqweba Dam (previously known as the Van Rynevelds Dam) just north of the town . Close by, you can stop and visit the Andries Pretorius Memorial site.

For tourists heading towards Graaff Reinet, you will need to spend a few days in the town to take in all it has to offer. The Camdeboo National Park virtually surrounds the town. The town lies in the protection of a large horse shoe bend of the languid Sundays River.

Graaff Reinet boasts an astonishing 200 historical buildings, many of which are national monuments. Visit the old jail which was built in 1861; the Gunpowder Magazine, built in 1853; the Drostdy, built first in 1786, then rebuilt in 1804. Not be missed is the soaring Neo-Gothic architecture of the Dutch Reformed church located in the centre of the town.

In the late 1600s the area was inhabited by the Inqua Tribe of the Khoi people. They were nomadic cattle farmers, and their leader, Chief Hykon, is claimed to have been the richest among the Khoikhoi tribes. During the 1770s Dutch farmers began to settle in this area. There were skirmishes with the San (Bushmen) people. Under leadership of Koerikei they attacked the Dutch. Later there were constant skirmishes with the Xhosa people who also began to move into this area. 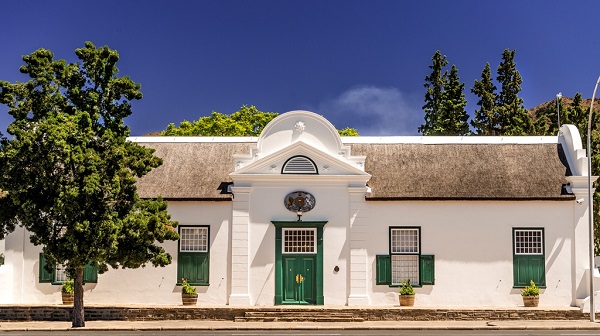 There are many historical buildings in Graaff Reinet / Photo Drosdty Hotel

This region received its first local administrator in 1785. By 1786 the first official building was built on the farm of Dirk Coetzee. This first residency (Drostdy) was replaced in 1804 by the building which is now the Drostdy Hotel. The town developed around the Drostdy. Graaff-Reinet is the fourth oldest Western town in South Africa, after Cape Town, Stellenbosch and Swellendam. This is due to it being the seat of the 4th district proclaimed by the VOC Dutch East India Company.

Cornelis Jacob van de Graaff was married to Hester Cornelia Reynet. He was Governor of the Cape of Good Hope from 1784/1785 to 1791. The town was named after him, and his wife's maiden name. She was of noble origin. Spelling was not consistent in those days, and her surname was variously spelt as Raynet and Reynet, and more modernly as Reinet.

In 1795 the citizens of Graaff-Reinet, under leadership of Marthinus Prinsloo, proclaimed an autonomous republic, which did not last long as the British conquered the Cape of Good Hope and took over administration. Twenty of the "rebels" were found guilty by the British, several sentenced to death and the remainder banished. However, after Napoleon's war, the Cape of Good Hope was given back to the Dutch, and the prisoners were released in March 1803. Andries Stockenström (1792-1864) was Magistrate of Graaff-Reinet, and later lieutenant governor of British Kaffraria (1836 - 1838).

||Click to download: Munniks Poort (Note - This is a .kmz file which can be opened in Google Earth and most GPS software systems)

Published in The Eastern Cape
Tagged under
More in this category: « Moordenaarsnek (R56) Naudesberg Pass (N9) »
back to top