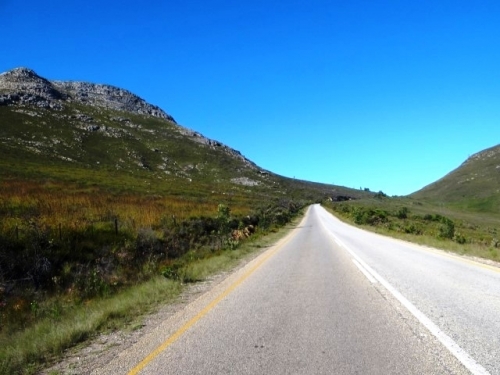 Near the summit - Photo: Tracks4Africa

The Kareedouw Pass is a modern, well engineered pass which provides a short cut between the N2 near the seaside hamlet of Skuitbaai and the small town of Kareedouw on the R62 in the Langkloof. There are only 7 bends along this pass and all of them are minor.

The pass offers sweeping views of the Tsitsikamma mountains to the left (west) with the green valley on the right dotted with dams and a small triangular shaped forest near the summit area. There are no obvious dangers on this road, other than heavy rainfall and mist which occurs from time to time.

The small town of Kareedouw after which the pass is named lies at the northern end of the pass. The name is of Khoi origin and means "Path of the Karee trees"

Scroll down to view the map & video. This video consists entirely of Google Earth animations and serves to orienteer first time drivers of this pass. It is recommended to watch this video in HD. (Click on the "quality" button on the lower taskbar of the video screen and select 720HD.) Wait a few seconds for the video to display.....

Getting there: To approach from the south (the direction we have produced this pass), turn north off the N2 at GPS S33.998293 E24.235959 about midway between Humansdorp (in the east) and Storms River (in the west). head north on this road (the R402) for 2,6 km to arrive at the southern start of the pass.

For those approaching from the north, head west out of Kareedouw on the R62 and take the first tar road to the left on the outskirts of the town at GPS S33.949873 E24.281639. This intersection marks the northern start of the pass.

Despite the short distance of 4,5 kms, the views over the pastoral landscape of the Eastern Cape gradually give way to the rugged mountains of the Tsitsikama range, as the road heads steadily for a natural neck between two prominent conical peaks. The summit cuts through a section of the Tenax Nature Reserve. 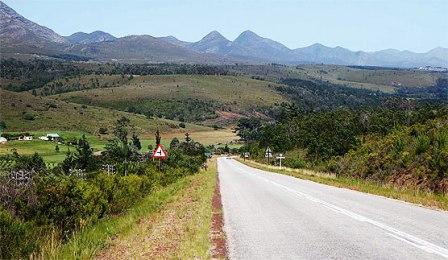 Scenery near the town of Kareedouw / Photo courtesy of Route62-info.co.zaThis is a safe, good quality tarred road with a good safety track record and has been a financial boon to local farmers who are able to drastically reduce their travelling time to towns like Plettenberg Bay and Knysna.

From the southern start the small stream that flows to the east of the pass, has three dams along its length, with the highest one (the Oubos Dam) making an appearance close to the starting point.

The ascent is evenly graded at around 1:14 as the road follows the side of the thickly wooded slope on the left via a long sweeping right hand bend followed by an imperceptible S-curve before reaching the 487m high summit point at the 2,1 km point. The summit is at a natural neck between unnamed peaks of 819m to the west and 744m to the east, both part of the Kareedouwberge.

As the summit is crested a new view reveals itself of forests and open grasslands as the road descends at an easier gradient via a soft S-curve, first to the left, then to the right, before dropping down to intersect withe the R62 on the outskirts of Kareedouw. Turn right to enter the village.

Kareedouw is a sleepy country village perhaps best known for the production of high quality yellowwood and stinkwood furniture. The main manufacturer (Rensilfier) have a showroom on the southern side of the main road as one enters the village from the west. The town is worth exploring and several guesthouses and farm B&B's will welcome you with typical country style warm hospitality. The town was established around 1750.

Kareedouw is also the springboard to a number of wonderful gravel passes as well as the well known 4x4 route called the Baviaans-Kouga 4x4. Other passes worth exploring in the area are the Kouga-Kleinrivier Pass, Brakkloof Pass, Kouga River Pass, Meidenek and Moordenaarskloof Pass.

||Click to download: Kareedouw Pass (Note - This is a .kmz file which can be opened in Google Earth and most GPS software systems)

Published in The Eastern Cape
Tagged under
More in this category: « Jouberts Pass (P3224) Katberg Pass (R351) »
back to top