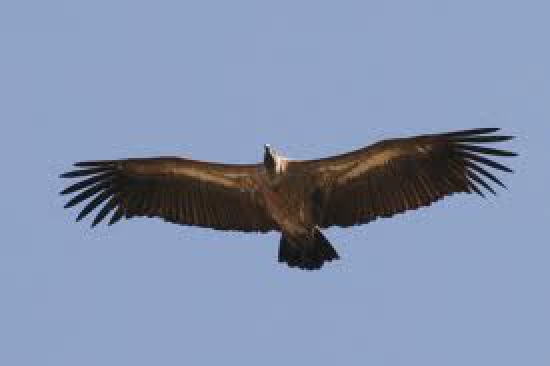 This high altitude pass can be found after summiting the Katberg Pass. It starts at 1623m ASL and summits at 1713m before dropping through through a series of switchbacks through the Winterberg Mountains to the next plateau of farms. We recommend a high clearance 4WD vehicle for this pass. It connects the summit of the Katberg Pass with the towns of Sada, Whittlesea and Queenstown further to the north.

The road (or rather the track) is mostly badly rutted with some deep washaways and large stones to get over. After rain, the summit area can be very slippery with large pools of muddy water over the road, which have to be traversed. Don't attempt this road without a backup vehicle and recovery equipment. Also make sure you have Tracks4Africa loaded on your GPS otherwise you will more than likely get lost. This is one of those roads very much less travelled. 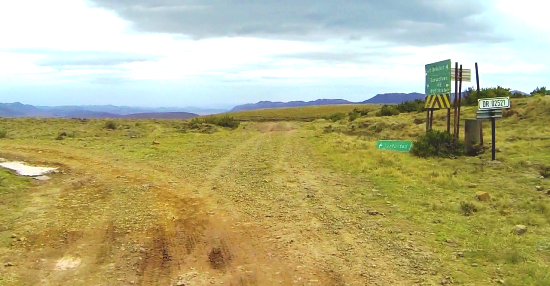 The second option is to approach via Blinkwater Pass and Brown's Vale. This is a long and winding (but exceptionally scenic) route with several intersections and makes for a fantastic circular drive including several major gravel passes. Start in Fort Beaufort and head north on the tarred R67 for 12,5 km. Turn left onto a gravel road at Blinkwater (read up on the Blinkwater Pass using this link) at GPS S32.704845 E26.587937. Drive up the Blinkwater Pass and turn right at the summit T-Junction towards Brown's Vale at GPS S32.577436 E26.517496. Drive northwards for 12 km and keep right at a fork at GPS S32.486722 E26.523608. Follow this road eastwards for 17 km to arrive at a T-Junction at the summit and northern end of the Katberg Pass, where you must turn left (north). 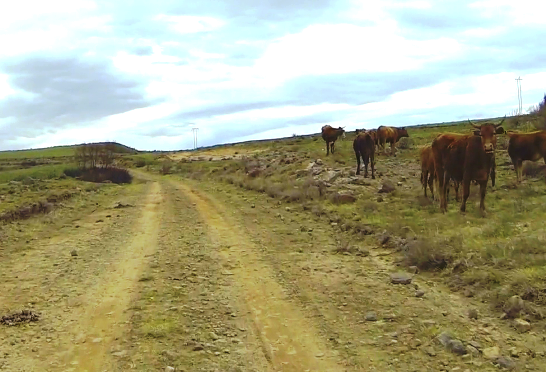 In the Eastern cape always expect livestock on the roads / Photo: Trygve Roberts
The road is designated the R351 and connects the settlement of Katberg with it's well known hotel and golf course with the farming region of Sada and Whittlesea. (Weird hat it's nowhere near the sea!). After descending the pass, the road heads in a north easterly direction towards the Bushmans Krantz Dam. The pass derives its name from the ferocious anabatic winds which power up the steep cliff faces, accelerating violently over the ridge where the road runs. Cyclists, light cars and unladen commercial vehicles are prone to being blown over.

There are two alternative gravel roads which join the Devils Bellows Pass near the summit, which could provide an easier alternative than ascending the Katberg Pass. We have not driven either of those routes, so cannot comment on their condition or suitability. 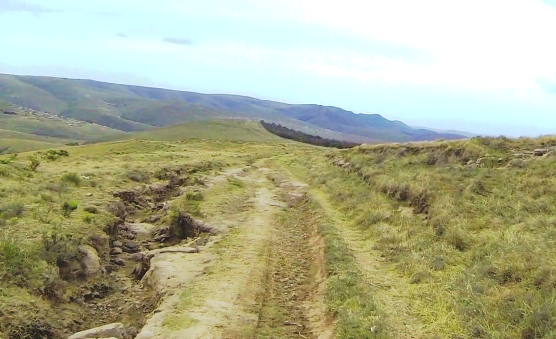 The first option is described in detail in the directions (Fort Beaufort via Blinkwater and Brown's Vale). The second option joins the R351 about 2,5 km further north also on the summit ridge. This road leads all the way to the Thrift Dam (a popular trout fishing venue) and involves a number of complex routing options. We do not recommend this approach as the distances are big and it's very easy to get lost. If you do want to use this approach, you should have a good GPS loaded with Tracks4Africa and pre-plan your route.

The Devils Bellows Pass itself can get very muddy along the plateau as can be seen in the video footage - which was filmed during October before the rainy season, so things could get tricky without 4WD.

Although the track is very rough in places, the gradients and corners are much milder than the Katberg Pass. Despite this, the going is slow and drivers need to be alert not to get stuck in one of the deep ruts, as well as having to keep clear of the larger rocks that litter the road. If there's lots of mud around, you will need some additional mementum (speed) to get through the muddy sections. Never drive fast into muddy pools where you can't see the bottom. There could be submerged objects which could damage your tyres or your vehicle's undercarriage. 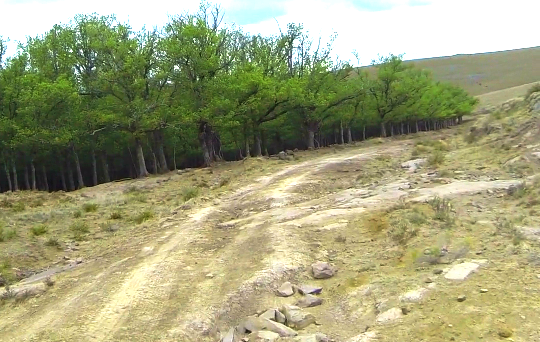 The plantation at the bottom of the pass presents a serious obstacle / Photo: Trygve Roberts
Much of the upper section of the pass involves a fairly level meander all along the top of the cliffs, where most of the vegetation is open grassland. The views to the left and right are amazing and especially if you make the effort to walk a little further towards the downslopes. If you happen to be driving this pass on one of those famous windy days and the anabatic winds are howling up the mountain, you will quickly understand why this pass is called the Devil's Bellows.

Expect to find livestock on the road at any point, but in general you will be driving at speeds lower than 30 kph, so avoiding livestock should not be a problem. Don't drive this pass at night or in impending bad weather. You might not see another vehicle for many days - even weeks! If you're driving alone, prepare your GPS with waypoints of destinations and places of safety and assistance (like police stations and farms). So if you do get stuck and need to do a long walk-out, at least you will know how to reach the nearest point of safety. It is not recommended driving this pass in one vehicle. 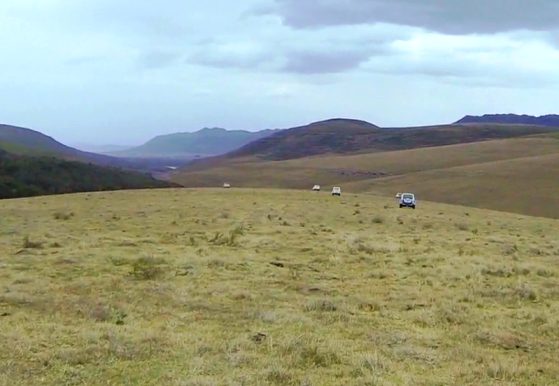 Bushwacking past the fallen forest / Photo: Trygve Roberts
After several easy S curves the track descends the mountain and soon a dense forest appears directly ahead. Here the road follows the right hand (eastern) flank of a dense plantation of pinoak trees. A ferocious wind storm upended many of the trees next to the road, which fell over the road, making about 1,5 km of the descent completely impassable in any vehicle. Careful observation (and watching the video) will show a specific spot where one can exit the track and parallel the forest down a long grassy slope. Near the bottom of the slope, there is a sudden drop off and there are several large rocks which will make your journey interesting. Get out of your vehicle here and recce a suitable route through these rocks.

Preferably have your passenger guide you to prevent damage to your vehicle. There is one single place where you can rejoin the road adjacent to the northern edge of the forest. This short piece of about 15 meters runs at an oblique angle back onto the road. Don't charge up here as your vehicle could roll. Take it nice and slow with just enough momentum to get over the gravel ridge. 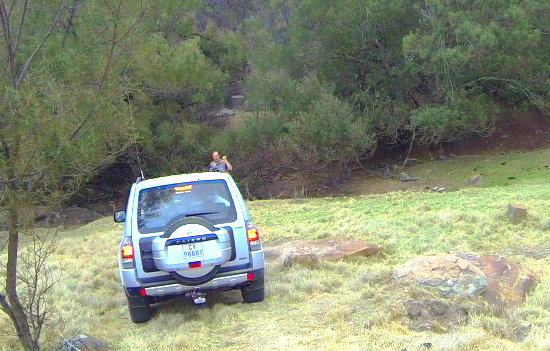 A 4x4 being guided through a rocky section / Photo: Trygve Roberts

Judging by the state of decay of the fallen trees, they have been lying there for many years. It seems that the local authority have little intention of clearing the trees. Before you go bushwacking, rather take the time and effort to walk your proposed route first, so that you don't find any nasty surprises. It's about 1,5 km in length.

Other than this last obstacle on the route it is technically not a very difficult pass to drive and for those that have ascended via the Katberg Pass, this one will feel like something of an anti-climax. The views and mountainous scenery are however, worth every meter travelled. From the bottom of the pass on the R351, the road continues northwards passing close by the Bushmans Krantz dam on the right and later past the Oxkraal Dam on the left. It then swings to the right towards Sada and Whittlesea. Here you can take the R67 (tar) which will get you to Queenstown - a good spot to refuel and refresh.

||Click to download: Devils Bellows Pass (Note - This is a .kmz file which can be opened in Google Earth and most GPS software systems)

Published in The Eastern Cape
Tagged under
More in this category: « De Beer's Pass Dontsa Pass (R352) »
back to top