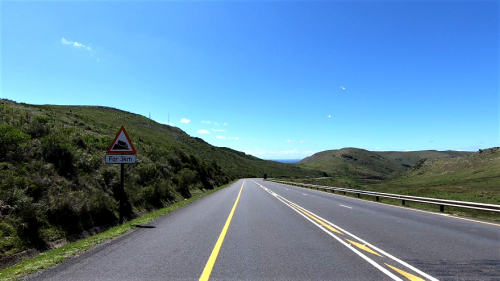 Northern side of the poort - Photo: Trygve Roberts/MPSA

Howison's Poort (also spelled as Howieson's Poort) is a well known cave like rock shelter halfway up a cliff in the poort. It has considerable archeological signiificance. The 8.8 km long poort bisects the mountains through dense forests and plantations just to the south-west of Grahamstown on the N2 national road.

The poort has more pass like statistics and descends a respectable 300m producing an average gradient of 1:29. The road is nicely engineered with correctly banked corners and double lanes for overtaking along most of its length. There are only 10 bends along the poort, all of them insignificant in terms of speed reduction, except for the first one right near the summit which has a turning angle of 150 degrees and it's quite sharp as well.

Grahamstown has an astonishing amount of 1820 Settler history and is of course, the seat of higher learning in the area, at the well known Rhodes University.

Getting there: To approach from the north-east (as we have filmed it) depart Grahamstown anywhere along the N2 heading towards Port Elizabeth. The poort starts at it's highest point just after passing the 1820 Settlers Monument.

To approach from the south-west, head east along the N2 from Port Elizabeth for 106 km to arrive at the western start.

Technical: The road is an excellent condition and quite safe for all vehicles. However, the area is subject to dense mountain mists on a regular basis, which can quickly turn this excellent road into a death trap. It's best avoided altogether in mist if at all possible. On a previous failed attempt to film this poort, we were appaled at how reckless some drivers were in conditions where visibility was down to 30m and less. Minibus taxis and courier vehicles were passing the long string of cars crawling along at a safe speed, doing well over 120 kph, without lights on and over double barrier lines. This was bordering on suicidal behaviour.

In heavy mist conditions during daylight hours, put your headlights on bright. Activate front and rear fog lamps if your vehicle has them; do not overtake at all; maintain a safe following distance keeping the vehicle in front of you just visible. As an added precaution (we know its against the rules) put your hazards on.

From the northern start, the road sweeps to the left in a sharp bend of 150 degrees with a tight radius and begins descending immediately. This is also the only sharp bend. The road then heads into the south east and enters an easy right hand bend, which brings the direction directly into the south and begins a long straight descent at a gradient of 1:16.

In the middle of this straight, the Stone Crescent Hotel appears on the left hand side. The buildings face the rock face of the Howison’s Poort mountain range. The hotel gets its name from a combination of the prehistoric stone tools that peppered the area and the rock crescents that face it. 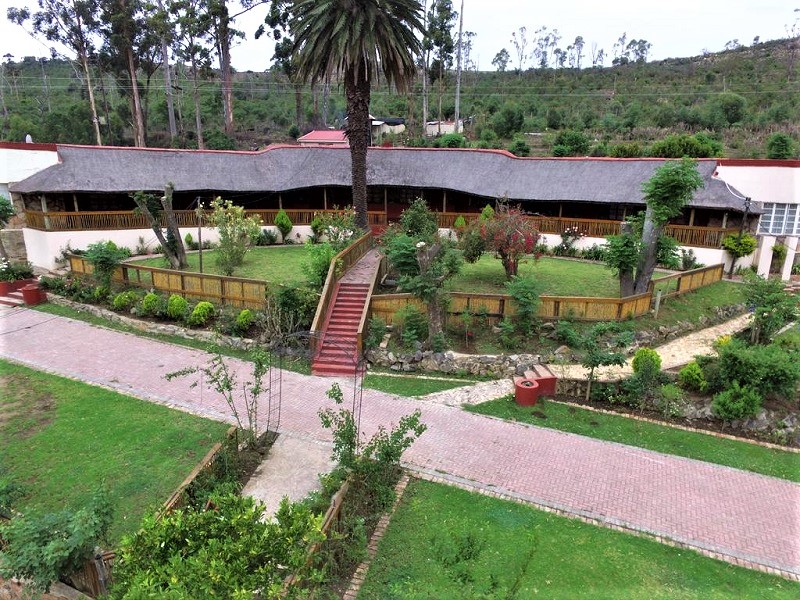 Historian consultant at Makana Tourism Brian Jackson, says the hotel appears to have been built between the 20s and 30s owing to its “Art Deco-ish” architectural style. It was built by Eli Cohen and remained in the Cohen family for some time.

The hotel carried on the tradition of being a popular place to visit for many years. “It used to be quite a high profile hotel at one stage with a really good restaurant and it became a popular drinking hole too,” he says. He also recalls how popular the hotel became among students in the 80s. But fatal car accidents along the road to the hotel made the appeal of this hotspot dwindle.

After the hotel and right at the end of the long straight, the road sweeps to the left through an easy bend of 20 degrees, where two ridges compress the road and river in towards a narrow kloof. This is a particularly attractive section of the poort, so slow down and enjoy the views.

Once through this narrow gap, the terrain opens up and a dam can be seen on the left which is part of the Thomas Baines Nature Reserve. Note the spelling does not refer to SA's most famous road engineer, but to the painter. The road makes a final bend to the right where the poort ends at the 8.8 km mark at an altitude of 376m ASL at the intersection to Kenton-on-Sea.

Howieson's Poort Shelter is a small rock shelter in South Africa containing the archaeological site from which the Howiesons Poort period in the Middle Stone Age gets its name. This period lasted around 5,000 years, between roughly 65,800 BP and 59,500 BP. This period is important as it, together with the Stillbay period 7,000 years earlier, provides the first evidence of human symbolism and technological skills that were later to appear in the Upper Paleolithic. 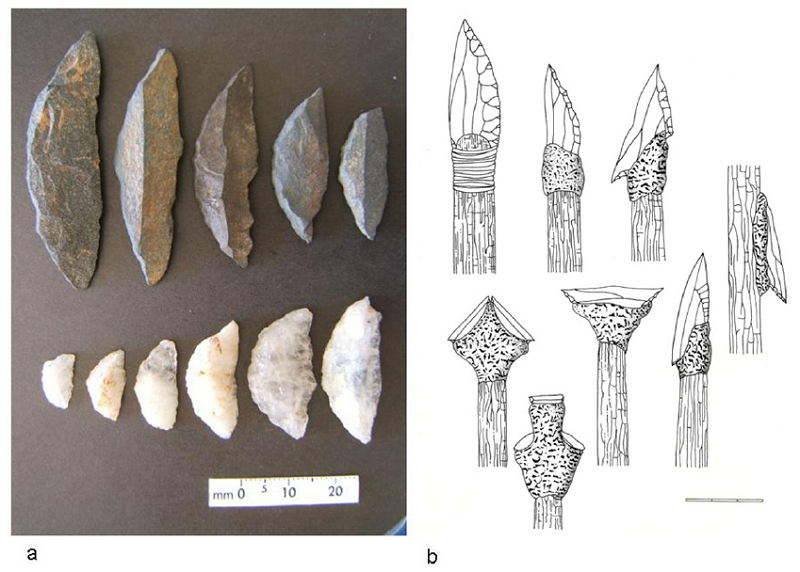 The poort was named after a "Mr Howison" but it was misspelt by Stapleton and Hewitt as Howieson and their error has been used ever since for the stone tool industry named after it. The rock shelter occurs in a hill on the north side of the Howison's Poort containing the main road into Grahamstown from Port Elizabeth.The cave is halfway up a cliff and is 7 m deep and 5.5 m  wide at the mouth, with a large Real Yellowwood tree growing in the deposit and "bent horizontal with the floor to allow its branches to spread into the open at the mouth of the shelter". The original Howisons Poort period remains were covered very slowly due to the cave's position halfway up the cliff and to wind clearance. 20,000 years ago, however, a rock fall acted to protect the deposits near the front from wind erosion.

||Click to download: Howisons Poort (Note - This is a .kmz file which can be opened in Google earth and most GPS software systems)

Published in The Eastern Cape
Tagged under
More in this category: « Great Fish River Pass (N2) Wepenersnek (D649) »
back to top