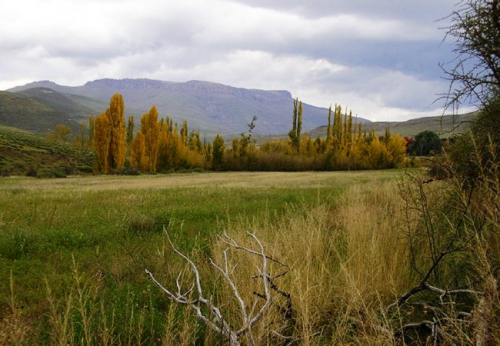 This long gravel pass is located on the R344 - a well maintained gravel road that connects Tarkastad with Adelaide in the Eastern Cape. It's well above average length at 10,4 km and displays an altitude variance of 463m, which converts into a reasonable average gradient of 1:22, but the road never exceeds a gradient of 1:10, which makes this pass suitable for all vehicles.

The pass descends down the Winterberg range and traverses prime game farming sectors, so always be on the lookout for game and more importantly kudu at dusk and dawn, as  they can comfortably clear a 2m fence from a standing start and have caused many accidents all over South Africa - many of them fatal.

Getting there: To approach from the north (as we have produced it) head south-east from Tarkastad along Murray Street, which becomes the R344. Remain on this road for 58 km to reach the northern start of the pass.

To approach from the south, head north-west from Adelaide along Stringfellow Street, which becomes the R344 for 1,5 km and turn left at GPS S32.695061 E26.293247 which is a gravel road which retains the R344 tag. Now drive north for 32 km, ignoring all side roads to arrive at the southern start and foot of the pass. 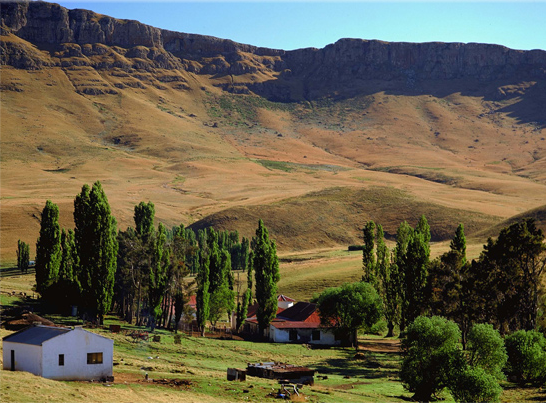 Pass Description:  The pass traverses four farms which include from north to south:  Valsefontein,The Orchard, Austry and Paardekloof.

Starting at the northern end, the road begins descending very gently along a high plateau ridge for 2 km. Lying to the right (west) and out of sight from the road) is a deeply incised ravine, which will become visible a little further along the descent.

At the 2,1 km point, there's an easy 30 degree bend to the right, which marks the point from where the gradients begin getting steeper at 1:16. A short straight of 400m is followed by a much sharper 90 degree bend to the left, from where the gradients get as steep as 1:10. As this left hand bend is entered the views open up over a large forested basin on the right which is the Braambos, after which this pass is named.

The road now heads into the south for 500m and enters a 110 right hand bend at the 3,3 km mark. As you exit this bend, you will get a perfect view away to the right of the ravine described earlier. For the next kilometre the views remain picture perfect to the right, with cuttings and steep slopes on the left.

A very tightly radiused corner comes up at the 4,3 km point. This right hand bend has an arc of 90 degrees but it is very sharp. Speed needs to be lowered to 30 kph to negotiate this corner safely. Once through this bend, the ehading is almost directly north for 200m, whereafter the road swings back into the west via a 90 degree bend, but the arc is very easy, compared with the previous bend. 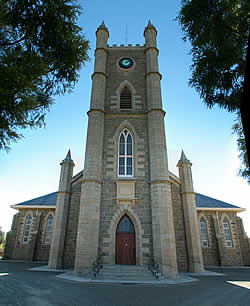 Visit the beautiful church in Adelaide / Photo: Google ImagesFrom this point, the gradients progressively become easier as a long straight of 1,8 km is followed by the last big bend at the 6,7 km mark, which is a 40 degree left hand bend, but the arc is gentle, not requiring any reduction in speed. Below the green orchards in the valley become clearly visible, as the road tracks the eastern side of the valley.

The last three bends are fairly easy and don't exceed 30 degrees. The third last one appears at the 8,9 km point which is a right hander, followed quickly by a left hander as the road tracks the river course through the last past of the valley, before the pass ends at a river crossing at the 10,4 km mark at an altitude of 893m.

Continue for 34 km to reach Adelaide all the while remaining on the R344.

History of Adelaide: The modern day area of Adelaide was first inhabited by Bushmen (estimated around 1530 to 1760), but in the late 18th and 19th century the Xhosa and white settlers arrived. The Bushmen were displaced and are no longer found in the area.

Adelaide's origins date back to 1835 when a British officer named Captain Alexander Boswell Armstrong (1787–1862) established a military encampment which he named Fort Adelaide after the wife of King William IV. Despite the earlier English settlers, who were part of the 1820 Settlers, later on a large number of both Scottish and Afrikaans people soon immigrated here too. The Scottish were also the first to erect a church in the local area.

Adelaide is an important centre of wool and sheep farming. Beef, mutton, venison and citrus fruit are also important products. The specialised abbatoir for venison (farm-hunted game meat) operating from central town provides much needed employment to the local residents.

||Click to download: Braambos Pass (Note - This is a .kmz file which can be opened in Google earth and most GPS software systems)

Published in The Eastern Cape
Tagged under
More in this category: « Dewaalskloof Pass Erasmuskloof Pass »
back to top