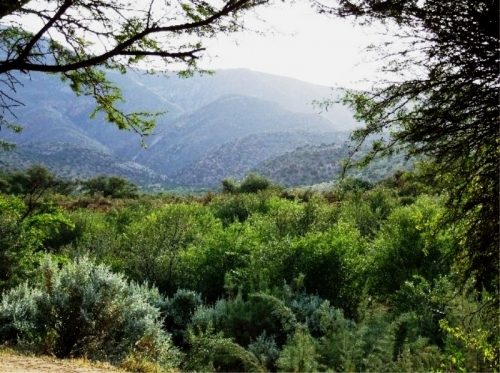 This is one of many poorts in the mountainous region between Steytlerville and Willowmore in the Eastern Cape. It runs along the NW/SE axis and is unusual in that it is much wider than most poorts in South Africa at between 1,2 and 1,4 km. Topographically it looks much more like a valley than a poort. In addition it doesn't display the one key element of all poorts in that there is no river bisecting it.

It's an official poort, so it gets indexed here, regardless of how small or insignificant it might appear. It's 4,5 km long and displays an altitude variance of 68m producing an average gradient of 1:66 with the steepest section just east of the summit, measuring in at 1;14.

This is a provisional video consisting entirely of Google Earth 3D animations, designed to orienteer first time drivers with the salient features of the pass. Scroll down to view the map & video. It is recommended to watch this video in HD. (Click on the "quality" button on the lower taskbar of the video screen and select 720HD.) Wait a few seconds for the video to display.....

FULL SCREEN MODE: Click PLAY, then pass your mouse cursor of the bottom right hand corner of your video screen. The outline of a rectangle will appear. Clicking on it will toggle full screen mode. Press the ESC key to return to the original format.

Note: Google earth software reads the actual topography and ignores roads, cuttings, tunnels, bridges and excavations. The vertical profile animation can generate a number of parallax errors, so the profile is only a general guide as what to expect in terms of gradients, distances and elevation. The graph may produce some improbable and impossibly sharp spikes, which should be ignored.

Getting there: To approach from the NW (as we have produced it) use the hyperlinks provided and first drive Sandkraalpoort off the R329, then Medenpoort. When you reach the T-junction towards the eatsern end of Medenpoort at GPS S33.223212 E24.106836, turn right, which marks the north-western starting point of Meidepoort.

To approach from the south, head west out of Steytlerville on a gravel road which starts at GPS S33.327197 E24.339930. Remain on this road for 25 km heading generally west to arrive at the south-eastern start of Meidepoort.

Poort Description: Starting in the north-east, the road initially bends to the left through an easy and wide bend of 70 degrees whilst ascending at a very slight gradient. This big bend eases into another gentle right hand bend, after which the road is more or less straight until the end.

The highest point is reached at the 2,3 km mark, but there is nothing significant or dramatic to make you realise you are at the highest point, as the road has only climbed 68m from the start.

The descent is arrow straight and last for 2,2 km. At the 3,4 km point, there is a slight dip, after which the road climbs briefly, before completing the descent towards the 4,5 km point. On the left of the road, about 1,6 km to the north-east is the Loeloe Dam, which has a concrete arched wall, but it's difficult to access as it lies within the confines of a steep sided kloof. The river which flows northwards is a tributary of the dominant river, the Grootrivier.

Once you've reached the end of the poort, remain on this gravel road, heading eastwards for 25 km to arrive in Steytlerville.

||Click to download: Meidepoort (Note - This is a .kmz file which can be opened in Google earth and most GPS software systems)

Published in The Eastern Cape
Tagged under
More in this category: « Kranskop Poort Kaprivier Pass »
back to top