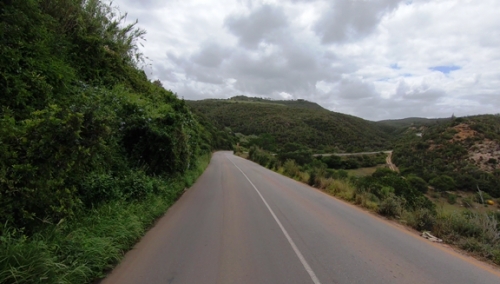 Near the western end of the pass - Photo: Trygve Roberts

This easy tarred pass sweeps up the northern flank of a double horseshoe bend in the Gamtoos River about midway between the two citrus farming towns of Patensie and Hankey. The pass is 7,9 km long and has an altitude variance of 155m converting into an average gradient of 1:51 with the steepest sections measuring in at 1:14

The pass traverses attractive scenery of mountains and the Shumba Game Farm occupies most of the western side of the pass. Once over the summit and approaching the outskirts of Hankey, the sides of the road have lot of litter which detracts somewhat from the natural scenic beauty of the area. This is especially obvious if you have just completed the pristine Baviaanskloof.

The pass is suitable for all vehicles but it should be noted that there are no safety shoulders - not even a gravel shoulder. It makes this road very dangerous for cyclists due to the large trucks that frequent this pass.

Scroll down to view the map & video. It is recommended to watch this video in HD. (Click on the "quality" button on the lower taskbar of the video screen and select 1080 HD.) Wait a few seconds for the video to display.....

Getting there: To approach from the west (in the direction we have filmed it), head east along the tarred R331 out of Patensie towards Hankey. The western start of the pass is reached after 4 km.

For those approaching from the east, head north-east out of Hankey on the tarred R331. The pass starts at the last stop-street in the Centerton township. 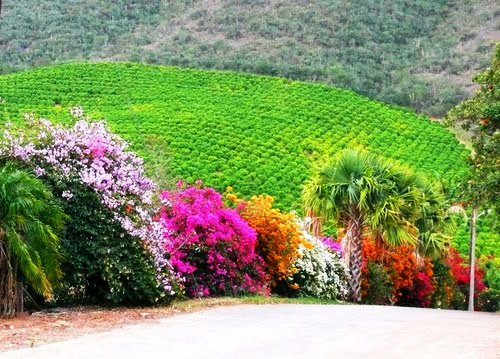 Colourful gardens along the road to the pass on the Patensie side / Photo: H.J. van Zyl

The pass starts at its western side adjacent to a large set of buildings with a security gate, which is the local prison. The road descends immediately and within 200m curves away to the left and then curves to the right and reaches a dip at the 550m mark, where the real ascent begins. The gradients along this climb are exceptionally even at 1:14. Whoever designed this pass, knew his stuff.

Ahead and to the right, the Gamtoos river curves through a double oxbow with the dominant farms of Vensterhoek, Spes Bona and Rooivlakte occupying the fertile banks. On the left the mountainside is densely vegetated and the lovely Shumba Manor occupies a solitary koppie immediately to the left. The Shumba Game Park is well established and attracts a lot of international tourists to the area.

After a set of gentle double S-curves the road straightens out and climbs steadily into the east. At the 2,3 km mark, the road enters a gentle left hand bend, then curves back to the right and begins a double apex right hand bend of 160 degrees. It's not as bad as what it sounds, as the rate of curvature is actually very easy. Rows of neat citrus orchards appear on the left just before the summit is reached. 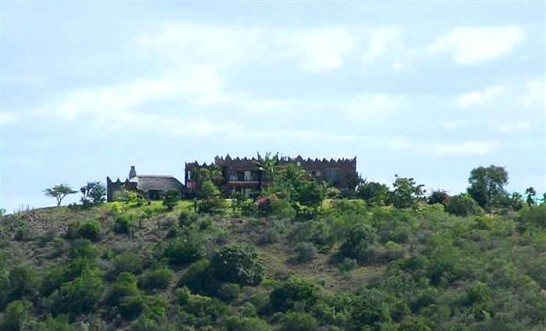 Shumba Manor can be seen on the top of the hill on the left along the western ascent / Photo: Gamtoos Tourism

The summit is reached at the 2,6 km point, where a lovely view opens up towards Hankey. For the careful observer, a glance to the left will reveal a cutting a little lower than the road. This is the narrow gauge railway which runs on a seasonal basis when the fruit ripens and needs to be transported to the markets.

Another S-bend - first to the left, then to the right - starts just after the summit, but the turn rate is so low that no reduction in speed is necessary. The descent gradient is much easier then the ascent at an easy 1:20 as wide views of neat fields and orchards appear on both sides of the road.

At various stages along this pass, there are rumble strips to remind drivers to slow down. There are a set of these rumble strips at the 6,6 km point, where the railway line crosses the road. After the final easy S-bend, the road straightens out into a long and easy descent towards Hankey. 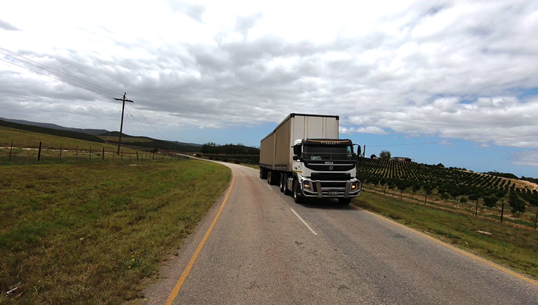 On the left is the smaller Kleinrivier, whilst the Gamtoos River dominates the scenery on the right and provides high quality water to the farmers in this fertile valley, internationally renowned for the quality of its citrus products. A little further to the east of the Kleinrivier the Yellowwoods Nature Reserve is a fine place to head for a picnic.

The closer one gets to the town, the more alert you have to be as pedestrians, livestock and stray animals can (and do) appear on the road at any time. A large factory appears on the left and the speed limit reduces to 60 kph. There is one final gentle dip as the township of Centerton is reached and the pass ends at a 4 way stop street at the 7,9 km mark. Continue straight on for another 1 km to reach the village centre. 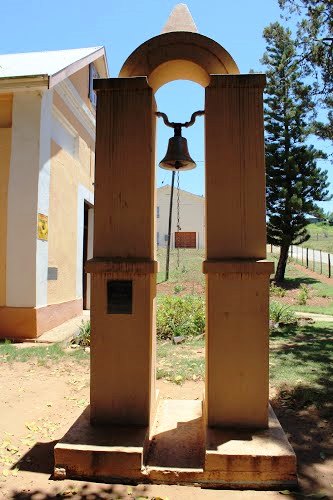 Other points of interest in Hankey are the Saartjie Baartman Memorial site at GPS S33.837217 E24.884876 and the old church in Damon Street, which dates to 1922 with the Hankey Monument in the same grounds dating to 1934.

Close to the town of Hankey there is an old irrigation tunnel dug through the side of the cliffs of the Gamtoos river. This is another good example of Enon Conglomerate - an odd, but very stable mix of round pebbles in a sandy matrix. The tunnel is called the William Phillip Irrigation Tunnel and dates back as far as 1833/4. To get to the tunnel, one has to first cross the Gamtoos River at Milton. The GPS coordinates are S33.821053 E24.847512

At first irrigation-furrows leading from the Klein River were dug to irrigate the fields in the immediate vicinity of Hankey, but William Philip had a far more ambitious plan in mind. About a kilometre from the missionary post a small, steep and rocky ridge forces the Gamtoos River to make a considerable horseshoe bend in a northerly direction and then to continue to the immediate west of the village. A valuable piece of arable land lay in this bend of the river, below the ridge. This was the piece of land which William Philip aimed at irrigating out of the Gamtoos. To be able to do this he decided to cut a tunnel through the ridge at the very spot where the river starts turning northwards and where the ridge was at its narrowest.

This is one of the oldest irrigation works in the Eastern Cape. In 1842 William Philip, son of Dr. John Philip - founder of Hankey, and labourers from Hankey began cutting a tunnel approximately 94 metres in length through the hill, 88 m of which passes through solid rock. It cost £2 500, of which £500 was contributed by the London Missionary Society, the balance being recovered by means of a water-rate on the lands to be irrigated. 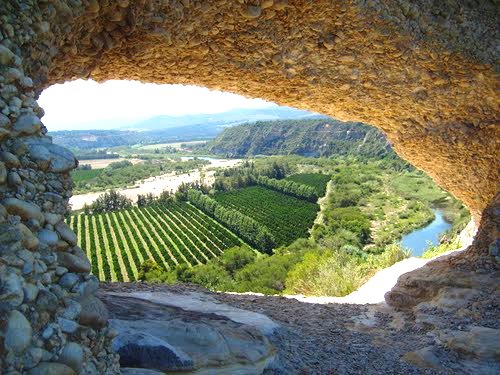 William Philip made an accurate survey of the land and in 1842 the members of his congregation with himself as engineer, surveyor and supervisor tackled the task. Such faith did Philip have in his measurements that the parisioners started tunnelling from opposite sides of the ridge which is 90 metres high. The greater part of the tunnel passed through solid rock and progress was very slow because the instruments at their disposal — pick-axes, hammers and chisels — were very primitive. After almost a year the one group of labourers could hear the digging of the other. Then they continued all the more keenly until Jan Bosnian, one of William's most trusty old workers, pierced the wall with his pick-axe from the river's end. He was so excited that he ran back along the tunnel from force of habit and then across the ridge to Hankey to break the good news to William Philip. The latter has left us the following comment: "At about two o'clock on Tuesday night, 13th August, 1844, a shot was fired at my bedroom-window. I knew that the signal meant 'the tunnel is finished.' I looked out of the window and saw the messenger running toward the town, torch in hand and shouting all the time." 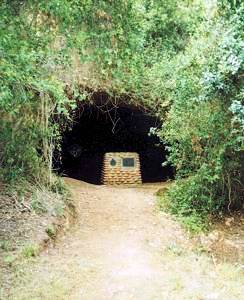 Then pandemonium broke out in the village. The villagers shouted, wept, rejoiced and laughed confusedly. The church-bell was rung, fires were kindled, torches were carried everywhere, while pots and pans served as orchestral instruments.

William Philip made the following comment on the completion of the project: "The measurements were far more accurate than I supposed, so that my first attempt in practical engineering was successful."

On the evening of 13th August William went to let the water through. He opened the inlet only partially and even then the rush of water was unstoppable. It was, according to Philip, a little river which could turn the largest mill in the country. All along the ridges a canal was then dug from the outlet across the farms of Michael Ferreira and Van Rooyen to lead the water on to the grounds of the missionary post.

It was completed in 1845, but William Philip did not enjoy the privilege of reaping the fruits of his labour. A tragedy: The builder of the tunnel, William Enowy Philip, drowned on 1 June 1845 in the Gamtoos River where the present low water bridge to Milton stands and not as is usually believed, on the opening day of the tunnel. He and his niece, also a Philip drowned together when their small boat overturned at the Milton drift.

In 1932 the tunnel and irrigation furrows were badly damaged by floods, but with Government aid they were restored and improved. In 1963 the Historical Monuments Commission recommended the proclamation of the tunnel as a historical provincial monument. The area irrigated is some 301 hectares, owned by 45 irrigators, so that the average size of a holding is only about 7 hectares.

Info on the tunnel courtesy of Artefacts.co.za

||Click to download: Rockland Heights- (Note - this is a .kmz file, which can be opened in Google earth and  most GPS models)

Published in The Eastern Cape
Tagged under
More in this category: « Langkop Pass (P0397 / R332) Baviaanskloof Remkloof Pass (N2) »
back to top