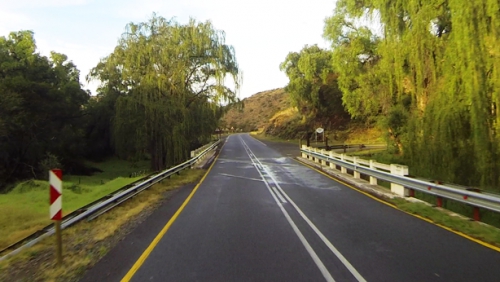 A river runs through it - Photo: Trygve Roberts

This interesting little pass is named after the Plankfontein farm, which it traverses and forms part of the R61 tarred route between Tarkastad and Cradock. It's a mixture of a pass and a poort, with the first section displaying the big pass-like cuttings, whilst the second half after the bridge near the farmstead, displays more poort like characteristics as the road mimics the course of the river down the kloof.

It takes just 4 minutes to drive the pass, which is 3,5 km long and has an altitude variance of 128m, producing a comfortable average gradient of 1:27, but the steepest part, immediately after the start and summit is quite steep at 1:8. The pass lies about 15 km north-east of Cradock and is suitable for all vehicles.

Scroll down to view the map & video. It is recommended to watch this video in HD. (Click on the "quality" button on the lower taskbar of the video screen and select 720HD.) Wait a few seconds for the video to display…..

Getting there: Head north-west out of Tarkastad along the tarred R61 for 55 km you arrive at the northern start and summit point of the pass. For those wanting to drive this pass in the opposite direction, head ENE out of Cradock on the R61 for 15 km to arrive at the southern start of the pass. As you approach the northern end of the pass, you will notice three distinct peaks in a row. The middle one is the only one with a name - Spitskop [1282m]. The road bends away towards the right hand side of the peak that is furthest to the right, where a natural neck is formed. 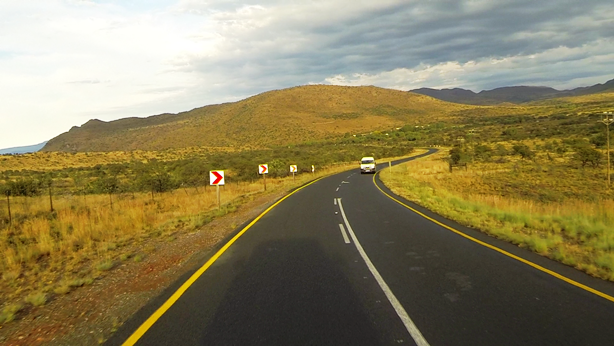 Looking west at the Plankfontein farm in the distance / Photo: Trygve RobertsEasily the single most impressive part of this pass, are the very deep and almost vertical cuttings at the summit. Here the engineers have cut a deep slice out of the hilltop to make the crest much safer. If you slow down a bit, you will notice several layers of rock with distinctly different horisontal bands of colours. These hard rocks have allowed for engineers to cut down at an angle of about 80 degrees.

Cuttings invariably present maintenance problems for the road builders, depending on the heardness and stability of the rock type. The harder the rock, the less likely the chances of rocks falling down on the roadway. On cuttings where shale is present (which is fairly soft), rockfalls and small landslides are common. In such cases many modern roads will display concrete catch walls.

The cutting is not only very deep at 12m but it's long as well, at just under 200m. As soon as the cutting is cleared the road curves away evenly to the left in a wide bend, revealing a sweeping view of the Plankfontein farm nestling at the northern foot of the Spioenkop [1318m] mountain. 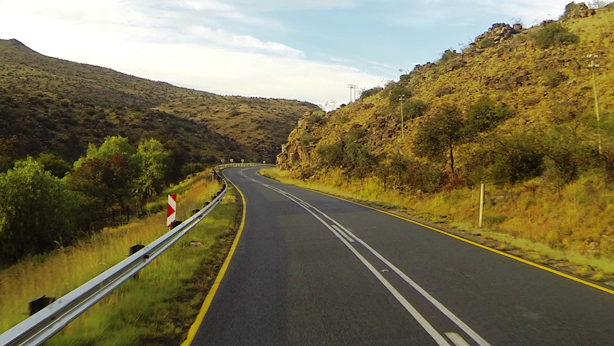 The lower section of the pass follows the course of the river / Photo: Trygve RobertsThe other two peaks to your right are Loskop [1297m] and Platberg [1348m]. The farm is attractively located in a well watered oasis next to a perennial stream. The name of the farm has been 'written' on the mountainside in the form of white painted stones, which is visible from some distance away.There are one or two gentle curves along this 1,7 km section before the farm is reached, at which point there is a tighter bend to the left, which changes the heading into the SSW.

The river, named the Plankfonteinsloot, is crossed via a small concrete bridge and the entrance to the farm appears after the bridge on the right. Drop your speed to the required 80 kph through this surprisngly lush and green section and be cautious of livestock and slow moving farm vehicles. 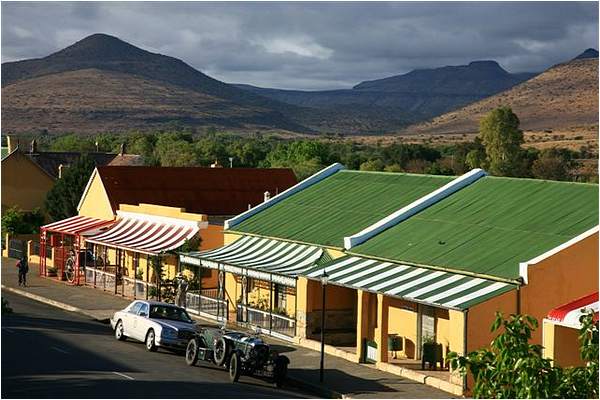 There's plenty of good accommodation in Cradock / Photo: TuinhuisieThe farm is cleared at the 2 km mark, as the normal Karoo type scenery replaces the view as the road follows the western flank of the stream. There's one more gentle S-bend at the 2,3 km point, after which the road straightens out again, still faithfully following the western bank of the stream. Once past the farm the gradients vary from flat to undulating. The pass ends at the crossing of a small side stream at the 3,5 km mark at an altitude of 1078m ASL. Remain on the R61 for 15 km to arrive in Cradock.

According to "South African Genealogies", Vol 5, p.615, Jan George Michau was the eighth child of Paulus Willem Michau, the original member of the family to settle at Cradock. His father, Johannes, came from Brunswick in Germany. The family acquired the farm "Plankfontein", which is shown on the Arrowsmith map of the area that was published in 1851. The farm is still owned by the family. [Source: RootsWeb]

||Click to download: Plankfontein Pass (R61) (Note - This is a .kmz file which can be opened in Google Earth and most GPS software)

Published in The Eastern Cape
Tagged under
More in this category: « Skaapkraalpoort (R344) Perdenek (R396) »
back to top