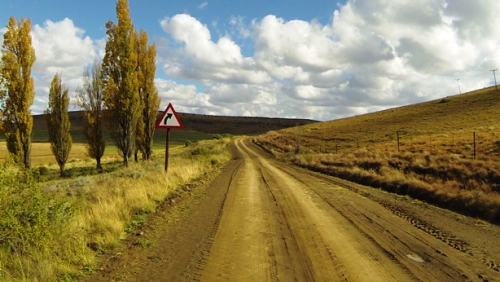 Wintersnek is located on a minor gravel road - the P3222 - about 21 km north of Barkly East, as the crow flies. It's a fairly straight-forward pass, with a long, almost straight climb to the 1991m high summit, after which there is a direction change into the east, followed by a short double apexed left hand curve to the end of the pass next to an unmistakable group of very tall cypress trees close to the roadside. The pass is 5 km long and has gradients of 1:11. It offers spectacular views over the New England area and the Witteberg mountains. However, due to the gentle nature of this pass, it would be best to plot its position on your GPS otherwise you might miss it. It can be driven in any vehicle in fair weather, but will be slippery when wet.

Getting there: There are three ways to access this pass. From the east off the R396 or from the west off the R58 from two different access points. To access the pass from the east head along the gravel R396 towards Rhodes. At the fork at the Kraai River bridge, don't turn right to Rhodes, but keep left and head to Lundin's Nek. Turn left (west) at GPS S30.736960 E27.746410. This turn-off is about 16 km north of the Kraai River bridge. Drive over the Ballochs Pass for 14 km to arrive at the eastern start of the Wintersnek pass. 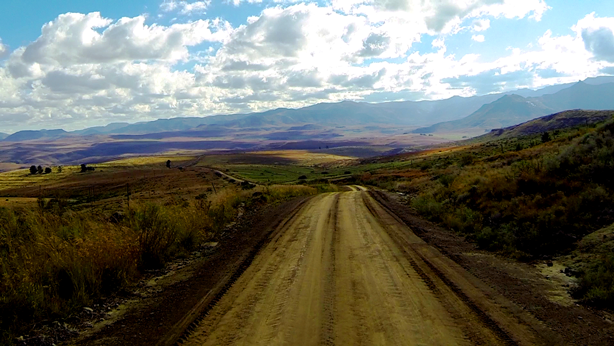 Summit views looking west / Photo: Trygve RobertsFor those wanting to drive this pass in the opposite direction (and how we filmed it), it can be accessed off the tarred R58 at GPS S30.904459 E27.438588, heading north-east on gravel for 7 km where there is a fork. Keep left at the fork and drive north-east for 18 km to arrive at the western start of the pass at the crossing of the Three Drifts River.

The third routing is to head west out of Barkly East and almost immediately outside the town, turn right (north) onto a gravel road at GPS S30.955700 E27.563422. Remain on this road for 6 km where you will cross the Kraai River via the Loch Bridge (a national monument). Continue in a north-westerly heading for 4 km to arrive at a fork. Turn right at the fork and head north for 12 km to arrive at the Wintersnek pass, about two-thirds along its western descent. This is not the optimal routing, as you will end up only driving half of the pass. 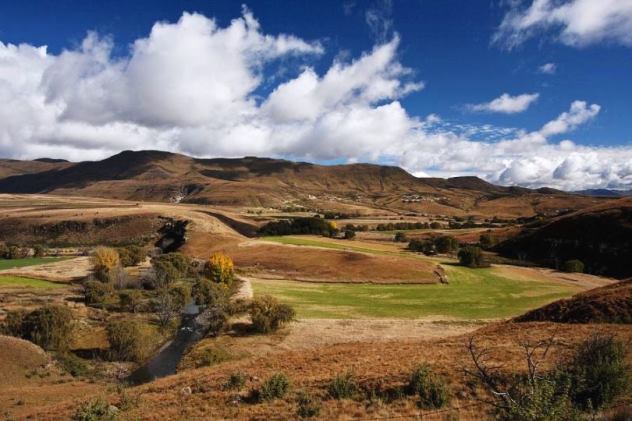 The Sterkspruit paints a lovely picture / Photo: PanoramioWe filmed the pass from west to east which offers the better scenic value and especially so if you're driving this route in the afternoon, where the light will be behind you. About 1 km before the western end of the pass, there is a farm on the left hand side of the road, named Pitlochrie (after a similarly named village in Scotland). The western start is at the crossing of the Three Streams River bridge from where the road immediately begins climbing at a stiff gradient of 1:11 via a sharp right hand initiated S-bend, adjacent to the Aston farmstead..

On exiting this S-bend, the road heads into the south-east and remains on that heading for 2,5 kms. After climbing out of the river valley, the gradient eases off to 1:20 at the 1 km mark. The scenery is magnificent and makes up for the long, straight road towards Wintersnek. At this high altitude, there are very few trees and most of the hillsides consist of rolling grasslands, which makes excellent pasturage for sheep and cattle.

Unlike most of the Eastern Cape, this road has adequate fencing on both sides of the road, so you will be unlikely to find livestock on the road. 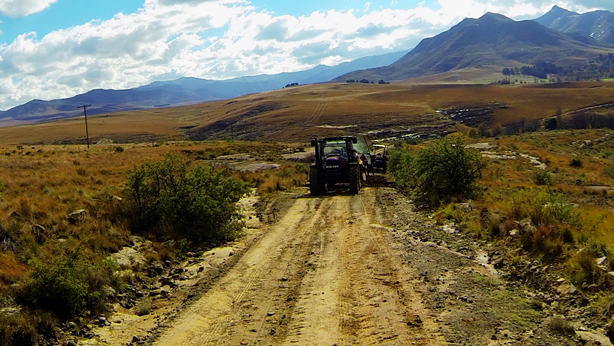 Road repairs in this part of the Eastern Cape make extensive use of tractors / Photo: Trygve Roberts

At the 1,7 km mark, a large solitary pine tree on the right hand side of the road, gives a warning of the looming intersection, where the road from Barkly East via Loch Bridge joins the Wintersnek road, This is a busier road than the one you're on, so be aware of traffic coming up from the right.

The road continues to climb at a gentle gradient of 1:25 till the 2,6 km point, where a gentle left hand curve takes the heading directly into the east. At the 3 km mark, as the left hand bend is completed, the gradient gets steeper again at 1:11, as the road heads purposefully towards the Wintersnek itself.

Just before the neck, there is a mild S-curve and suddenly the summit of 1991m is reached at the 4,4 km point. A minor gravel road intersects from the right immediately after the summit. Lovely sweeping views of green hills and valleys open up after the summit and the road kinks slightly to the left and levels off for 300m. During the rainy season, this section is often muddy and slippery.

If you have time, stop at the summit and look back down the valley that you have just ascended. It is picture perfect with open meadows, deep valleys with fast flowing streams and topped off with a rim of tall mountains. The air is crisp and clean here and even though there is no spot to have a picnic, at least alight from your vehicle and savour the moment.

A lonely farmhouse can be seen far ahead lower down the valley to the right.  Another small change in direction towards the left takes place at the 4,7 km mark and a group of very tall cypress trees marks the end of the pass. Continue for a further 5 km to arrive at Ballochs Pass.
.

||Click to download: Wintersnek (P3222)  (Note - This is a .kmz file which can be opened in Google Earth and most GPS software systems)

Published in The Eastern Cape
Tagged under
More in this category: « Dulcie's Nek (R393) Ballochs Pass (P3222) »
back to top